The Major Signs of the Day of Judgment (part 5 of 7): The Return of Jesus

Description: The following series of articles mention the Major Signs that will occur shortly before the end of the world and the coming of the Day of Judgment.  This part includes some of the many sayings of Prophet Muhammad about the return of Jesus. 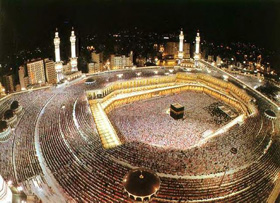 Another one of the amazing signs shortly before the Day of Judgment is the return and descending of Jesus, peace and blessings of God be upon him, to this earth again.  God says in the Quran:

“And because of their saying (in boast), ‘We killed Messiah Jesus, son of Mary, the Messenger of God,’ - but they did not kill him and nor did they crucify him, but the resemblance of Jesus was put over another man (and they killed that man), and those who differ therein are full of doubts.  They have no (certain) knowledge, they follow nothing but conjecture.  Surely, they did not kill him.  But God raised him (Jesus) up (with his body and soul) unto Himself (and he is in the heavens).  And God is Ever All-Powerful, All-Wise.  And there is none of the people of the Scripture (Jews and Christians), but must believe in him (Jesus) before his death.  And on the Day of Resurrection, he (Jesus) will be a witness against them.” (Quran 4:157-159)

The words, “And there is none of the people of the Scripture (Jews and Christians), but must believe in him (Jesus) before his death,” refer to Jesus’ worldly death after he returns to earth.  At that time, the Jews and Christians will finally believe in him as a Messenger of God and a human being only, as that will be the only option possible at that time.  In fact, some scholars state that part of the wisdom in Jesus’ return is the final and undeniable refutation of the Jews’ claim that they had crucified him and to bring an end to the false claim that he was the Son of God.

There are numerous hadeeth which speak about the coming of Jesus during the last days of this world.  They give a description of many of the acts of Jesus after his return.

As is clear from the last hadeeth presented under the section concerning the Dajjaal, Jesus’ return will occur while the false messiah is upon the earth.  The following is the continuation of the above hadeeth:

“He [the Dajjaal] would then call a person brimming with youth and strike him with the sword and cut him into two pieces and (make these pieces lie at a distance which is generally) between the archer and his target.  He would then call (that young man) and he will come forward laughing with his face gleaming (with happiness) and it would be at this very time that God would send Christ, son of Mary, and he will descend at the white minaret in the eastern side of Damascus wearing two garments lightly dyed with saffron and placing his hands on the wings of two Angels.  When he would lower his head, there would fall beads of perspiration from his head, and when he would raise it up, beads like pearls would scatter from it.  Every unbeliever who would smell the odor of his being would die and his breath would reach as far as he would be able to see.  He would then search for him (the Dajjaal) until he would catch hold of him at the gate of Ludd and would kill him.”

Al-Bukhari and Muslim record that the Prophet, may the mercy and blessings of God be upon him, stated:

“By Him in Whose hand is my life, the son of Mary (may peace be upon him) will soon descend among you as a just judge.  He will break crosses, kill swine and abolish Jizyah[1]  and the wealth will pour forth to such an extent that no one will accept it.”

At the time of his appearance, he will bring an end to all of the false beliefs which crept into Christianity.  Thus, he will break all of the crosses, as they signify a worship of him.  Similarly, at his time, he will not accept the jizyah because there will be no excuse for any Jew or Christian not to believe in him and follow him.  In another narration of the same hadeeth, there is a mention of the state of the followers of Jesus at that time.  The Prophet said:

“He would leave the young she-camel and no one would endeavor to (collect Zakat on it).  Spite, mutual hatred and jealousy against one another will certainly disappear and when he summons people to accept wealth, not even one would accept it.” In other hadeeth, the following is described, “Peace will prevail and people will use their swords as sickles.  Every harmful beast will be made harmless; the sky will send down rain in abundance, and the earth will bring forth its blessings.  A child will play with a fox and not come to any harm; a wolf will graze with sheep and a lion with cattle, without harming them.”[2]

At the time of Jesus’ return, the Muslims will be lead by the Mahdi (A guided leader), as is mentioned in various hadeeth, such as the Prophet’s words:

“What will be your state when the son of Mary descends among you and there will be an Imam among you?” (Al-Bukhari, Muslim)

In another hadeeth in Saheeh Muslim, it reads:

“A section of my people will not cease fighting for the Truth and will prevail till the Day of Resurrection.” He then said, “Jesus son of Mary would then descend and their (Muslims’) commander would invite him to come and lead them in prayer, but he would say, ‘No, some among you are commanders over some (among you).  This is the honor from God for this Nation.’”

This hadeeth is evidence that when Jesus returns, he will not return in the role of being a new messenger with a new law.  Instead, he will return as a follower of the Prophet Muhammad and submitting to the laws of Islam.  In fact, another hadeeth in Saheeh Muslim describes Jesus as performing the Islamic ritual of Hajj (pilgrimage).

A hadeeth in Saheeh Muslim further describes that Jesus will remain ruling among the people for seven years.  The Prophet said:

“Then people would live for seven years that there would be no rancor between two persons.  Then God would send cold wind from the side of Syria that none would survive upon the earth having a speck of good in him or faith in him but he would die, so much so that even if some amongst you were to enter the innermost part of the mountain, this wind would reach that place also and that would cause his death.” He further said, “Only the wicked people would survive and they would be as careless as birds with the characteristics of beasts.  They would never appreciate the good nor condemn evil.”

As stated earlier, when one of these great signs appear, the others are soon to follow.  It is in the context of Jesus’ return that the Prophet also spoke about Gog and Magog.

[1] Jizyah is the “exemption tax” that non-Muslims pay to the Islamic state in lieu of military service.

[2] These items are mentioned in various hadeeth recorded by Ahmad, ibn Hibbaan, Abu Dawood and others.