God’s Preservation of the Sunnah (part 6 of 7): Traveling for the Purpose of Seeking Hadeeth

Description: The importance given to attaining knowledge in Islam leads many Muslims to undertake long journeys in order to collect and confirm the sayings and actions of the Prophet Muhammad. 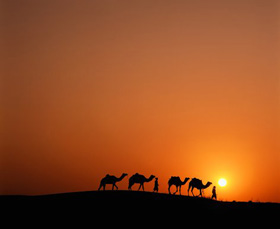 Another unique phenomenon that appeared and assisted in the preservation of the Sunnah was the traveling in search of hadeeth, in order to check the sources and gather more hadeeth together.  Among all of the different religious communities of the world it has been only the Islamic nation that has been blessed with two particular characteristics that have saved it from losing its original and pure teachings.  These two unique characteristics are the use of the Isnad, which has just been discussed, and the journeys undertaken in search of hadeeth, that shall presently be discussed.  The great desire for religious knowledge among the Muslims led individuals to travel, on their own, for months at a time simply to collect or confirm just one saying of the Prophet, may the mercy and blessings of God be upon him.  It was this devotion to hadeeth and willingness to sacrifice any aspect of this worldly life that greatly helped in the complete preservation of the hadeeth of the Prophet.  M. Zubayr Siddiqi has written:

All these various generations of “Traditionists” displayed marvelous activity in the pursuit of hadeeth.  Their love for the subject had been profound.  Their enthusiasm for it knew no bounds.  Their capacity to suffer for the sake of it had no limit.  The rich among them sacrificed riches at it’s alter; and the poor among them devoted their lives to it in spite of their poverty.[1]

Why was this desire for knowledge so great among these early Muslims? No one can answer this question completely but there must have been many reasons for this strong desire.  These reasons must have included the following:

(a)   The knowledge of hadeeth was known by these pious souls to lead them to the practice of the Prophet and, furthermore, they knew that by following his footsteps they would become closer to God.

(b)  The Quran and the Prophet both stressed the virtues and importance of attaining knowledge.  God says:

“…The knowledgeable among His bondsmen fear God alone…” (Quran 35:28)

Among the Prophet’s many statements on this topic are:

“Whoever goes out along a path in search of knowledge, God makes a path to Paradise easy for him…”[2] (Saheeh Muslim)

“When the son of Adam dies all of his good deeds come to an end except three: a perpetual charity, beneficial knowledge [he left behind from which people gain some benefit] and a pious child who supplicates for him.”[3] (Saheeh Muslim)

The early scholars recognized the importance of attaining knowledge and they also recognized that no knowledge is better than knowledge about the Creator.  Therefore, they did their best to learn the teachings of His Prophet.

Examples from the early years will give a clearer picture of these journeys in search of hadeeth.  In reality, however, traveling in search of hadeeth can be said to have begun during the time of the Prophet himself.  That is, even at that time, people would come from outside of Madinah to ask the Prophet about specific matters.  In some cases, they would come to the Prophet to verify what has been reported by the Prophet’s representatives.  In al-Bukhari and Muslim it can be seen that the other Companions looked forward to such an event.  This was because, as Anas stated, they were prohibited from asking the Prophet too many questions, so they would look forward to the coming of an intelligent Bedouin who traveled to come to the Prophet to ask him specific questions.

The following examples are of Companions who traveled in order to verify hadeeth that they themselves heard from the Prophet.[4]

Imam al-Bukhari recorded in his Sahih that Jaabir ibn Abdullah traveled for one month to get a single hadeeth from Abdullah ibn Unais.  In a version recorded by al-Tabaraani, it states that Jabir said, “I used to hear a hadeeth on the authority of the Prophet about retribution and the one who narrated that hadeeth [directly from the Prophet] was in Egypt, so I bought a camel and traveled to Egypt...”[5]

The Companion Abu Ayyoob traveled all the way to Egypt to ask Uqba ibn Amr about one hadeeth.  He told Uqba that only he and Uqba were left who had heard that particular hadeeth directly from the Prophet.  After hearing the hadeeth his business was completed in Egypt and he returned to Madinah.

One of the Companions traveled to visit Fadhala ibn Ubaid and told him that he came not to visit him but only to ask him about a hadeeth that they had both heard from the Prophet and the Companion was hoping that Fadhala had the complete wording of the hadeeth.[6]

From the stories of the Companions one can conclude that they traveled in search of hadeeth for basically two reasons:

(a)   To hear a hadeeth from a fellow Companion concerning which they did not have the honor of hearing it themselves directly from the Prophet, thereby adding to their knowledge of hadeeth.

In the era of the students of the Companions (termed ‘Followers’), the desire and willingness to travel in order only to hear or confirm a hadeeth of the Prophet did not diminish.  Madinah, having been the home of the Prophet for many years, the home of the Sunnah and the city where many of the Companions resided after the Prophet’s death, was probably the main center of attraction, but, in fact, any place where it was known a particular hadeeth could be heard would attract “travelers.”

Many examples could be given.  Al-Khateeb al-Baghdadi has written an entire work on the subject of traveling in search of hadeeth.  His work is entitled Al-Rihla fi Talab al-Hadeeth (“Travels in Search of Hadeeth”).  What makes this work even more interesting is that it is not simply concerned with scholars traveling to learn hadeeth.  This was done by almost every scholar in the history of Islam.  Indeed, if a scholar did not travel that was usually pointed out as something strange, as the norm was to travel.  However, this book, as pointed out by the editor of the work Noor al-Deen Itr, is about travels in search of just one hadeeth and not hadeeth in general..![7]

[6] This incident was recorded by Abu Dawood.