God’s Preservation of the Sunnah (part 2 of 7): The Recording of Hadeeth

Description: The following series of articles discusses the means used throughout history to ensure that the Sunnah, or teachings of Prophet Muhammad, remained authentically preserved and free from alteration and interpolation.  Part Two: Were the sayings of the Prophet (hadeeth) written during his life and immediately after his death? 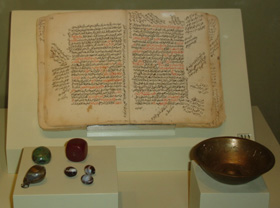 Before discussing this topic, it should be noted that, in order for something to be preserved, it is not a necessary condition that it be recorded or written down.  That is, simply because something was not written down, it does not mean that it was not accurately and correctly preserved.  Furthermore, the writing of something down itself is not sufficient for the preservation of something.  It is possible that something is recorded incorrectly.  Both of these points were duly noted by the scholars of hadeeth.  They did not require hadeeth to be written down for them to be accepted although they did recognize the importance of such a physical recording and many times, depending on the personality involved, preferred the written record over the verbal record.  These scholars also realized that the mere recording of something is not sufficient.  It must also be ascertained that it was recorded properly.  Hence, scholars of hadeeth would accept or prefer written reports of scholars over memorized reports only if it was known that those scholars were proficient and correct in their writing.

It has been one of the favorite practices of many of the Orientalists to constantly state the “fact” that hadeeth were not recorded at first but were, instead, passed on only orally for the first two centuries after the Hijrah (Arabic calendar).  Therefore, hadeeth are not much more than folklore and legend that was passed on orally and in a haphazard fashion for many years.  Unfortunately, this is a misconception that has become quite widespread amongst many who have sufficed with a mere shallow research of the subject.  In reality, this false claim and incorrect view has, by the grace of God, been refuted by numerous Muslim scholars in various doctoral dissertations in the Muslim world as well as at Western Universities, such as the dissertations of Muhammad Mustafa Azami (1967), published as Studies in Early Hadeeth, and  Imitiyaz Ahmad’s The Significance of Sunna and Hadeeth and their Early Documentation from Edinburgh in 1974.

1.    Al-Daarimi and Abu Dawood in their Sunans (books) recorded that Abdullah ibn Amr ibn al-As stated that they used to record everything they heard from the Prophet.  They were warned against doing so as, it was argued, the Prophet was a human being who may be angry at times and pleased at others.  Abdullah stopped writing his hadeeth until they could ask the Prophet about this issue.  The Messenger of God told him:

“Write [my hadeeth], by the One in whose hand is my soul, nothing comes out [the Prophet’s mouth] except the truth.”[1]

That is, whether he was angry or pleased what he spoke was always the truth.

2.    Al-Bukhari, in his Sahih (book), recorded that Abu Hurairah said, “One can find none of the Companions of the Messenger of God relating more hadeeth than I, except Abdullah ibn Amr because he used to record the hadeeth while I did not do so.”[2]

3.    Al-Bukhari recorded that a person from Yemen came to the Prophet on the day of the Conquest of Mecca and asked him if he could get the Prophet’s speech recorded, and the Prophet approved and told someone:

“Write it for the father of so and so.”

4.    Anas narrated the statement, “Secure knowledge by writing it.”  This hadeeth has been related by a number of authorities but mostly with weak chains.  There is a dispute concerning whether or not it is actually a statement of the Prophet or of some Companion.  However, according to al-Albani, the hadeeth, as recorded by al-Haakim and others, is authentic.[3]

There is no question, therefore, that the recording of hadeeth began during the lifetime of the Messenger of God himself.  This practice of writing hadeeth continued after the death of the Messenger of God.  Al-Azami, in his work Studies in Early Hadeeth Literature, has listed and discussed some fifty Companions of the Prophet who had recorded hadeeth.[4]  Note the following:

Abdullah B. Abbas (3 B.H.-68 A.H.)… He was so eager for knowledge that he would ask as many as 30 Companions about a single incident… It seems he wrote what he heard and sometimes even employed his slaves for this purpose… The following derived hadeeth from him in written form: Ali b. Abdullah ibn Abbas, Amr b. Dinar, Al-Hakam b. Miqsam, Ibn Abu Mulaikah, Ikrimah… Kuraib, Mujahid, Najdah… Said b. Jubair.[5]

Abdullah B. Umar B. al-Khattab (10 B.H.-74 A.H.).  He transmitted a large number of ahadeeth, and was so strict in relating them that he did not allow the order of a word to be changed even though it would not have altered the meaning… He had books.  One Kitab [book] which belonged to Umar, and was in his possession, was read to him by Nafi several times… The following derived hadeeth from him in written form: Jamil b. Zaid al-Tai… Nafi client of ibn Umar, Said b. Jubair, Abd al-Aziz b. Marwan, Abd al-Malik b. Marwan, Ubaidullah b. Umar, Umar b. Ubaidullah …[6]

Al-Azami also compiled a list, discussing each personality individually, of forty-nine people of “the first century successors” who recorded hadeeth.[7]  Al-Azami goes on to list eighty-seven of “the scholars covering the late first and early second centuries” who recorded hadeeth.[8]  Then he lists “from the early second century scholars” 251 people who collected and recorded hadeeth.[9]  Thus al-Azami has produced a list of 437 scholars who had recorded hadeeth and all of them lived and died before the year 250 A. H.  Many of them are from before the time of Umar ibn Abdul Azeez, who has been wrongly credited with having been the first person to ask for the collection of hadeeth.  The story of Umar ibn Abdul Azeez has actually been misunderstood and it does not mean that no one collected hadeeth before him.[10]

To quote al-Azami, “Recent research has proved that almost all of the hadeeth of the Prophet was [sic] written down in the life of the companions, which stretched to the end of the first century.”[11]  This last statement is partially based on al-Azami’s own research in which he has mentioned many Companions and Followers who possessed written hadeeth.  Elsewhere, he himself writes,

I have established in my doctoral thesis Studies in Early Hadeeth Literature that even in the first century of the Hijra many hundreds of booklets of hadeeth were in circulation.  If we add another hundred years, it would be difficult to enumerate the quantity of booklets and books which were in circulation.  Even by the most conservative estimate they were many thousands.[12]

[2] Ibn Hajar, commenting on this hadeeth, explained how Abu Huraira could have narrated so many more hadeeth than Abdullah ibn Amr.  See ibn Hajar, Fath, vol. 1, pp. 206-8.  One aspect that he neglected to mention is Abu Hurairah’ dying some sixteen years after Abdullah ibn Amr.

[10] The story, as recorded by al-Bukhari, is that Umar (61-101) wrote to Abu Bakr ibn Muhammad (d. 100) saying, “Look for the knowledge of hadith and get it written, as I am afraid that religious knowledge will vanish and the religious learned men will pass away.  Do not accept anything save the hadith of the Prophet.”  He also sent letters to Saad ibn Ibraaheem and al-Zuhri asking them to do the same.  It has been incorrectly stated by some, for example, M. Z.  Siddiqi, that it was this request of Umar’ that led to the beginning of the collections of hadith.