Description: An overview of Muslims’ contribution to the advancement of science in the Dark Ages. 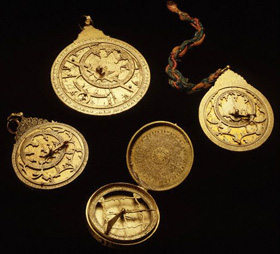 Few centuries before Jesus the outstanding Greek civilizationcame to exist, bringing into the world such knowledgeable minds as Aristotle, Euclid, Socrates, Galen and Ptolemy. Their contributions to philosophy, mathematics, geography, astronomy and medicine became the corner stone of modern science.

Then the Romans ceased control and subsequently Christianity arisen bringing together the calendar, as we know it – BC and AD. The Romans gave in to the invasion of barbarian tribes (Anglo-Saxons, Franks, Vandals), the forefathers of today's Europe. Devastated, the empire fell. Following its collapse, approximately from the late 5th century, began the period of the so called dark ages. It lasted until late 15th century when Columbus discovered America marking the rise of the Renaissance, otherwise known as the Revival.

Much has been written about the period of Antiquity, praising the Greco-Roman scientific and cultural achievements. The libraries are full of writings on the Renaissance, praising the brilliancy of that age. But there is almost nothing on the ten centuries in between. The European history bears records of mainly the ruling dynasties, religion, the feudal system, giving little attention to the development of science in that time. The image that Europe went from the splendor of Greece straight into darkness and then suddenly back into brightness has been dominating the scholastic thought for years. Devoid of any logic, this statement provokes reasonable doubts about the missing link of ten centuries long.

To explain this mysticism, one might want to take a closer look at the history of other parts of the world and especially the civilizations that existed in close geographic proximity to the European continent. It's absolutely astonishing that the period of the dark ages in north Europe coincides, and exactly, with the apogee of the Muslim civilizationin the East and south Europe. Islamic civilizationeffectively came into being in 622 A.D. when Prophet Mohammed and his companions fled from hostile Mecca to Medina (Yathrib) where they found refuge and established the first Islamic state.

By the year 750 A.D. Islam spread and covered lands and countries from Spain to the boarders of China. Along with Islam came new a new spirit of learning resulting scientific discoveries, and technology inventions. The importance of learning had been recognized by the Muslims as means of sharing creativity between nations thus contributing to their effective communication. The Prophet Mohammed urged his followers to seek knowledge recognizing the genuine achievements of the Chinese, Indians, Africans..etc.. Great thinkers as Al-Biruni, Al-Khwarizmi, Al-Idrissi, Al-Khindi, Ibn Sina, Al-Razi, Ibn Khaldun, Al-Khazin, Ibn al-Haytham, Al-Farabi, Al-Ghazali, al-Jazari and hundreds more, came various backgrounds.

Non-Muslim like Ishaq Ibn Hunayn and Hunayn Ibn Ishaq – Nestorian Christian scientists of the Abbasid court, or the astronomer Thabit Ibn Qurrah – a Sabean, or Hasadai Ibn Shaprut and Ibn Maimon –Jews from Muslim Spain and many more thrived and had respectable and influential positions in the Muslim societies. The Muslim civilization become the first and by far the most multiethnic example of humanity. With equal dedication, Arabs, Turks, Persians, Berbers and Kurds were seeking solutions to numerous societal problems in science, medicine, engineering, agriculture, .etc.. Their efforts resulted in spectacular architecture, creative art, libraries, hospitals, universities, geographic discoveries such as mapping of the world, observatories and basics of astronomy and much more – all were as George Sarton said:

"The miracle of Arabic science, using the word miracle as a symbol of our inability to explain achievements which were almost incredible…unparalleled in the history of the world." George Sarton

Due to the politics of the time, scientists to follow failed to acknowledge the crucial timing and the enormous contribution of the Muslim civilization to the development of modern science and technology. They advocated the presumption that Europe owes all its advances to ancient Greece. However, there are undeniable facts that during the Spanish re-conquest of Muslim settlements, Toledo in 1085 in particular, vast amounts of Muslim works were found and translated. Furthermore, the two centuries of the Crusades were not only filled with war and bloodshed, but also provided cultural interaction. All together, it makes it difficult to believe that the dark ages were really as dark as portrayed.

Without the enormous amounts of borrowings from the Muslim civilization, we would be without the Arabic numerals which we use daily for our calculations and mathematics, there would be a sufficient lack of agriculture, domestication of animals for food, clothing and transportation; spinning and weaving; building; drainage and irrigation; water wheels and windmills; metal-working and tools and basic weapons; sailing ships; astronomical observation; clocks, paper, writing and the keeping of records; laws and civic life; coinage; abstract thought and most of our religious ideas and symbols. And as Wickens concludes,

"There is virtually no evidence for any of these basic things and processes and ideas being actually invented in the West." Wickens

This article was originally a review by the author, Camilla Sayf, dated Sat 05 July, 2003, on the publication Introduction to Muslim Science, by FSTC Limited (Foundation for Science Technology and Civilization).[1]

[1] Disclaimer: Not all views of this author are held by IslamReligion.com.