The Miraculous Quran (part 3 of 11): A Sacred Scripture Must be From God

Description: In order for a religion to be true, it must be from God in a total sense, in part and parcel, and not merely its origin.

My First Parameter: If it is God’s Religion I am Looking for, the Sacred Scripture Must be From God 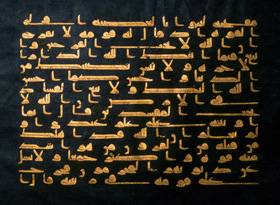 In my study of other religions, one of my goals was to read each religion’s sacred scriptures directly, in order to understand directly from the source what the religion was all about.  This is obviously what piqued my curiosity in the Quran.

I already had a strong belief in God and was convinced of the existence of a Supreme Being.  In fact, for a while, I was sometimes a Christian and sometimes simply a deist, following in the footsteps of Voltaire and many of the “founding fathers” of the United States.

Already believing in God, therefore, my first parameter for a true religion was that the religion must have God as its original source.  No one can know the details about God except God.  He is above and beyond the realm of human experience.  More importantly, no one knows how He should be worshipped except Him.  No one knows what way of life is pleasing to Him except Him.  Although humans are able to come to many sound conclusions about God, no human could logically claim that he has somehow—independent of revelation from God—discovered the way in which God should be worshipped and the way that is pleasing to God.  Thus, if the ultimate goal in one’s heart is to truly please and worship God as He should be worshipped, then one has no alternative but to turn to Him for guidance and direction.

Based on this first premise, any man-made religion is not a logical alternative.  No matter how hard humans may try, they cannot authoritatively speak about how God is supposed to be worshipped.

It is important to note that this parameter does not mean that one time God played a role in the formation of a specific religion.  No, this parameter means that the entire scope of the teachings come from God.  There are some religions that may have originated from God but, afterwards, their adherents felt free to rely upon human reasoning to adjust, modify or alter the religion.  In the process, they actually created a new religion, different from that which God had revealed.  This, once again, completely defeats the purpose.  What God revealed does not need any improvement or change from humankind.  Any such change or alteration means a deviation away from what God revealed.  Thus, any change or alteration will only take humankind away from the true and proper way of worshipping God.  Furthermore, God is more than capable of revealing a perfect revelation for any time or circumstance.  If there were any need to alter or change any of God’s laws, the authority for that also rests only with God.  In other words, God is free to change some of His laws due to His wisdom and knowledge, for example, out of mercy or as a form of punishment upon His servants.  He may do this by sending a new revelation or even by sending a new prophet.  With that, there is no logical problem.  But there is a grave problem when humans take it upon themselves to “fix” God’s revelation.

Thus, the first parameter states that the religion originates with God.  However, this is not sufficient.  The second parameter is that the teachings from God must be preserved in their original form.  The logic behind this point should be obvious.  If the original revelation came from God but was then later tampered and distorted by humans, one now has a mixture of God’s religion and human interpolation.  This is no longer God’s pure religion.  Although this may seem like an obvious premise, it is amazing to see many people who have not even considered this point, blindly following scriptures or teachings that cannot be historically authenticated.

The First Miraculous Aspect of the Quran: Its Detailed Preservation

In fact, this is one of the first things that impressed me concerning the Quran.  Even those who were clearly anti-Islam in their writings, such as Sir William Muir, would admit that the Quran that we have today was preserved since the time of the Prophet, may the mercy and blessings of God be upon him.[1]  In fact, even those who tried to be most critical and cast doubt upon the complete authenticity of the Quran, such as Jeffery, impressed me even further as to the amount of information that we have concerning the history of this text.

To fully appreciate this point, one must put it into the context of my Christian background.  Incidentally, this paper is in no way meant to be a critique of Christianity.  However, it is the background from which I came and it was the litmus test by which I examined other religions.  Therefore, I did a lot of cross comparisons between Christianity and other religions, including Islam.  Hence, I have no choice but to refer to Christianity during the course of this paper as this is a paper about my experience.

[1] For quotes from numerous non-Muslim writers affirming the authenticity of the Quran, see Dialogue Between Islam and Christianity: Discussion of Religious Dogma Between Intellectuals from the Two Religions (Fairfax, VA: Institute of Islamic and Arabic Sciences in America, 1999), pp. 295f.