Description: A series of articles compelling the reader to ponder over the marvels of the Quran.  Part 9: Some more examples that show the truthfulness of the Quran. 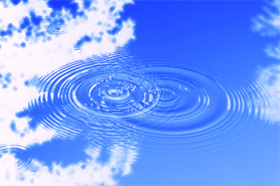 Seeing as back fourteen centuries ago people probably did not understand much about time zones, the Quran’s statements about this subject are considerably surprising.  The concept that one family is having breakfast as the sun comes up while another family is enjoying the brisk night air is truly something to be marveled at, even in modern time.  Indeed, fourteen centuries ago, a man could not travel more than thirty miles in one day, and thus it took him literally months to travel from India to Morocco, for example.  And probably, when he was having supper in Morocco, he thought to himself, “Back home in India they are having supper right now.” This is because he did not realize that, in the process of traveling, he moved across a time zone.  Yet, because it is the words of Allah (God), the All-Knowing, the Quran recognizes and acknowledges such a phenomenon.

In an interesting verse it states that when history comes to an end and the Day of Judgment arrives, it will all occur in an instant; and this very instant will catch some people in the daytime and some people at night.  This clearly illustrates Allah’s divine wisdom and His previous knowledge of the existence of time zones, even though such a discovery was non-existent back fourteen centuries ago.  Certainly, this phenomenon is not something which is obvious to one’s eyes or a result of one’s experience, and this fact, in itself, suffices as proof of the Quran’s authenticity.

Returning one final time to the subject of good guesses for the purpose of the present example, the odds that someone guessed correctly about all three of the aforementioned subjects - the sex of bees, the movement of the sun and the existence of time zones - are one in eight!

Certainly, one could continue on and on with this example, drawing up longer and longer list of good guesses; and of course, the odds would become higher and higher with each increase of subjects about which one could guess.  But what no one can deny is the following: the odds that Muhammad, may the mercy and blessings of God be upon him, an unlettered man, guessed correctly about thousands and thousands of subjects, never once making a mistake, are so high that any theory of his authorship of the Quran must be completely dismissed - even by the most hostile enemies of Islam!

Indeed, the Quran expects this kind of challenge.  Undoubtedly, if one said to someone upon entering a foreign land, “I know your father.  I have met him,” probably the man from that land would doubt the newcomer’s word, saying, “You have just come here.  How could you know my father?” As a result, he would question him, “Tell me, is my father tall, short, dark, fair? What is he like?” Of course, if the visitor continued answering all of the questions correctly, the skeptic would have no choice but to say, “I guess you do know my father.  I don’t know how you know him, but I guess you do!”

The situation is the same with the Quran.  It states that it originates from the One who created everything.  So everyone has the right to say, “Convince me! If the author of this book really originated life and everything in the heavens and on the earth, then He should know about this, about that, and so on.” And inevitably, after researching the Quran, everyone will discover the same truths.  Additionally, we all know something for sure: we do not all have to be experts to verify what the Quran affirms.  One’s Iman (faith) grows as one continues to check and confirm the truths contained in the Quran.  And one is supposed to do so all of his life.

May God (Allah) guide everyone close to the truth.

An engineer at the University of Toronto who was interested in psychology and who had read something on it, conducted research and wrote a thesis on Efficiency of Group Discussions.  The purpose of his research was to find out how much people accomplish when they get together to talk in groups of two, three, ten, etc.  The graph of his findings goes up and down at places, but it reaches the highest point at the variable of two.  The findings: people accomplish most when they talk in groups of two.  Of course, this discovery was entirely beyond his expectations, but it is very old advice given in the Quran (Surah Saba 34:46):

“Say, ‘I exhort you to one thing - that you stand for Allah, [assessing the truth] by twos and singly, and then reflect...’”

Additionally, the 89th chapter of the Quran (Surah al-Fajr 89:7) mentions a certain city by the name of ‘Iram (a city of pillars), which was not known in ancient history and which was non- existent as far as historians were concerned.  However, the December 1978 edition of National Geographic introduced interesting information which mentioned that in 1973, the city of Elba was excavated in Syria.  The city was discovered to be 43 centuries old, but that is not the most amazing part.  Researchers found in the library of Elba a record of all of the cities with which Elba had done business.  Believe it or not, there on the list was the name of the city of ‘Iram.  The people of Elba had done business with the people of ‘Iram!

In conclusion I ask you to consider with care the following (Surah 29:50-51):

“And they say, ‘Why are not signs sent down to him from his Lord?’ Say, ‘Indeed, the signs are with Allah, and I am but a clear warner.’ But it is sufficient for them that We have sent down to you the Book [i.e., Quran] which is rehearsed to them? Verily, in that is mercy and a reminder to people who believe.”

Previous: The Amazing Quran (part 8 of 9)