Description: A series of articles compelling the reader to ponder over the marvels of the Quran.  Part 8: An objective approach to looking at the truthfulness of the Quran. 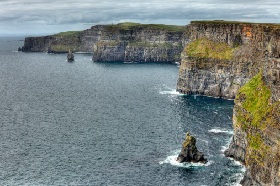 All of the examples so far given concerning the various angles from which one can approach the Quran have undoubtedly been subjective in nature; however, there does exist another angle, among others, which is objective and whose basis is mathematical.

It is surprising how authentic the Quran becomes when one assembles what might be referred to as a list of good guesses.  Mathematically, it can be explained using guessing and prediction examples.  For instance, if a person has two choices (i.e., one is right, and one is wrong), and he closes his eyes and makes a choice, then half of the time (i.e., one time out of two) he will be right.  Basically, he has a one in two chance, for he could pick the wrong choice, or he could pick the right choice.

Of course, the (only instance in which he could be totally right is the last scenario where he could guess correctly in both situations.  The odds of his guessing completely correctly have become greater because the number of situations for him to guess in have increased; and the mathematical equation representing such a scenario is ½ x ½ (i.e., one time out of two for the first situation multiplied by one time out of two for the second situation).

Continuing on with the example, if the same person now has three situations in which to make blind guesses, then he will only be right one-eighth of the time (i.e., one time out of eight or ½ x ½ x ½ ).  Again, the odds of choosing the correct choice in all three situations have decreased his chances of being completely correct to only one time in eight.  It must be understood that as the number of situations increase, the chances of being right decrease, for the two phenomena are inversely proportional.

Now applying this example to the situations in the Quran, if one draws up a list of all of the subjects about which the Quran has made correct statements, it becomes very clear that it is highly unlikely that they were all just correct blind guesses.  Indeed, the subjects discussed in the Quran are numerous, and thus the odds of someone just making lucky guesses about all of them become practically nil.  If there are a million ways for the Quran to be wrong, yet each time it is right, then it is unlikely that someone was guessing.

The following three examples of subjects about which the Quran has made correct statements collectively illustrate how the Quran continues to beat the odds.

In the 16th chapter (Surah an-Nahl 16:68-69) the Quran mentions that the female bee leaves its home to gather food.  Now, a person might guess on that, saying, “The bee that you see flying around - it could be male, or it could be female.  I think I will guess female.” Certainly, he has a one in two chance of being right.  So it happens that the Quran is right.  But it also happens that that was not what most people believed at the time when the Quran was revealed.  Can you tell the difference between a male and a female bee?  Well, it takes a specialist to do that, but it has been discovered that the male bee never leaves his home to gather food.  However, in Shakespeare’s play, Henry the Fourth, some of the characters discuss bees and mention that the bees are soldiers and have a king.  That is what people thought in Shakespeare’s time - that the bees that one sees flying around are male bees and that they go home and answer to a king.  However, that is not true at all.  The fact is that they are females, and they answer to a queen.  Yet it took modern scientific investigations in the last 300 years to discover that this is the case.

So, back to the list of good guesses, concerning the topic of bees, the Quran had a 50/50 chance of being right, and the odds were one in two.

In addition to the subject of bees, the Quran also discusses the sun and the manner in which it travels through space.  Again, a person can guess on that subject.  When the sun moves through space, there are two options: it can travel just as a stone would travel if one threw it, or it can move of its own accord.  The Quran states the latter - that it moves as a result of its own motion (Surah al-Anbiya 21:33).  To do such, the Quran uses a form of the word sabaha to describe the sun’s movement through space.  In order to properly provide the reader with a comprehensive understanding of the implications of this Arabic verb, the following example is given.

If a man is in water and the verb sabaha is applied in reference to his movement, it can be understood that he is swimming, moving of his own accord and not as a result of a direct force applied to him.  Thus when this verb is used in reference to the sun’s movement through space, it in no way implies that the sun is flying uncontrollably through space as a result of being hurled or the like.  It simply means that the sun is turning and rotating as it travels.  Now, this is what the Quran affirms, but was it an easy thing to discover?  Can any common man tell that the sun is turning?  Only in modern times was the equipment made available to project the image of the sun onto a tabletop so that one could look at it without being blinded.  And through this process it was discovered that not only are there spots on the sun but that these spots move once every 25 days.  This movement is referred to as the rotation of the sun around its axis and conclusively proves that, as the Quran stated 1400 years ago, the sun does, indeed, turn as it travels through space.

And returning once again to the subject of good guesses, the odds of guessing correctly about both subjects - the sex of bees and the movement of the sun - are one in four!