Description: One of the leading Islamic personalities in America, Jamaal Zarabozo, discusses the miracle of the Quran, as how it played an influence in his journey to Islam.  Part One: An Introduction to this topic, along with a brief description of the Quran and the Prophet Muhammad. 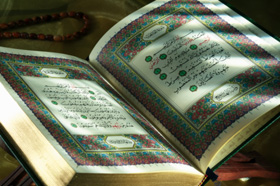 Let me state at the outset that, after being Muslim for many years now, if I were given the topic of “The Miraculous Quran,” as I see it now, I would be emphasizing and discussing aspects that were completely unknown to me at the time that I was studying Islam as a non-Muslim.  I have been studying the Quran for over thirty years now and it never fails to fascinate me.  In fact, the phenomenon of continually finding new fascinating aspects of the Quran has been true for the Muslim scholars throughout the years.  Over the centuries, as they have spoken about the Quran, later scholars recognize the miraculous aspects that the earlier scholars mentioned while coming across other aspects that they consider no less remarkable and amazing.  Thus, for example, in the past century, we have had Aishah bint al-Shaati, Sayyid Qutb and Mustafa Saadiq al-Raafi’ee all adding components to the overall theory of the miraculous nature of the Quran.[1]  Lately, many have emphasized what are called the “scientific miracles of the Quran,” a topic we shall try to visit toward the end of this lecture.

However, this lecture is about “my story” and my path to Islam via the Quran.  Therefore, I will be emphasizing those aspects of the Quran that influenced me the most at that time and I will give less time to other aspects that I have studied in detail since then.

A Very Brief Introduction to the Prophet Muhammad and the Quran

I am sure that most of you have some familiarity with the Prophet Muhammad, may the mercy and blessings of God be upon him, and the Quran but for some points that I will make later, I believe a very brief introduction to the two is in order.

Muhammad was born around 570 years after the birth of Jesus Christ.  He was born in Mecca, in the Arabian Peninsula.  The people of Mecca were devoted to idol-worship.  The area was not known as a place of advanced civilization or learning at its time.  In fact, the Prophet Muhammad was illiterate.  At the age of forty, Muhammad received his first revelation.  Although he was known among his people as “the trustworthy,” the majority of the Arabs belied him and soon after started a massive campaign to persecute those who believed in him.  After thirteen years of preaching in Mecca, the Prophet himself left for the city of Medina, where he already had some followers.  They made him the leader of the city.  The disbelievers of Mecca did not rest and attempted to militarily squash the new faith.  However, what was originally a small band of Muslims grew in number and were able to withstand the onslaught of the disbelievers.  Within ten years, the Prophet himself led an army back to Mecca and conquered it in a bloodless victory.  Thus, Islam became victorious in Arabia and began spreading throughout the world.  The Prophet Muhammad finally died in 632.

As for the Quran, it was revealed to the Prophet Muhammad over a period of twenty-three years.  It was revealed directly to him via the angel Gabriel.  He would receive the revelation and then convey it to his followers.  Thus, the Quran is very different from the Bible.  There are no human contributions to the Quran; it is only the revelation from God.  In other words, you will not find any stories about the Prophet written by his Companions in the Quran.  In fact, you will not even find in the Quran any of the Prophet’s speech outside of what he stated to be the revelation of the Quran.  The Prophet’s own words have been kept completely separate from the Quran.

One final note, the Quran is only in Arabic.  The best translation is not the Quran.  Once you lose something in its original wording and rely only on translation, the original is truly lost.

The Story of My Conversion and my Near Baptism

The story of my conversion is not the most fascinating.  However, one aspect is of interest: the affect that the Quran had on me.

My family moved to California from Spain.  Thus, we were nominally Catholic.  I had very little exposure to any religion until a friend of mine in school invited me to their church.  I started attending and this was the first time that I began to read the Bible.  I was definitely taking everything very seriously.  There then came the time to be baptized.  I had no problem with it except that I decided that, since this was the first religion I was exposed to, I should just look around at other religions to make sure that I was certain about what I was doing.  I did not think this would actually affect my final decision while, in reality, that near baptism led me to becoming a Muslim.

I started studying about all religions I could find.  This, obviously, is what led me to the Quran.

[1] For a discussion of these recent additions to the concept of the miraculous nature of the Quran, see Muhammad Rafii Yunus, “Modern Approaches to the Study of I’jaz al-Quran (Ph.D. Dissertation, University of Michigan, 1994), pp. 78-91 and 118-125.

Next: The Miraculous Quran (part 2 of 11): The Quran and Orientalists