Description: A series of articles compelling the reader to ponder over the marvels of the Quran.  Part 1: The experience of a merchant marine with the Quran, and the miracle in the mention of ‘something even smaller than an atom’ and honey. 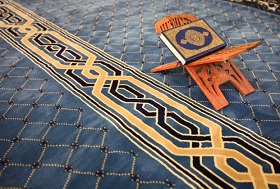 One thing which surprises non-Muslims who are examining the book very closely is that the Quran does not appear to them to be what they expected.  What they assume is that they have an old book which came fourteen centuries ago from the Arabian desert; and they expect that the book should look something like that - an old book from the desert.  And then they find out that it does not resemble what they expected at all.  Additionally, one of the first things that some people assume is that because it is an old book which comes from the desert, it should talk about the desert.  Well the Quran does talk about the desert - some of its imagery describes the desert; but it also talks about the sea - what it’s like to be in a storm on the sea.

Some years ago, the story came to us in Toronto about a man who was in the merchant marine and made his living on the sea.  A Muslim gave him a translation of the Quran to read.  The merchant marine knew nothing about the history of Islam but was interested in reading the Quran.  When he finished reading it, he brought it back to the Muslim and asked, “This Muhammad, was he a sailor?” He was impressed at how accurately the Quran describes a storm on a sea.  When he was told, “No as a matter of fact, Muhammad lived in the desert,” that was enough for him.  He embraced Islam on the spot.

…was not what someone imagining a storm on a sea to be like would have written; rather, it was written by someone who knew what a storm on the sea was like.  This is one example of how the Quran is not tied to certain place and time.  Certainly, the scientific ideas expressed in it also do not seem to originate from the desert fourteen centuries ago.

Many centuries before the onset of Muhammad’s prophethood, there was a well-known theory of atomism advanced by the Greek philosopher, Democritus.  He and the people who came after him assumed that matter consists of tiny, indestructible, indivisible particles called atoms.  The Arabs too, used to deal in the same concept; in fact, the Arabic word dharrah commonly referred to the smallest particle known to man.  Now, modern science has discovered that this smallest unit of matter (i.e., the atom, which has all of the same properties as its element) can be split into its component parts.  This is a new idea, a development of the last century; yet; interestingly enough, this information had already been documented in the Quran 34:3 which states:

“He [i.e., God] is aware of an atom’s weight in the heavens and on the earth and even anything smaller than that...”

Undoubtedly, fourteen centuries ago that statement would have looked unusual, even to an Arab.  For him, the dharrah was the smallest thing there was.  Indeed, this is proof, that the Quran is not outdated.

Another example of what one might expect to find in an “old book” that touches upon the subject of health or medicine is outdated remedies or cures.  Prophet, may the mercy and blessings of God be upon him, gave advice about health and hygiene, which are found in his Prophetic Traditions, and until today this advice is compelling and proven in the field of medicine.

asaalamu alaikum sisters and brothers, I am happy to know this site, the creator should be honored. I am feeling soooo proud and really really luckkkky to be a Muslim ! Allah helped me increase my Iman through this web... . Jazaak Allaahu Khair to all those related to this web.once again i am very glad that i saw and knew this site. if you know more about islam please tell me i am hype and ready to learn more.... thx again:D Jazaak Allaahu Khairan with faith, Fatimah