Description: By doing away with religion secularism has taken a dangerous path that has no end to moral degradation. 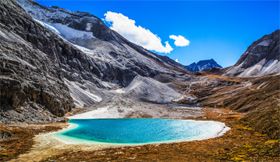 Moral values, such as honesty, trustworthiness, justice and chastity, are originally innate values which God planted in the hearts of mankind; then He sent His messengers with a system of life in accordance to this innate disposition to affirm it.

“So set your face toward the religion, as one by nature upright; the instinctive (religion) which God has created in mankind.  There is no altering (the laws) of God’s creation.  That is the right religion but most people do not know.” (Quran 30:30)

A believer adheres to these moral values because his nature, fortified by faith, induces him to do so, and because the religion he believes in commands him with them and promises him a reward for them in the Hereafter.  Secularism, on the other hand, even in its less virulent form that satisfies itself with removing religion from political life, rejecting it and the innate values as a basis for legislation, undermines the two foundations for moral values in the hearts of mankind.  As for secularism in its extreme atheistic form, it completely demolishes these two foundations and replaces them with human whims, either the whims of a few rulers in dictatorial systems or the whims of the majority in democratic systems.

“Have you seen the one who has taken his own desire as his god? Would you then be a guardian over him?” (Quran 25:43)

Since whims and desires are by their nature constantly changing, the values and behaviors based on them are also mutable.  What is considered today to be a crime, punishable by law with the severest of penalties, and causes its practitioners to be deprived of certain rights granted to others, becomes permissible tomorrow, or even praiseworthy, and the one who objects to it becomes “politically incorrect.” This shift from one point of view to its opposite, as a result of society’s estrangement from innate religious values, is a frequent occurrence.  However ignorant a traditional society may be, it, or many of its members, will maintain some innate values; but the further a society penetrates into secularism, the fewer such individuals will become, and the more marginal their influence will be, until the society collectively rebels against those same innate religious values it used to uphold.

There may be another reason for some traditional Jahili[1]  cultures to maintain innate religious values: they might appeal to their desires, or they represent their heritage and do not conflict with their desires.

“And when they are called to God and His Messenger to judge between them, Lo! a party of them refuse and turn away.  But if the right is with them they come to Him willingly.” (Quran 24:48-49)

Their relationship with truth is similar to Satan’s, as described by the Prophet,  may the mercy and blessings of God be upon him, to Abu Hurairah, whom Satan had advised to recite Ayat al-Kursi[2] when going to bed: “He told you the truth, even though he is an inveterate liar.”

Contemporary Western, secular societies are the clearest examples of the shifting, self-contradictory nature of jahili civilization.  From one angle it views culture and the values it rests upon as a relative, variable phenomenon.  However, from another angle it characterizes some values as human values, views their violation as shocking, and punishes their violators severely.  The sources of this problem are two fundamental principles which democratic secular societies rely upon.  The first is majority rule as a standard for right and wrong in speech and behavior; the second is the principle of individual freedom.  These two principles will necessarily conflict with each other if they are not subordinated to another principle that will judge between them.  Secularism, by its very nature, rejects religion, and in its Western form it does not consider fitrah (innate values) a criterion for what is beneficial or harmful for humanity.  It has no alternative but to make these two principles an absolute standard for what behavior is permissible and appropriate, and what isn’t.  The contradiction and conflict between these two principles is showing itself plainly in some of the current hot issues in these societies.  Those who advocate the acceptance of homosexuality and the granting to avowed homosexuals equal rights and opportunities in every aspect of life, including military service, base their argument on the principle of individual rights.  They see no one as having the right to concern themselves with what they call their “sexual orientation.” The same argument is made by supporters of abortion.  You frequently hear them say incredulously, “How can I be prohibited from freedom of choice in my own affairs and over my own body? What right do legal authorities have to involve themselves in such personal matters?” The only argument their opponents can muster is that this behavior contradicts the values held by the majority of the population.  Even though the basis for many people’s opposition to abortion is moral or religious, they can’t come out and say so openly, nor can they employ religious or moral arguments, since secular society finds neither of them acceptable.  If we accept that there is no basis for values except individual or majority opinion, and that it is therefore possible for all values to change from one era to another, and from one society to another, this means there is no connection between values and what will benefit or harm people in their material and spiritual lives, which in turn means that all values are equality valid and it doesn’t matter which values a given society accepts or rejects.  However, this means that all behavior considered abhorrent by secular societies today, such as sexual molestation of children and rape of women for which it has serious penalties, are considered repulsive only because of current inclination, which might change tomorrow, so certain serious crimes may become acceptable, based on the principle of individual freedom.  The reason a secularist is confused when posed with certain questions is that his repugnance toward such crimes is not really based on these two principles, which have become the only accepted bases for argument in societies dominated by secularism; the real reason for it is the remnants of the moral feelings he still possesses from the original nature with which God endowed him, and which linger on in spite of his secularism.  Perhaps the confusion of the secularist would increase if he were asked for what reason he had given such precedence to these democratic values, until he made them the standard by which all other values and behaviors are judged.  If he says his reverence for them is based merely on current personal preference and inclination, or on cultural chauvinism, he will have no reply to one who opposes him on the basis of his contradictory personal preferences, or because the norms of his society differ from those of the other.  The flimsy foundation of values in secular societies makes them liable to turn at any time against all the values they currently hold dear.  It also paves the way for them to descend to their practices of the occupation and colonization of weaker nations.  There is nothing to make them refrain from doing so, once one of them stands up and announces that there is a nationalist benefit to be gained by it and a large number of fellow citizens believe him.  His policy proposal becomes official policy, based on the standard of majority approval.  It is, however, as you can see, an approval based on nothing more than greed.  This has been the justification for every transgression in history.  In fact it is the basis on which any animal attacks another.  Personal freedom and majority rule are not, then, the fundamental values on which secular culture is based.  That is because freedom entails choice, but it is not the criterion for that choice.  I mean that whoever is given the freedom to choose needs a standard that he can use as the criterion for his choice.  Likewise, majority opinion is not itself the standard; it is merely the result of many individual choices made on the basis of some standard.  So what is the basis for the choices of a free individual and a free society in the secular system? It is, without the slightest doubt, those whims and desires which have taken the place of the real Deity.

[1]  It is a combination of views, ideas, and practices that defy and reject the guidance sent down by God through His Prophets.