A Glimpse of Muslim Spain

Description: With the arrival of the Muslims in Spain, the once arid and illiterate land became the capital of European scholarship and agriculture, where people of all faiths were granted security under Muslim rule. 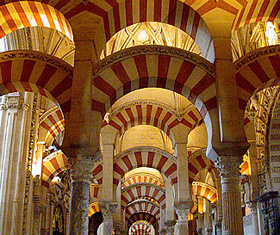 When you think of European culture, one of the first things that may come to your mind is the renaissance.  Many of the roots of European culture can be traced back to that glorious time of art, science, commerce and architecture.  But did you know that long before the renaissance there was a place of humanistic beauty in Muslim Spain?  Not only was it artistic, scientific and commercial, but it also exhibited incredible tolerance, imagination and poetry.  Muslims, as the Spaniards call the Muslims, populated Spain for nearly 700 years.  As you’ll see, it was their civilization that enlightened Europe and brought it out of the dark ages to usher in the renaissance.  Many of their cultural and intellectual influences still live with us today.

Way back during the eighth century, Europe was still knee-deep in the Medieval period.  That’s not the only thing they were knee-deep in.  In his book, “The Day The Universe Changed,” the historian James Burke describes how the typical European townspeople lived:

“The inhabitants threw all their refuse into the drains in the center of the narrow streets.  The stench must have been overwhelming, though it appears to have gone virtually unnoticed.  Mixed with excrement and urine would be the soiled reeds and straw used to cover the dirt floors. (p. 32)

This squalid society was organized under a feudal system and had little that would resemble a commercial economy.  Along with other restrictions, the Catholic Church forbade the lending of money - which didn’t help get things booming much.  “Anti-Semitism, previously rare, began to increase.  Money lending, which was forbidden by the Church, was permitted under Jewish law.” (Burke, 1985, p.  32) Jews worked to develop a currency although they were heavily persecuted for it.  Medieval Europe was a miserable lot, which ran high in illiteracy, superstition, barbarism and filth.

During this same time, Muslims entered Europe from the South.  Abd al-Rahman I, a survivor of a family of caliphs of the Muslim empire, reached Spain in the mid-700’s.  He became the first Caliph of Al-Andalus, the Muslim part of Spain, which occupied most of the Iberian Peninsula.  He also set up the Umayyad Dynasty that ruled Al-Andalus for over three-hundred years.  (Grolier, History of Spain).  Al Andalus means, “the land of the vandals,” from which comes the modern name Andalusia.

At first, the land resembled the rest of Europe in all its squalor.  But within two-hundred years the Muslims had turned Al-Andalus into a bastion of culture, commerce and beauty.

By the beginning of the ninth century, Muslim Spain was the gem of Europe with its capital city, Cordova.  With the establishment of Abd al-Rahman III - “the great caliphate of Cordova” - came the golden age of Al-Andalus.  Cordova, in southern Spain, was the intellectual center of Europe.

“The houses had marble balconies for summer and hot-air ducts under the mosaic floors for the winter.  They were adorned with gardens with artificial fountains and orchards”.  (Digest, 1973, p. 622) “Paper, a material still unknown to the west, was everywhere.  There were bookshops and more than seventy libraries.” (Burke, 1985, p. 38).

In his book titled, “Spain In The Modern World,” James Cleuge explains the significance of Cordova in Medieval Europe:

“For there was nothing like it, at that epoch, in the rest of Europe.  The best minds in that continent looked to Spain for everything which most clearly differentiates a human being from a tiger.” (Cleugh, 1953, p. 70)

During the end of the first millennium, Cordova was the intellectual well from which European humanity came to drink.  Students from France and England traveled there to sit at the feet of Muslim, Christian and Jewish scholars, to learn philosophy, science and medicine (Digest, 1973, p. 622).  In the great library of Cordova alone, there were some 600,000 manuscripts (Burke, 1978, p. 122).

This rich and sophisticated society took a tolerant view towards other faiths.  Tolerance was unheard of in the rest of Europe.  But in Muslim Spain, “thousands of Jews and Christians lived in peace and harmony with their Muslim overlords.” (Burke, 1985, p. 38)

Unfortunately, this period of intellectual and economic prosperity began to decline.  Shifting away from the rule of law, there began to be internal rifts in the Muslim power structure.  The Muslim harmony began to break up into warring factions.  Finally, the caliphs were eliminated and Cordova fell to other Muslim forces.  “In 1013 the great library in Cordova was destroyed.  True to their Islamic traditions however, the new rulers permitted the books to be dispersed, together with the Cordovan scholars to the capital towns of small emirates.” (Burke, 1985, p. 40) The intellectual properties of the once great Al-Andalus were divided among small towns.

…the Christians to the North were doing just the opposite.  In Northern Spain the various Christian kingdoms united to expel the Muslims from the European continent.  (Grolier, History of Spain) This set the stage for the final act of the Medieval period.

In another of James Burke’s works titled “Connections,” he describes how the Muslims thawed out Europe from the Dark Ages.  “But the event that must have done more for the intellectual and scientific revival of Europe was the fall of Toledo in Spain to the Christians, in 1105.”  In Toledo the Muslims had huge libraries containing the lost (to Christian Europe) works of the Greeks and Romans along with Muslim philosophy and mathematics.  “The Spanish libraries were opened, revealing a store of classics and Muslim works that staggered Christian Europeans.” (Burke, 1978, p. 123)

The intellectual plunder of Toledo brought the scholars of northern Europe like moths to a candle.  The Christians set up a giant translating program in Toledo.  Using the Jews as interpreters, they translated the Muslim books into Latin.  These books included “most of the major works of Greek science and philosophy...  along with many original Muslim works of scholarship.” (Digest, p. 622)

“The intellectual community which the northern scholars found in Spain was so far superior to what they had at home that it left a lasting jealousy of Muslim culture, which was to color Western opinions for centuries” (Burke, 1985, p. 41)

These works alone however, didn’t kindle the fire that would lead to the renaissance.  They added to Europe’s knowledge, but much of it was unappreciated without a change in the way Europeans viewed the world.

Remember, Medieval Europe was superstitious and irrational.  “What caused the intellectual bombshell to explode, however, was the philosophy that came with (the books).” (Burke, 1985, p. 42)

Christians continued to re-conquer Spain, leaving a wake of death and destruction in their path.  The books were spared, but Moor culture was destroyed and their civilization disintegrated.  Ironically, it wasn’t just the strength of the Christians that defeated the Muslims but the disharmony among the Muslims’ own ranks.  Like Greece and Rome that proceeded them, the Muslims of Al-Andalus fell into moral decay[1]  and wandered from the intellect that had made them great.

The translations continued as each Muslim haven fell to the Christians.  In 1492, the same year Columbus discovered the New World, Granada, the last Muslim enclave, was taken.  Captors of the knowledge were not keepers of its wisdom.  Sadly, all Jews and Muslims that would not abandon their beliefs were either killed or exiled (Grolier, History of Spain).  Thus ended an epoch of tolerance and all that would remain of the Muslims would be their books.

It’s fascinating to realize just how much Europe learned from the Muslim texts and even greater to see how much that knowledge has endured.  Because of the flood of knowledge, the first Universities started to appear.  College and University degrees were developed (Burke, 1985, p. 48).  Directly from the Muslims came the numerals we use today.  Even the concept of Zero (a Muslim word) came from the translations (Castillo & Bond, 1987, p. 27).  It’s also fair to say that renaissance architectural concepts came from the Muslim libraries.  Mathematics and architecture explained in the Muslim texts along with Muslim works on optics led to the perspective paintings of the renaissance period (Burke, 1985 p. 72).  The first lawyers began their craft using the new translated knowledge as their guide.  Even the food utensils we use today come from the Cordova kitchen! (Burke, 1985 p. 44) All of these examples show just some of the ways Europe transformed from the Muslims.

[1] By leaving the tenets of their religion – IslamReligion.