A Brief History of Islam (part 5 of 5): The Caliphate of Uthman ibn Affan

Description: The election, governance, and character of the third Caliph of Islam. 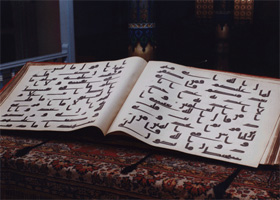 Umar ibn Al-Khattab, the second caliph of Islam, was stabbed by a Persian slave Abu Lu’lu’ah, a Persian Magian, while leading the Fajr Prayer.  As Umar was lying on his death bed, the people around him asked him to appoint a successor.  Umar appointed a committee of six people to choose the next caliph from among themselves.

This committee comprised Ali ibn Abi Talib, Uthman ibn Affan, Abdur-Rahman ibn Awf, Sad ibn Abi Waqqas, Az-Zubayr ibn Al-Awam, and Talhah ibn Ubayd Allah, who were among the most eminent Companions of the Prophet, may God send His praises upon him, and who had received in their lifetime the tidings of Paradise.

The instructions of Umar were that the Election Committee should choose the successor within three days, and he should assume office on the fourth day.  As two days passed by without a decision, the members felt anxious that the time was running out fast, and still no solution to the problem appeared to be in sight.  Abdur-Rahman ibn Awf offered to forgo his own claim if others agreed to abide by his decision.  All agreed to let Abdur-Rahman choose the new caliph.  He interviewed each nominee and went about Medinah asking the people for their choice.  He finally selected Uthman as the new caliph, as the majority of the people chose him.

His Life as a Caliph

Uthman led a simple life even after becoming the leader of the Islamic state.  It would have been easy for a successful businessman such as him to lead a luxurious life, but he never aimed at leading such in this world.  His only aim was to taste the pleasure of the hereafter, as he knew that this world is a test and temporary.  Uthman’s generosity continued after he became caliph.

The caliphs were paid for their services from the treasury, but Uthman never took any salary for his service to Islam.  Not only this, he also developed a custom to free slaves every Friday, look after widows and orphans, and give unlimited charity.  His patience and endurance were among the characteristics that made him a successful leader.

Uthman achieved much during his reign.  He pushed forward with the pacification of Persia, continued to defend the Muslim state against the Byzantines, added what is now Libya to the empire, and subjugated most of Armenia.  Uthman also, through his cousin Mu'awiyah ibn Abi Sufyan, the governor of Syria, established an Arab navy which fought a series of important engagements with the Byzantines.

Of much greater importance to Islam, however, was Uthman's compilation of the text of the Quran as revealed to the Prophet.  Realizing that the original message from God might be inadvertently distorted by textual variants, he appointed a committee to collect the canonical verses and destroy the variant recensions.  The result was the text that is accepted to this day throughout the Muslim world.

Opposition and the End

During his caliphate, Uthman faced much of hostility from new, nominal Muslims in newly Islamic lands, who started to accuse him of not following the example Prophet and the preceding caliphs in matters concerning governance .  However, the Companions of the Prophet always defended him.  These accusations never changed him.  He remained persistent to be a merciful governor.  Even during the time when his foes attacked him, he did not use the treasury funds to shield his house or himself.  As envisaged by Prophet Muhammad, Uthman’s enemies relentlessly made his governing difficult by constantly opposing and accusing him.  His opponents finally plotted against him, surrounded his house, and encouraged people to kill him.

Many of his advisors asked him to stop the assault but he did not, until he was killed while reciting the Quran exactly as the Prophet had predicted.  Uthman died as a martyr.

“The Prophet once climbed the mountain of Uhud with Abu Bakr, Umar, and Uthman.  The mountain shook with them.  The Prophet said (to the mountain), ‘Be firm, O Uhud! For on you there is a Prophet, an early truthful supporter of mine, and two martyrs.’” (Saheeh al-Bukhari)

Previous: A Brief History of Islam (part 4 of 5): The Caliphate of Abu Bakr and Umar

keep up the good work. may Allah have mercy on your souls!

Allah is one... and Muhammad (s.a.s) is our messenger the best of creation. I love him... and my mind goes to him I feel happy of him, and I always pray to be like him may Allah give Muslims the best knowledge to worship jallawala like the companions of rasullullah... (S.A.S).

"No matter how big ur problem is,always stay strong,have faith in Allah."