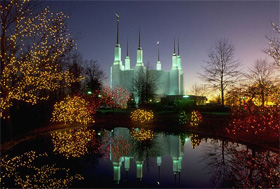 The Church of Latter-day Saints, better known as the Mormon Church has a list of basic doctrines known as the 13 articles of Faith.  Written by Joseph Smith in 1842 the articles cover the essential elements of what Mormons believe.  At first glimpse they appear innocuous and typical of any Christian church.  However they do leave out some important beliefs that make the Mormon Church unique and explain the reason why many mainstream Christians believe that Mormonism is not a Christian denomination.  For instance they do not describe the concept of eternal families or baptism of the dead.  Nor do they mention some of the rather odd practices and beliefs such as wearing special protective underwear and unusual secret ceremonies.

In the previous article we examined the extraordinary claim that both God and Jesus were once mortal men who played distinct roles in the creation of earth and the creation of humankind.  They are the first two parts of a trinity that includes the Holy Ghost (spirit).  Muslims find the notion that God was once a human being as offensive.  The fundamental doctrine of Islam is that God is One, unique, incomparable and is unlike His creation.  Likewise most Christians also find the concept of God as a mortal human being astonishing, even though they have no trouble accepting Jesus as being both mortal and divine at the same time.

Mormons and Muslims both share the belief that the doctrine of original sin does not exist, thus both believe that people are not punished for the sins or mistakes made by Adam and Eve, and their children are not accountable to God for their actions until they have reached the  age of accountability.  In Mormonism this is around the age of 8 years and in Islam it is at the age of puberty.  This is where the similarities end.  Punishment in Mormonism is not being able to dwell with God in the third heaven; it does not involve Hell because Mormons do not believe that hell exists, whereas the existence of hell is one of the pillars of belief in Islam.  Christian denominations usually have some concept of Hell or a place of eternal punishment.

Mormons believe in Baptism by immersion in water and the laying on of hands, by which a person receives the Holy Spirit.  These rites are essential and without them a person will not be "saved".  Mormon children are baptised at age 8.  In Christianity, baptism is performed usually on babies primarily to remove the stain of original sin.  Some Christian denominations use full immersion in water while others use the water symbolically.   Islam has no such rite believing instead that all people are born Muslim, i.e.  born already knowing and submitting to God.  At age 12, Mormon children are able to go to the temple and do baptisms for the dead, a process unique to the Mormon Church.  Mormon’s after extensive genealogy research go to the temples with lists of the dead to be baptised on their behalf.

Article 9 of the Mormon faith states, "We believe all that God has revealed, all that He does now reveal, and we believe that He will yet reveal many great and important things pertaining to the Kingdom of God." This basically means that God is continuing his revelations through the continuous line of Mormon prophets.  All supreme leaders of The Church of Latter-day Saints are prophets, beginning with Joseph Smith, his successor Brigham Young and so on down through the generations.  The last time a Mormon prophet publicized revelation from God was in 1978 when black people were granted the ability to hold office in the Mormon Church.   In most Christian denominations the line of Prophets from God stops at Jesus Christ, although there have been a number of people claiming to be prophets.  In Islam the final prophet is recognised as Prophet Muhammad, may the mercy and blessings of God be upon him, who is also the only prophet to bring revelation from God after Jesus Christ.  One of the tenets of Islam states that Muhammad is the final prophet.

Many Mormons wear what is often mockingly referred to as a special or magic under wear.  This is a practice completely unknown to the followers of Christianity and Islam although it could be equated with the habit of using items of clothing as a good luck charm.  Muslims categorically believe that there is no power or strength except from God Alone and they do not carry or wear talismans or charms of any kind.  Christians however are not prevented by their religion from using or wearing a good luck talisman or charm.

In the Mormon Church the special underwear is known as a "garment" and according to the website dedicated to the temples of LDS, they are a symbolic gesture of the promises a Mormon makes to God.  The garment is always worn under other clothing, next to the skin usually taking the place of regular underwear.  Mormons begin wearing it during their first visit to the temple when they undergo a sacred ceremony called the temple endowment.  During this ritual, additional special clothing is put on but the "garment" is worn at all times, both day and night, from then on.  "It serves as a constant reminder of the covenants made during the temple endowment."[1]

Mormon churches are dedicated public places of worship where Mormons and visitors can meet to pray, study scripture, partake of the sacrament, and continue to learn their responsibilities as children of God.  The temples however are dedicated place where sacred ordinances needed for eternal life are performed.  Because of its sacred nature, attendance in the temples is limited to Mormons who obey God's commandments and therefore are the only ones worthy to enter.

Endowment ceremonies are administrated to Mormons in the temple.  Apparently these are sacred ordinances and promises that make a person eligible for the highest heaven, and those Mormons considered worthy willingly partake in them during a visit to the temple.  The endowments are considered vital to a person’s placement in the hereafter but can only be performed on earth.  They are to a large degree secret; however in recent years many people dissatisfied with the church have left and revealed many aspects of the rituals.  The ceremonies can last as long as five hours and can include ritual washing and anointing of the entire body and the receiving of a new name.

Needless to say such ceremonies do not exist in Christianity or Islam, however former members of the Mormon Church have pointed out the similarity of the secret rituals and Masonic rituals.

Mormonism contains many beliefs and actions that put it outside the fold of what could be termed normal Christian denominations.  So much so that many Christian leaders have condemned the church as an unchristian cult.  For a Muslim, Mormonism contains so many elements of the sin of ascribing partners to God Himself and other odd practices that there is barely any common ground between the two religions.

Previous: Mormonism (part 1 of 2): Who are the Mormons?