Description: A brief introduction that explains Mormons and their beliefs.

Mormonism - the doctrines and practices of the Mormon Church based on the Book of Mormon.[1] 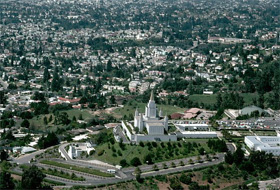 Mormons are members of the Church of Jesus Christ of Latter-day Saints.  The name Latter-day comes from  the belief that after the death of the early apostles, the Christian church fell into apostasy  and needed to be restored in the “latter days”.[2]

The Church of Latter-day Saints (LDS) was established in 1830 and since that time it has grown from a small congregation to a worldwide religion of over 14 million adherents.  Although the centre of the church is in the American state of Utah, only 14% of Mormons live there.  The Church has nearly 30,000 congregations in more than 130 temples across the globe.  It prints monthly magazines in 50 languages, and has published more than 100 million copies of the Book of Mormon in over 93 languages.  Currently (2012), LDS has more than 50,000 missionaries in 162 countries.[3]

At the most basic level Mormonism shares most Judeo-Christian beliefs; the creation of the world, the stories of Adam and Eve, the flood and the prophets.  However they do take a slightly different approach to some of these stories.  For example, Mormon’s believe that the archangel Michael was born on earth as Adam, the first mortal man.  In the Mormon version of the creation story, Jesus Christ, who before his birth was the Jehovah of the Hebrew Bible, created the earth and all things on it at the direction of God the Father.  This is a notion very similar to the beliefs of the Jehovah’s Witnesses.[4]

The Mormon understanding of God is quite distinct from what most Christian denominations believe and it goes without saying that it is very different from both Judaism and Islam.  Mormons believe that God is immortal and that He was once a man albeit a perfect and exalted man.  God is not of another species, nor is he the great unknowable one; he is indeed our Father in heaven.  God according to the Church of Latter-day Saints is literally the father of every human being.  He has a body, and emotions like all human beings.  To Muslims and Christians alike this sounds blasphemous and contributes to the reasons why most Christian denominations do not consider Mormons to be Christians.  In fact in both the Catholic and Methodist denominations Mormons who convert are required to be baptised into the Christian faith, which is not usually the case when Christians leave one Christian denomination for another.

A Mormon belief that strikes at the very heart of anyone practising one of the Abrahamic faiths (Judaism, Christianity and Islam) is the insistence that Jesus is the Son of God in the most literal sense.  He is the eldest brother of all mortals and the firstborn spirit child of God.  They believe that from Mary, a mortal woman, Jesus inherited the capacity to die, and from God, an exalted being, he inherited the capacity to live forever.[5]

Consequently and based on what most Christians believe, the Mormon version of the Trinity is somewhat unusual.  According to Mormons, the Trinity is a Godhead that consists of three separate, distinct beings, God the Father, also called Elohim, Jesus Christ, who is also the Jehovah of the Old Testament and the Holy Ghost.  Mormons also believe that there is more than one God and that human beings have the potential to become gods.

Like a pendulum Mormon beliefs swing between what is accepted by mainstream Christian churches and their own peculiar mix of Christianity and visionary stories.  According to research scientist and former Mormon Bishop, Simon G.  Southerton[6], The Book of Mormon is based on the concept that Meso-America was an uninhabited land peopled by Jews who floated across the ocean in a boat that resembled two large dishes fastened together to form a hollow.  Needless to say there is no historical or archaeological evidence to support this theory.

Nonetheless Mormons believe that the resurrected Jesus ministered to these people, called the Nephites.  He appeared before a congregation in their temple, and allowed them to feel the wounds in his hands and feet.  He stayed with them for several days, teaching and healing and ordained twelve disciples.  He gave the people various commandments and presented them with the gift of the Holy Ghost.

Mormons earnestly believe that Jesus Christ began his restoration of his church on earth through the Prophet Joseph Smith in 1820.  Joseph began having visions of restoring the church at age 14, and claimed to have the same teachings and basic organization as the Church established by Jesus in New Testament times.  According to an LDS official website[7], “In 1823 Joseph Smith was visited by a heavenly messenger named Moroni just as angels often appeared to Apostles in the New Testament.  Moroni told Joseph about a record of the ancient inhabitants of the American continent (the Nephites) that was buried in a nearby hill and was written on thin metal sheets of gold.”  Joseph found the plates near his home in Palmyra, New York.  With heavenly inspiration, because Joseph did not understand the “reformed Egyptian” language written on the plates, he translated the book into English.  The book was named the Book of Mormon after the ancient prophet who compiled it.

Along with the Book of Mormon, Mormons believe the Bible is sacred and like Muslims they believe that the words of God found in the Bible are a mixture of truth and error because many have been changed, or forgotten.  However the Mormon version is in no way acceptable to Islam.  The Mormon sacred scripture also includes a book called The Pearl of Great Price, which includes two lost books of the Bible, a translation of the Gospel of Matthew, and the 13 Articles of Faith; and The Doctrine and Covenants, a group of 138 revelations from God and two other official documents.

In the next article we will continue to explore the differences between Mormonism, mainstream Christianity and Islam.