Description: A brief look at the origin of Shinto, its role in Japanese culture, and the spirit beings known as Kami.

According to the Princeton online dictionary Shintoism is the ancient indigenous religion of Japan. It lacks a formal dogma and is characterised by the veneration of nature spirits and ancestors.[1]

The name Shinto comes from Chinese characters for Shen ('divine being'), and Tao ('way') and means 'Way of the Spirits'.[2] 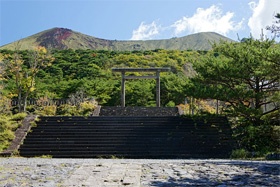 It is extremely difficult to estimate the number of Shinto adherents throughout the world. Some sources give numbers in the range of 2.8 to 3.2 million. Others state that 40% of Japanese adults follow Shinto; if that was the case there would be about 50 million adherents. Yet other sources assert that about 86% of Japanese adults follow a combination of Shinto and Buddhism, which would put the number of adherents to Shinto at 107 million.[3]

Shintoism is concerned with ritual rather than dogma; thus the Japanese people do not consider it as a religion, rather it is considered an aspect of Japanese life. It is for this reason Shintoism has existed easily with Buddhism for centuries. There are no missionary efforts in Shinto, it is rarely practised outside Japan and there is no book or guide. Shinto and its rituals are handed down from generation to generation.

There is also no sacred scripture in Shintoism, but there are books of Japanese mythology and folklore, the Kojiki or ‘Records of Ancient Matters’ (712 CE) and the Nihon-gi or ‘Chronicles of Japan’ (720 CE).[4] According to the Kojiki, gods are believed to have created Japan as their image of paradise on earth, and the ruler of Japan, the Emperor, is a direct descendent of the Sun-goddess Amaterasu. The Japanese concept of the divinity of the Emperor is often misunderstood by those outside Japan. Neither the Emperor nor most of his people ever thought that the Emperor was a God in the sense of being a supernatural supreme being. However, the myths have in the past led some Japanese people believing that Japan and its people are special and more worthy of protection than those of different ethnicities.

Shintoism began around 500 BCE and was originally "an amorphous mix of nature worship, fertility cults, divination techniques, hero worship, and shamanism."[5]  It is polytheistic, whereby adherents venerate natural objects believed to contain spirit beings; these include mountains, rivers, water, rocks, and trees. Ancestors are also revered and worshipped. Shinto’s morality and ethics are based upon what is of the most benefit to the entire community.[6] "Shinto emphasizes right practice, sensibility, and attitude." All human life and human nature is sacred.

The essence of Shinto however is devotion to the invisible spirit beings that are called Kami. They are not God or gods but spirits concerned with the Japanese people. If they are treated properly with ritual devotion they will intervene in people’s lives with many benefits such as health and success. Most Kami do not have names but are referred to as the Kami of such and such a place. There are however three types of Kami that are of particular importance.  The first of these are the Ujigami, the ancestors; humans become Kami after they die and are revered by their families as ancestral Kami.[7] The second type are the Kami of natural objects and the forces of nature and the third type are the souls of particularly righteous dead people. All humankind are regarded as Kami’s children, thus believers revere "musuhi", the Kami’s creative and harmonizing powers, and they aspire to have makoto or sincerity.[8] However not all Kami are good, some apparently can be downright evil.

The early texts briefly talk about the “plain of heaven” and a “dark land”, the unclean land of the dead, but make very little mention of an afterlife because Shinto is wholly devoted to life in this world and emphasises humankind’s essential goodness. Apparently evil Kami enter the world from the outside and effect humankind with such things as disease, and decay. When people act wrongly, they allow pollution and evil into the world and obstruct the flow of good energy. Consequently, the purpose of most Shinto rituals is to keep away evil spirits by purification, prayers and offerings to the Kami.

The introduction of Buddhism to Japan in the sixth century CE did not cause the abandonment of Shinto. Instead, both religions were expanded and Buddhist figures adopted complementary Shinto identities. Thus new converts to Buddhism were not obliged to abandon their traditional beliefs. In Japan Shinto places of worships are referred to as shrines while Buddhist places are called temples.  The Kami live in the shrines and every village, town or district has its own Shinto shrine. It is rare for shrines to contain statues, however if statues do exist they are not worshipped rather they represent certain animals, like the fox or horse, that serve the Kami. Shinto worship is highly ritualised, and can take place in the shrines or in homes.

Many Japanese homes contain a place set aside as a shrine, called a Kami-dana. It is here that offerings of flowers or food are made, and prayers are said. The Kami-dana is a shelf that usually contains a tiny replica of the local shrine. It may also include amulets to ensure good luck or absorb bad luck and a mirror that connects the shelf to the Kami.

Shintoism pervades Japanese life at all levels. Japanese culture includes Shinto architecture and ancient art forms such as Noh theatre, Japanese calligraphy and gagaku. It also includes ancient dance music that originated in the courts of Tang China (618 - 907). Throughout Japan a large number of wedding ceremonies are held in Shinto style. Death, however, is considered a source of impurity, and thus there are virtually no Shinto cemeteries, and most funerals are held in Buddhist style.[9]

In part two we will compare the Kami with the spirit beings of Islam, the jinn. We will look closely at festivals and rituals and discuss the fact that the followers of Shintoism are shackled to  the ritual superstition that is often associated with polytheistic religions.

Next: Shinto (part 2 of 2): An example of Polytheism