What is Taoism? (part 2 of 2): Common virtues do not make a religious connection

Description: A brief comparison between the beliefs of Taoism and Islam. 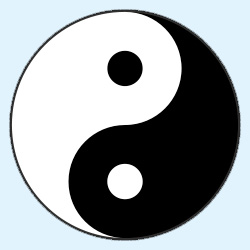 Compassion, moderation and humility; these are the three jewels or attributes that Taoists live by in order to live a good and worthwhile life.  They are the same moral characteristics valued by Muslims.  The first of the three jewels (sometimes known as treasures) is ci, literally compassion, tenderness, love, mercy, kindness, gentleness, or  benevolence.   It is also a Classical Chinese term for mother.  The second is jian, literally moderation, economy, restraint, to be sparing.  The third treasure is a six-character Chinese phrase instead of a single word; Bugan wei tianxia xian.  It translates as humility but it really means more than that; according to Taoist wisdom it is the way to avoid premature death.   To be at the world's front is to expose oneself, to render oneself vulnerable to the world's destructive forces, while to remain behind and to be humble is to allow oneself time to fully ripen and bear fruit.

Let us see how this compares with the same virtues taught in Islam.  The most important thing to note is that compassion is number one and that it is a word linked with the classical Chinese word for mother.  We know that in Islam God is known as the Most Merciful.   The dictionary defines mercy as disposition to be kind and forgiving, and the feeling that motivates compassion.  The Arabic term for mercy is rahmah and the Arabic word for womb, raheem, is derived from the same root word.  It is significant that there is a unique connection between God’s mercy and the womb.  God nurtures and shelters us, just as the womb nurtures and shelters the unborn child.  The connection between mercy, compassion and motherhood are obvious in both the Islamic term rahmah and the Taoist jewel, compassion.

What about moderation?  It is clearly an important virtue in Taoism, but what about in Islam?   In accordance with Islam’s holistic approach to life, everything must be done in moderation.   There is no reason or excuse for extreme or fanatical behaviour.  The Quran refers to those who truly follow Islam as the community of the middle-path.

The third jewel, humility is also a virtue highly praised in Islam.   However Islam stresses that humility is a trait that will lead us to a blissful life ever after while Taoism seems to place great emphasis on humility in this life in order to live a full and worthwhile life.  Ibadah is the Arabic word for worship, however the root of the word ubudiyyah means to express one’s humility or humbleness.  It is the complete sense of humbleness that overcomes one who is totally submitted to the will of God, the Almighty.   Worship is submission to God, and the essential part of submission is humility.  Thus we are able to see that the essential virtues of Taoism and Islam are virtually the same.  This is not surprising because most religions emphasise the necessity of high moral standards and virtuous behaviour.

Places for Taoist activities are called Taoist palaces (gong) or temples (guan).  Taoists originally preferred to build their temples in serene mountains and forests, but as it spread more and more temples were built in urban areas.  Each of them came to enshrine a great number of statues of deities and immortals.  This leads us into asking an essential question, what exactly does Taoism say about the basis of Islamic belief, the oneness of God? How does Taoism view God?  There is some concept of God in the religion of Taoism however as we learned in part 1, although Taoists accept the necessity of a supreme being they believe it to be  beyond human understanding.

Consequently Taoism does accept the concept of God.  However, according to A Personal Tao, “This question is irrelevant.  God could or could not exist, and either state doesn’t change the way we lead our lives.  Our lives are expressions of action between ourselves and the universe.  To respect our surrounding environment is a furthering of respect to ourselves.  This manner of living doesn’t change regardless of the nature of God or the Tao”.[1]  In part 1 we lightly touched on the fact that Taoism was able to embrace the other philosophies and religions existing in China because it is possible to practice Taoism at the same time as other religions.  Many Chinese Buddhists are also Taoists.  However this has led to a unique polytheism in Taoism that did not exist when it was first practiced.

Idolatry and polytheism have no place in Islam, nor do Muslims believe that it is possible to practice more than one religion at a time.  Although there are commonalities especially in the area of virtuous behaviour these do not connect the two religions in anyway.   Muslims believe in One, Unique, incomparable God, Who alone is the Almighty, the Creator, the Sovereign, and the Sustainer of everything in the whole universe.   He alone is to be worshipped, supplicated to, and shown all acts of worship.  He stands in need of none of His creation; rather it is they who depend on Him for all that they need.   Islam gives a clear purpose of life and has given laws that lead a person to a successful and content life in this world and eternal bliss in the Hereafter.

[1] A Personal Tao By Casey Kochmer

Previous: What is Taoism? (part 1 of 2): An Introduction