Description: The what, where, when, and why of Taoism. 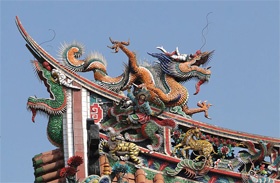 Taoism is an ancient Chinese tradition of philosophy and religious belief also referred to as Daoism which is said to be a more accurate way of saying the Chinese word in English.  The Tao (in Taoism) is usually translated as ‘the way’.   It is very difficult to estimate the number of Taoists in the world, especially in mainland China where religion was outlawed under the strict communist rule.  However estimates have ranged from 30 million to 300 million in China alone.  It is believed that there are more than 30 million Taoists in Taiwan, Macau, and Hong Kong and smaller populations scattered through Vietnam, Korea, Laos and Thailand.  The USA and the United Kingdom are thought to have Taoist populations of about 30,000 each.  Although this is a relatively little known religion outside Asia its adherents make up quite a significant proportion of the 21st century world population.

Although we may know very little about the philosophy and religious beliefs of Taoism it is unlikely that we have not been influenced by one or more Taoist practice.  It is the philosophy /religion responsible for acupuncture, feng shui, the popular yin and yang symbol, Zen, and the martial art Tai Chi.  Taoism’s influence can also be seen in the very fashionable Chinese herbal medicine and the practice of meditation.

The origin of Taoism is obscure.  The early teachings are usually ascribed to Lao Tzu who, in the  fifth century BCE wrote the influential Taoist text, the Dao De Jing (The Way and its Power).  While the only other popular Chinese philosophy at the time, Confucianism, stressed ethical action, Taoism encouraged the virtue of Wu Wei (non-action), or going with the flow.  The power of emptiness, detachment, receptiveness, spontaneity, the strength of softness, the relativism of human values and the search for a long life are other Taoist themes.  The proficient Taoist was at that time concerned with achieving immortality, and this led to the development of alchemy and the methods of meditation.

Taoism provided an alternative to the Confucian tradition in China and the two traditions have coexisted easily sometimes within the same individual.  However, as the centuries past Taoism did find itself in direct competition with Buddhism.  In order to survive Taoism incorporated Buddhist practices and ancient Chinese folklore to create a religious dimension to go with the philosophical precepts of the early teachers.   The original, more philosophical Taoism has inspired Chinese painters and poets through the ages.

According to Taoists, Tao is the absolute principle underlying the universe, it combines within itself the principles of yin and yang and it signifies the way or the code of behaviour.  The power of the Way is referred to as Te.  Tao, they say, flows through all life and a believer strives to harmonise with this force.  As far as Taoists are concerned the Supreme Being or ultimate truth is beyond words or conceptual understanding.  This is similar to other religions ideas about God, however Taoists seldom refer to or use the word God.  However, Traditional Taoism did not believe in the existence of a Creator.  It was non-theistic, and Lao Tzu’s teachings never gave the impression that the Tao or (Way) could in any circumstance be regarded as God.

Taoists do not recognise the theme of good against evil; rather they see the interdependence of all dualities, thus the yin and yang concept of opposites.  Any action has some negative (yin) and some positive (yang) aspect to it.  Thus when one labels something as good, one automatically creates evil.[1]  Taoists also do not accept the duality of salvation vs.  damnation.   There is no concept of heaven or hell; the ultimate goal is to return to the Tao – the universal life force.  Living simply in harmony with Tao, and not excessively pursuing material wealth, stature, or prestige, will lead to a joyful life.

Taoists believe there are Three Jewels all Taoists should live by - compassion, moderation and humility.  The religious aspect of Taoism is polytheistic.  There are a number of deities each believed to be a manifestation of some aspect of the Tao.  Taoists, however, do not pray to these deities, they are not personified nor can they solve any of life’s problems.  Taoists solve problems through meditation and observation.

The heart of Taoist ritual is the concept of bringing order and harmony to the cosmos as a whole.  Taoist rituals involve purification, meditation and offerings to the many deities.  The details of rituals are often highly complex and technical and therefore normally left to priests, with the congregation playing little part.  The rituals involve the priests (and assistants) chanting, dancing and playing instruments (particularly wind and percussion).  Taoism also involves several physical practices; breathing exercises, massages, martial arts, yoga and meditation.  These are designed to transform a person both mentally and physically and bring them into harmony with the Tao.

Taoism, Confucianism and Buddhism are the three most dominant religions amongst the Chinese people.  They all have long and colourful histories and all have at one time or another been referred to as a philosophy rather than a religion.  Taoism is in the unique position of being a philosophy that was able to take on religious aspects, derived from folkloric Chinese customs and thus satisfy all adherents and prospective adherents.

In part two we will look a little deeper at the three jewels of Taoism and ask whether or not these are the only aspects of Taoism in common with Islam.  We will also discuss the concept of God in Taoism in a little more depth and compare it with the monotheism of Islam.

Next: What is Taoism? (part 2 of 2): Common virtues do not make a religious connection