Sixth Commandment: Come not near to the orphan’s property, except to improve it, until he (or she) attains the age of full strength. 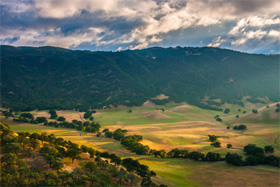 Divine wisdom dictated that the religion of Islam be delivered to humanity at the hands of an orphan, someone who God raised to convey His final message to humanity.  Quite naturally, orphans are more than mere shadows in Islam.

Islamic Law defines an orphan to be a child that who is deprived of the benefits of parenting by death of the father.

Much like the Arab society before Islam, orphans do not fare much better in the US today.

Today there are estimated over 132 million orphans in the world.  Over 25 million American children (more than one in three) are being raised in a family without a father.[1]  Over 50% of youth in shelters and on the streets reported that their parents either told them to leave or knew they were leaving but did not care.  As many as 2.8 million children live on the streets, a third of whom are lured into prostitution within 48 hours of leaving home.  1 in 8 youth under the age of 18 will leave home and become homeless in need of services.  In 2007, 513,000 orphaned children lived outside of the home in substitutive/foster care.  The Trafficking Victims Protection Reauthorization Act of 2005 cited the Congressional finding that 100,000-300,000 children in the United States are at risk for commercial sexual exploitation at any time.[2]  A University of Pennsylvania study estimates nearly 300,000 children in the United States are at risk of being sexually exploited for commercial uses.

In the US, the word ‘orphan’ is rarely used.  According to Dr.  Francine Cournos, author of City of One: A Memoir, "today’s orphans in the United States are foster care children." The term foster children is often used for children in foster homes, group homes, and institutions.

Twenty two verses of the Muslim scripture emphasize taking care of the orphans.  Islam protected the orphans from being neglected and legislated rights for them.  One of those rights, formulated as a commandment, is to spend money for their benefit.  Today, in the US, that would mean, for example, that the foster parents should spend the $420/month (that is the national average) they receive per child for the welfare of the child in the best possible manner.

Seventh Commandment: Give full measure and full weight with justice

The commandment has to do with fairness and justice in all matters, financial and otherwise.  Fair dealing with fellow human beings is God’s command.  The big question is how you can stand by the principle of fair dealing, especially in business, when it seems so advantageous not to.  Why should you be fair in an unfair world? The simple answer: it’s God’s command.  God wants us to be ethical and play fairly.  You must first accept the basic commandment and moral principle of fair and honest practices.  Widespread economic and racial inequalities, unfair lending practices, and lack of affordable housing makes one wonder, what justice and whose justice? The answer is justice according to God’s rules.  The only way to solve them is to fulfill God’s command and give others their dues.

Eight Commandment: Whenever you speak, say the truth even if a near relative is concerned

The commandment is not limited to fairness in speech, it includes behavior.  God requires us to treat others fairly, including the relatives.  If a parent or a friend makes a mistake, should we say that he is in error? Yes, knowing full well that it is not a license to be rude and insulting, but a matter of fairness.  In a similar vein, favoritism, cronyism, and nepotism are unethical.  Islam commands its followers to be ethical and just in the face of conflicting emotions like love and hatred for the other.  A Muslim is required to speak the truth and be honest without getting influenced by the relatives.

In general, fulfilling covenants and keeping pledges is one of the foundations of Islam.  It ensures trust, maintains justice, and brings equality in society.

In specific, a Muslim is required to keep his covenant with God.  The basic principle of Islam is that God commands and forbids, hence God is to be obeyed.  The ‘Covenant of God’ is the promise made to God that acknowledges this basic principle.  As a consequence, God rewards and punishes.

A Muslim is supposed to fulfill pledges and keep promises; it is an indication of loyalty to his word and to God.  Negligence in this matter indicates hypocrisy.  Aptly, God ends with an emphasis:

"This is what He commands you to do, so that you may bear in mind."

So, if you have not already made a promise to God to obey Him, then now is the time to do so!

Tenth Commandment: And, indeed, this is My Straight Path, so follow it, and do not follow other paths, for they will separate you away from His Path.  This He has ordained for you that you may become pious."

The last commandment is the most comprehensive, combining in itself the entire religion.  God basically tells us that this is My ‘Straight Path’, you must follow it.  The ‘Straight Path’ of God is His religion that he sent us through His prophets, completing it with His final message which He sent through Prophet Muhammad, may the mercy and blessings of God be upon him.  Every human being is required to follow this final message of Islam and leave all other ‘paths.’ All other paths, without exception, lead a person away from God and that amounts to destruction.  The other "paths" are ancient religions that have been corrupted or cancelled as well as misleading ideologies and philosophies.  Sticking closely to God’s "Straight Path" keeps one protected from slipping or losing their way.

Thus we conclude the ten commandments from God that are relevant and applicable to our times, and provide the best framework to develop the spiritual side of human beings.