The Great Women behind Great Men (part 1 of 4): The Mother

Description: Mary (Mariam) the daughter of Imran and the mother of Jesus. 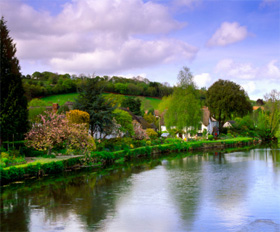 Behind every great man stands a woman; behind every man stands a great woman; behind every successful man stands a woman.  These are three different versions of an old saying, best remembered as a feminist slogan of the 1960s and 1970s.  When you think about it however, it rings true.  How do we respond when we hear about the man whose mother gave up everything to give him an education, the woman who worked 3 jobs to raise her children, and the woman who stands silently in the background as her husband rises to power as a statesman, businessman, politician, or educator? Men rise to soaring heights when the women in their lives nurture, support and encourage them to be the best men that they can be.  Even the Prophet’s of God benefitted from the wise counsel of the women in their lives.

Today we start a series of articles about the great women who stood, not behind but at the side of the men in their lives.  These great women, in their own individual ways, supported and encouraged men whose lives were fraught with danger and monumental change.  Mothers, wives, daughters; the influence these women have over the men in their lives is remarkable.  Islam calls these women the best of humankind.

‘The best women of humankind are four: Mariam, daughter of Imran, Assiya, the wife of Pharaoh, Khadija, daughter of Khuwailid, and Fatima the daughter of the Messenger of God[1].’

The key to success for any woman is to live life according to God’s guidance.  As we know, this guidance is contained in and completed by the Quran and the traditions of Prophet Muhammad.  Let us begin with mothers; Islam emphasises their significant role on numerous occasions.  Prophet Jesus, peace be upon him, says, "...and He has made me blessed wheresoever I be, and has enjoined on me prayer, and alms, as long as I live, and to be dutiful to my mother, and made me not arrogant." (Quran 19:30-32)

And when the angels said: ‘O Mary!  Verily, God has chosen you, purified you, and chosen you above the women of the worlds of mankind and jinn.’ (Quran 3:42)

Prophet Muhammad’s son in law and close companion Ali, said, "I heard the Prophet of God saying Mary, the daughter of Imran was the best among women."[2]

Maryam, the Arabic word for Mary, means maidservant of God.  Mary, the mother of Jesus, was dedicated to God before she was born.  Mary’s mother dedicated her child to the temple and by doing so she secured Mary’s freedom because she understood that true freedom was only attainable through complete submission to God.

Mary grew up having complete trust in God and her story can be found in Quran, particularly in chapters 3 and 19.  In chapter 5 of Quran Mary is referred to as a siddiqa (truthful one) and the Arabic word siddiqa implies more than just speaking the truth.  It indicates one who achieves a very high level of righteousness.  It means that one is truthful, not only with themselves and those around them, but also with God.  Mary was a woman who fulfilled her covenant with God, Whom she worshiped with full submission.  She was pious, chaste, and devout; the woman chosen above all other women to be the mother of Jesus.

After the birth of Jesus, Mary faced incredible hardship. Even though she was a young woman of faith, character and self control, try to imagine the courage it took for her to return to her village with a babe in arms. She left the village a young woman not much older than a child but with a reputation for piety and righteousness.  She returned as an unmarried mother of a new born child. Imagine the talk, the gossip and accusations. When the townspeople surrounded and questioned her she followed God’s instructions and did not speak.  Jesus himself, a baby cradled in Mary’s arms, spoke, declaring himself to be a prophet from God. (Quran 19:30)

Islam tells us very little about the life shared by Jesus and his mother Mary. Of course we can surmise that Mary was a woman of her time. With the exception of her education and possibly her ability to read, Mary would have lived and learned just like the other Jewish girls around her. She would have kept house, cooked, cleaned, sewed, walked to the well for water but above all she was an educator. It is easy to imagine Jesus sitting on her lap or at her feet listening to the stories of her people and their prayers. He would also have experienced at close hand Mary’s profound love and trust in God. How much of Mary’s character influenced Jesus as he grew up?  A great deal, is the most probable answer.

As Jesus grew and began his mission, Mary must have behaved like any other mother. She probably swallowed her fears and encouraged her son to strive to please God. Mary would have sensed the danger of Jesus’ mission yet undoubtedly she held onto her total trust in God and conveyed her sense of contentment with God’s will to her son.

The mother’s role is both monumental and overwhelming. Not only does she go through both the joys and difficulties of pregnancy and giving birth, she dedicates her entire life to nurturing and caring for her children.  It is her responsibility to raise and to educate them to be righteous and pious human beings.  She cooks, cleans, nurtures and educates, she is also responsible for their spiritual, emotional and physical health and well-being. A mother’s role does not end when her child grows and begins a life of his or her own, it goes on and on and continues to influence her children and grandchildren.

In this day and age when the role of motherhood is being undermined at every turn, women should draw strength from great women such as Mary the mother of Jesus.

Next: The Great Women behind Great Men (part 2 of 4): The Foster Mother