Description: A look at genetic, bio-chemical, and molecular similarities found in nature, and whether they prove or disprove the theory of evolution. 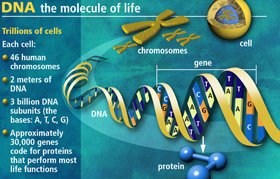 The recent completion of the human gene map within the scope of the Human Genome Project is an important scientific improvement.  However, some results of this project are being distorted in some evolutionist publications.  It is claimed that the genes of chimpanzees are 98% similar to human genes, and this is presented as evidence for the claim that apes are close to humans, and therefore logical ancestors of humans, as claimed by Darwin’s theory of evolution.  The argument is misleading.

This claimed similarity is an exaggerated generalization grounded in the similarity in the amino acid sequences of some 30-40 basic proteins present in man and chimpanzee.  A sequence analysis has been made with a method named “DNA hybridization” on the DNA sequences that are correlated with these proteins and only those limited number of proteins have been compared.  However there are about hundred thousand genes, and therefore 100,000 proteins coded by these genes in humans.  The claim that all the genes of man and ape are 98% similar is based on the similarity in 40 out of 100,000 proteins!

Moreover, the above mentioned basic proteins are common vital molecules present in various other living beings.  The structures of the same kinds of proteins present not only in chimpanzees, but also in completely different living beings, are very similar to that in humans.

For example, the genetic analyses published in New Scientist have revealed a 75% similarity between the DNA’s of nematode worms and man.  (New Scientist, 15 May 1999, p.27) This definitely does not mean that there is only a 25% difference between man and these worms!

Furthermore, the analyses done on some proteins have shown man as close to some very different living beings.  In a survey carried out by the researchers at Cambridge University, some proteins of land dwelling animals were compared.  Amazingly, in nearly all samples, man and chicken were paired as the closest relatives.  The next closest relative was the crocodile.  (New Scientist v.103, 16 August 1984, p.19)

These examples show that genetic similarity does not constitute evidence for the theory of evolution.  This is because the genetic similarities are not in line with the alleged evolution schemes and, on the contrary, they yield largely inconsistent results.

Not surprisingly, when the issue is evaluated as a whole, it is seen that the subject of “bio-chemical similarities” does not constitute evidence for evolution, but, on the contrary, leaves the theory in the lurch.  Dr. Christian Schwabe, a biochemistry researcher from the Medical Faculty of South Carolina University, is an evolutionist scientist who has spent years trying to find evidence for evolution in the molecular domain.  He particularly did research on insulin and relaxin-type proteins and tried to establish evolutionary relationships between living beings.  However, he had to confess many a time that he could not find any evidence for evolution at any point in his studies.  He said:

“Molecular evolution is about to be accepted as a method superior to paleontology for the discovery of evolutionary relationships.  As a molecular evolutionist I should be elated.  Instead, it seems disconcerting that many exceptions exist to the orderly progression of species as determined by molecular homologies; so many, in fact, that I think the exception, the quirks, may carry the more important message” (Christian Schwabe, “On the Validity of Molecular Evolution”, Trends in Biochemical Sciences.  V.11, July 1986)

Based on the recent findings obtained in the field of molecular biology, the renowned biochemist Prof. Michael Denton made the following comments:

“Each class at molecular level is unique, isolated and unlinked by intermediates.  Thus, molecules, like fossils, have failed to provide the elusive intermediates so long sought by evolutionary biology… At a molecular level, no organism is “ancestral” or “primitive” or “advanced” compared with its relatives… There is little doubt that if this molecular evidence had been available a century ago… the idea of organic evolution might never have been accepted.” (Michael Denton, Evolution; “A Theory in Crisis”, London; Burnett Books 1985 pp.290-291)

It is surely natural for the human body to bear some molecular similarities to other living beings because they are all made up of the same molecules; they all use the same water and atmosphere; and they all consume foods consisting of the same molecules.  Certainly, their metabolisms, and therefore genetic make-up, would resemble one another.  This, however, is not evidence that they evolved from a common ancestor.

This “common material” is not the result of evolution but of “common design”; that is, being created upon the same plan.

It is possible to explain this subject with an example.  The majority of buildings  are constructed with similar materials (brick, iron, cement, etc.).  This, however, does not mean that these buildings “evolved” from each other.  They are constructed separately by using common materials.  The same is true of living beings as well.

Darwinists are distorting the results of the Human Genome Project.  Life did not originate as a result of unconscious coincidences as evolution claims, but as the result of the creation of God, the Almighty, the Owner of infinite knowledge and wisdom.