Description: The religion of Islam is based upon the Quran (the Word of God) and the Sunnah (teachings and attributes of Prophet Muhammad).  Part 1: Quran: The Primary Source of Islam. 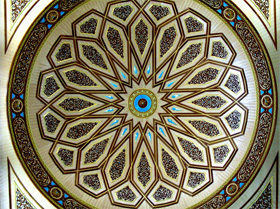 The ultimate manifestation of God’s grace for man, the ultimate wisdom, and the ultimate beauty of expression: in short, the word of God.  This is how the German scholar, Muhammad Asad, once described the Quran.  If one were to ask any Muslim to depict it, most likely they would offer similar words.  The Quran, to the Muslim, is the irrefutable, inimitable Word of God.  It was revealed by God Almighty through Prophet Muhammad, may the mercy and blessings of God be upon him.  The Prophet himself had no role in authoring the Quran, he was merely a Messenger, repeating the dictates of the Divine Creator:

The Quran was revealed in Arabic, to Prophet Muhammad, over a period of twenty-three years.  It is composed in a style so unique, that it cannot be deemed either poetry or prose, but somehow a mixture of both.  The Quran is inimitable; it cannot be simulated or copied, and God Almighty challenges mankind to pursue such an endeavor if he thinks he can:

The Quran’s language is indeed sublime, its recitation moving, as one non-Muslim scholar noted, “it was like the cadence of my heartbeat”.  Due to its unique style of language, the Quran is not only highly readable, but also relatively easy to remember.  This latter aspect has played an important role not only in the Quran’s preservation, but in the spiritual life of Muslims as well.  God Himself declares,

“And We have indeed made the Quran easy to understand and remember; then is there anyone that will receive admonition?” (Quran 54:17)

One of the most important characteristics of the Quran is that it remains today, the only holy book which has never changed; it has remained free from any and all adulterations.  Sir William Muir noted, “There is probably in the world no other book which has remained (fourteen) centuries with so pure a text.” The Quran was written down during the lifetime and under the supervision of the Prophet, who himself was unlettered.  Thus its authenticity is unblemished, and is its preservation is seen as the fulfillment of God’s promise:

“We have, without doubt, sent down the Message, and We will assuredly guard it from corruption.” (Quran 15:9)

The Quran is a book which provides the human being the spiritual and intellectual nourishment he/she craves.  Its major themes include the oneness of God, the purpose of human existence, faith and God-consciousness, the Hereafter and its significance.  The Quran also lays a heavy emphasis upon reason and understanding.  In these spheres of human understanding, the Quran goes beyond just satisfying the human intellect; it causes one to reflect. Unlike other scriptures, there are Quranic challenges and prophecies. It is as well full of facts that have only recently been discovered; One of the most exciting fields in recent years has been the discovery of significant amount of scientific information in the Quran, including the event of the Big Bang, embryological data, and other information concerning astronomy biology, etc., there is not a single statement that has not been borne out by modern discoveries.  In short, the Quran fulfils the heart, the soul, and the mind.  Perhaps the best description of the Quran was given by Ali, the cousin of Prophet Muhammad when he expounded upon it as,

“The Book of God.  In it is the record of what was before you, the judgment of what is among you, and the prophecies of what will come after you.  It is decisive, not a case for levity.  Whoever is a tyrant and ignores the Quran will be destroyed by God.  Whoever seeks guidance from other than it will be misguided.  The Quran is the unbreakable bond of connection with God; it is the remembrance full of wisdom and the straight path.  The Quran does not become distorted by tongues;  nor can it be deviated by caprices. It never dulls from repeated study; scholars will always want more of it.  The wonders of the Quran are never ending.  Whoever speaks from it will speak the truth, whoever rules with it will be just, and whoever holds fast to it will be guided to the straight path.” (Al-Tirmidhi)

Next: Islamic Sources: Quran and Sunnah (part 2 of 2)

As Salaamu Alaykum, this is my first time here and I am impressed with the appearance, style, colors, and overall look of this site. Please don't change. You have an appealing look and the information is clear and genuine. As Salaamu Alaykum.

A very wonderful explanation and agenuine quotation, May Allah guide us the right path.

Just a comment Islam at its beginning starts with Allah & it will End With Allah. This section could - should be Allah, The Quran & Sunnah The people of Allah, the people of the Book (Quran), and even Abu Walid This site, in my 20 years in Islam, always looking, for Allah Islam and Simplicty..you are the BEST 1 Keep up the effort, all is possible in and with Allah.