Description: Arguments are given proving God’s existence and the truthfulness of Prophet Muhammad that address the mind as well as the heart. 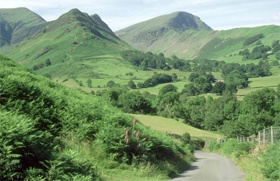 If they deny God, then how did they create themselves?

"Or (if they refuse to believe in God Who created them, then) were they created without a Creator or are they (under the misconception that they are) creators themselves?" (Quran 22:35)

The magnificent universe gives them a moment to think:

"Or (if as they say, God did not create everything, then) did they (themselves) create the heavens and the earth?  The fact is that they have no conviction (no faith in the fact that God is the only Creator and the only One deserving worship)." (Quran 22:36)

They think they control the world.  They must distribute God’s favors then!

"Or are the treasures (bounties) of your Lord with them (in their control) or (if they do not have complete control) do they possess authority (to distribute God’s bounties as they please)?" (Quran 22:37)

Since the unbelievers have no say in the distribution of God’s favors, they have no say in who God chooses to be His prophet and deliver His message.  Thus, there is no reason to reject a prophet simply because he was born in a place and time far from us.

Do they have access to the heaven from where they get proof of their theories?

"Or do they (the unbelievers) have a ladder (stretching into the heavens) by which they are able to eavesdrop (divine revelation that permits them to disbelieve?)  So (if they have heard some revelation to substantiate their claims,) let their eavesdropper produce a clear proof (from the revelations to prove the legitimacy of their disbelief).  Or (are you polytheists saying that) daughters are for Him (by your claim that the angels are the daughters of God) and sons (are reserved exclusively) for you (because you like to have sons)?" (Quran 22:38-39)

Some people avoid these reminders as if they will be asked to pay for listening to the truth.  But the true caller to faith, like a prophet, will never ask for anything in return:

"Or do (the polytheists reject faith because) you (O Prophet Muhammad) ask them a fee so (and because of this fee they feel as if) they are burdened by a penalty (making it difficult for them to accept your message)?  Or do they (reject faith because they) have knowledge of the unseen (proving their claims) which they are writing (down to ensure that it continues)? (The fact is clear that the unbelievers and the polytheists have nothing concrete to substantiate their beliefs and actions).  Or are they plotting something (against Prophet Muhammad which they are waiting to carry out)?  Indeed those who commit disbelief will themselves be ensnared (trapped) in a plot (when God punishes them)." (Quran 22:40-42)

The truth is that all the deniers of God and His Prophet have something else in their hearts which they depend on to provide their needs.  It could be Jesus, an idol, a grave, wealth, power, or anything which they believe will sustain them and save them:

"Or do (they reject faith because) they have a god besides Allah? God is Pure (free) from the partners they ascribe to Him (none can be worshipped except God.)" (Quran 22:43)

Their mistaken belief and stubbornness to accept the truth makes them see everything from a distorted vision.  Therefore, God says that even if they see a sign of punishment coming over them they will dismiss it as a product of the physical laws of the universe, not giving any thought to the One who made these laws as well as the universe:

(The unbelievers are so obstinate that) If they see a part of the sky falling down (towards them as punishment) they (will deny it and) say, "This is (only) a cloud in stacked (thick) layers." (Quran 22:44)

After all the efforts to remove the misunderstanding from the minds of these people and sincerely calling them to the way of God, the last thing to do is to ignore them:

"So (it is best that you) leave them (without insistently preaching to them) until they meet their day (the Day of Judgement) when they will fall unconscious (after hearing the blast of the trumpet)." (Quran 22:45)

We should try our utmost with all sincerity to call people to the right path.  But after a certain time when we are convinced that we have done all that we could, it is time to ignore them.  At times, such people not only deny the message but also try to bring about weak misconceptions that consume one’s time, we should avoid such people. God says:

"The (Day of Judgement will be the) day when their schemes will be of no benefit to them (but rather be to their detriment) and they will not be assisted (against God’s punishment).  There shall surely be another punishment (in this world) besides this (punishment of the life to come) for the oppressors (the unbelievers) but they have no idea." (Quran 22:46-47)

The thing to do in all such trying situations is to be patient as God comforted Prophet Muhammad, may the mercy and blessings of God be upon him:

"(Therefore, O Prophet Muhammad) Bear patiently with the decision of your Lord (to allow the unbelievers respite until the appointed time of their punishment) for you are under Our protection (and have nothing to fear from them).  Glorify the praises of your Lord when you rise (sleep and stand in prayer).  And glorify Him during a portion of the night (in the night prayer of Tahajjud) and even after the stars have vanished (at early dawn)." (Quran 22:48-49)

God is incredibly kind to us! He wants us to avoid the most dangerous thing which might creep into our heart and destroy our sincere intentions: self admiration.  Naturally, when we mingle too much with people who are not on the right track, we feel sorry for them but at times we also feel superior to them.  That is why God reminds us that to avoid this feeling we only have one tool: to glorify God at all times.  Thus, we will always be alert and conscious that it is God alone, who is most Supreme and free from flaws.  Whereas, we human beings can never declare ourselves free from punishment until God saves us out of His mercy on the Day of Judgment.