Description: Insight into Chapter 52 of the Quran in which God takes mighty oaths to make an important point. God tells us what will happen when impending doom arrives and gives the real reasons why people ignore it. 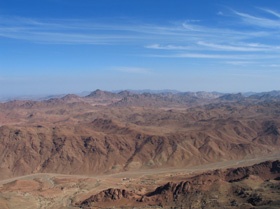 This chapter of the sacred scripture takes its name from the opening verse in which God takes an oath by Mount Toor.  It is a mountain near the place that God spoke to Prophet Moses, peace be upon him.

What an honour it is for a person if God speaks to him directly!  Sometimes one thinks, "Why does God not speak to us also?"  The truth is that God speaks to all human beings through the Quran, yet most people ignore it!  They do not take the time to find what the Quran says to them!

The purpose of God’s communication is to give us conviction in the truth of Islam and to guide us to the path of right conduct.  When we listen to God’s words we are convinced that this world has not been created without a purpose.  We understand that it is a test and there is a reward for the righteous and a painful end for those who deny the message.  To ensure that we don’t take this warning lightly, God takes some powerful oaths:

Even a simple statement from the Lord of the Worlds would have been enough.  If He has taken five oaths, then it must be so we pay close attention to His warning.  The purpose of that warning is to tell us of the terrible punishment:

"Indeed, the punishment of your Lord shall take place (on the Day when all will be judged). There shall be none to prevent it." (Quran 52:7-8)

What will happen on that terrifying day?

"(It will be) The day when the sky shall tremble uncontrollably…and the mountains will fly through the air (as dust particles after being reduced to dust)." (Quran 52:9-10)

If we are deluding ourselves by saying things like: "Well, I am not convinced" or "It doesn’t make sense to me," then listen to what God says to all those who question the true warnings:

"Destruction be to the rejecters (who deny the coming judgment) on that day (the Day of Judgment)." (Quran 52:11)

Have you ever thought why do some people believe and some do not?  After all they are all made of bones and flesh, so what’s the big difference?  Why do people who are otherwise intelligent and capable, not believe in God’s words?  The Quran states:

"(The rejecters are) those who are in (empty) discourse amusing themselves." (Quran 52:12)

Those who reject faith are busy enjoying themselves.  They do as they please with little concern for the day when they will be judged for everything they did.

In this world people continue to enjoy their lives and are honored by the society even if they disobey God and anger Him all the time, but in the Hereafter they will be treated according to their deeds and their faith:

(Do not forget) The Day when they will be forcibly shoved into the Fire of Hell. (Quran 52:13)

And all their denial and their logics will be of no use:

They amuse themselves by making fun of those who follow the true religion by accusing them of being brainwashed. But on that day when they will be thrown into the fire, they will be asked:

"‘Is this magic (as you used to say about the miracles of the prophets and the books God gave them) or are you unable to see?’ (Today you are unable to deny its existence!)." (Quran 52:15)

God is not unjust. In this world, the path of righteousness might not be pleasant at times, but keep in mind that the bumps on the road are a mere test from God.  When people around you start blaming the religion and saying, "If your religion was so good then why are you being treated like this?", "Where is the success you say God has promised?", then remember that this world is not the place where we can see all the outcomes of our deeds.  The results will be shown in the life that comes after death, when those who led a frivolous life spend in vanities will be told:

"Enter into it! Whether you bear it with patience or you do not, it will make no difference to you! (In any event, your suffering will be the same.) You are being punished only for what (sins) you used to do." (Quran 52:16)

Those punished won’t be punished without reason!  When those who led a righteous life will be presented with the amazingly beautiful Paradise:

"Truly the righteous shall be (enjoying themselves) in Paradise and its bounties, enjoying what (blessings) their Lord gives them. (One of the greatest blessings is that) their Lord saved them from the punishment of the Blaze (Hellfire)." (Quran 52:17-18)

While people all around them were only concerned with the physical pleasures of the world - money, sex, and alcohol to name a few - these God conscious people remembered that life is not made just for enjoyment but is a test of obedience.  Thus, their reward will be the eternal enjoyment of Paradise, the unending pleasure:

"(They will be told:) "Eat and drink to your heart’s content, this is the reward for your good deeds."  They will be reclining on couches arranged in rows and We shall marry them to fair maidens with large, wide eyes." (Quran 52:19-20)

The reality of our lives is that our pleasure is incomplete without our families.  That is why we celebrate holidays and personal achievements with our family members.  God will join all the family members who followed the righteous path even if they are on different levels according to their deeds.  Those on the lower ranks will be raised in level to be united with their parents, children, and spouses.

"We shall unite the true believers with those of their descendants who follow them in their faith, and shall not deny them the reward of their good deeds - everyone is responsible for his deeds." (Quran 52:21)