Description: An account of how and when Islam first entered China. 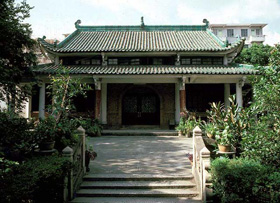 The ‘Great Mosque of Guangzhou’ is also known as Huaisheng Mosque which means ‘Remember the Sage’ (A Memorial Mosque to the Prophet) and is also popularly called the ‘Guangta Mosque’ which translates as ‘The Beacon Tower Mosque’.  Huaisheng Mosque is located on Guantgta Road (Light Pagoda Road) which runs eastwards off Renmin Zhonglu.

Prior to 500 CE and hence before the establishment of Islam, Arab seafarers had established trade relations with the “Middle Kingdom” (China).  Arab ships bravely set off from Basra at the tip of the Arabian Gulf and also from the town of Qays (Siraf) in the Persian Gulf.  They sailed the Indian Ocean passing Sarandip (Sri Lanka) and navigated their way through the Straits of Malacca which were between the Sumatran and Malaysian peninsulas en route to the South China Sea.  They established trading posts on the southeastern coastal ports of Quanzhou and Guangzhou.  Some Arabs had already settled in China and probably embraced Islam when the first Muslim deputation arrived, as their families and friends back in Arabia, had already embraced Islam during the Prophet’s revelation (610-32).

Guangzhou is called Khanfu by the Arabs who later set up a Muslim quarter which became a centre of commerce.  Guangzhou’s superior geographical position made it play an important role as the oldest trading and international port city in China.  Witnessing a series of historical events, China has become a significant place in history and one of the fastest growing regions in the world enjoying unprecedented prosperity.

Whilst an Islamic state was founded by Prophet Muhammad, may the mercy and blessings of God be upon him, China was enduring a period of unification and defense.  Early Chinese annals mentioned Muslim Arabs and called their kingdom al-Medina (of Arabia).  Islam in Chinese is called “Yisilan Jiao” (meaning “Pure Religion”).  A Chinese official once described Mecca as being the birthplace of Buddha Ma-hia-wu (i.e. Prophet Muhammad).

There are several historical versions relating to the advent of Islam in China.  Some records claim Muslims first arrived in China in two groups within as many months from Abyssinia (Ethiopia).

Ethiopia was the land where some early Muslims first fled in fear from the persecution of the Quraysh tribe in Mecca.  Among that group of refugees were one of Prophet Muhammad’s daughters Ruqayya, her husband Uthman ibn Affan, Sad Ibn Abi Waqqas and many other prominent Companions who migrated on the advice of the Prophet.  They were successfully granted political asylum by the Abyssinian  King Atsmaha Negus in the city of Axum (c.615 CE).

However, some Companions never returned to Arabia.  They may have traveled on in the hope of earning their livelihood elsewhere and may have eventually reached China by land or sea during the Sui Dynasty (581-618 CE).  Some records relate that Sad Ibn Abi Waqqas and three other Companions sailed to China in c.616 CE from Abyssinia (Ethiopia) with the backing of the king of Abyssinia.  Sad then returned to Arabia, bringing a copy of the Holy Quran back to Guangzhou some 21 years later, which appropriately coincides with the account of Liu Chih who wrote “The Life of the Prophet” (12 vols).

One of the Companions who lived in China is believed to have died in c.635 CE and was buried in the western urban part of Hami.  His tomb is known as “Geys’ Mazars” and is revered by many in the surrounding region.  It is in the northwestern autonomous province of Xingjian (Sinkiang) and about 400 miles east of the latter’s capital, Urumqi.  Xingjian is four times the size of Japan, shares its international border with eight different nations and is home to the largest indigenous group of Turkic-speaking Uyghurs.  Hence, as well as being the largest Islamized area of China, Xingjian is also of strategic importance geographically.

The Quran states in unequivocal words that Muhammad was sent only as a Mercy from God to all peoples (21:107), and in another verse:

This universality of Islam facilitated its acceptance by people from all races and nations and is amply demonstrated in China where the indigenous population, of ethnic varieties of Chinese Muslims today is greater than the population of many Arab countries including that of Saudi Arabia.

The history of Huaisheng Mosque represents centuries of Islamic culture dating right back to the mid-seventh century during the T’ang Dynasty (618-907) - “the golden age of Chinese history”.  It was in this period, eighteen years after the death of the Prophet, that Islam - the last of the three monotheistic religions - was first introduced to China by the third Caliph, Uthman Ibn ‘Affan (644-656 CE/23-35 AH ).

Uthman was one of the first to embrace Islam and memorize the Holy Quran.  He possessed a mild and gentle nature and he married Ruqayyah and following her death, Umm Kulthum (both were daughters of the Prophet).  Consequently he was given the epithet of ‘Dhu-n-Nurayn’ (the one with the two lights).  Uthman was highly praised for safeguarding the manuscripts of the Quran against disputes by ordering its compilation from the memories of the Companions and sending copies to the four corners of the Islamic Empire.

Uthman sent a delegation to China led by Sad Ibn Abi Waqqas (d. 674 CE/55 AH) who was a much loved maternal uncle of the Prophet and one of the most famous Companions who converted to Islam at the age of just seventeen.  He was a veteran of all the battles and one of the ten who it is reported that the Prophet said were assured a place in paradise.

In Medina, Sad, using his ability in architecture added an Iwan (an arched hall used by a Persian Emperor) as a worship area.  He later laid the foundation of what was to be the first Mosque in China where early Islamic architecture forged a relationship with Chinese architecture.

According to the ancient historical records of the T’ang Dynasty, an emissary from the kingdom of al-Medina led by Sad Ibn Abi Waqqas and his deputation of Companions, who sailed on a special envoy to China in c.650 CE, via the Indian Ocean and the China Sea to the famous port of Guangzhou, thence traveled overland to Chang’an (present day Xi’an) via what was later known as the “Silk Route”.