Description: From the depths of slavery to lofty minarets. 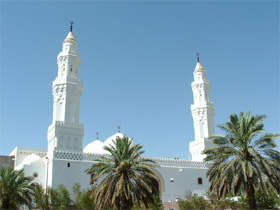 Bilal Ibn Rabah’s acceptance of Islam is a powerful story, involving slavery, conversion, torture, and rescue.  It touches on aspects of racism, is a lesson in pluralism, and teaches us that piety is the only way to measure of a person’s worth. Bilal’s story is also the story of the adthaan, or call to prayer, for Bilal was also Islam’s first muaddhin[1].

Across the globe, one of the most poignant symbols of Islam is the melodious call to prayer. Its sublime sound rings out across cities and meadows, on beaches, in fertile fields and in barren valleys.  Once heard, the sound of the Adthaan is never forgotten and many people have entered the religion of Islam simply by hearing this soulful sound.  Adthaan, which means announcement is mentioned only once in the Quran but never the less, it plays an integral part in the life of a Muslim.

For those born into Islam it is often the first sound they hear.  Immediately after birth, the father or any other important Muslim in the child’s life holds the newborn and whispers the words of adthaan into his right ear.  The time for prayer is announced five times per day, from lofty minarets or from watches and computers.  When a Muslim hears the adthaan, preparation for prayer begins. Bilal, because of his beautiful voice had the honour of being the first man in the world to call the adthaan and call the worshippers to prayer.

"O believers, when proclamation is made for prayer on the Day of Congregation, hasten to God’s remembrance and leave business aside; that is better for you, if you did but know."  (Quran 62:9)

In the year 622 Prophet Muhammad, Bilal and most of the fledgling Muslim community migrated to Medina.  It was here that Prophet Muhammad, may the mercy and blessings of God be upon him, began the work of setting up the Muslim nation. Bilal was at his side whenever possible and as one commentator said, "Every event in Mohammad’s life was an event in the life of Bilal"[2].  It is said that Bilal was so close to Prophet Muhammad he had the duty of waking him in the mornings.[3]

According to authentic traditions Prophet Muhammad was concerned and anxious to find a way to summon the Muslims to prayer. He wanted something unique. It was here that Abdullah ibn Zaid, one of the Companions, informed the Prophet about a dream that he had.

‘There appeared to me in a dream a man who was wearing two green garments, in whose hand was a bell.  I said, "O slave of God, will you sell that bell?" he said, "What will you do with it?" I said, "We will call the people to prayer with it."  He said, "Shall I not show you something better than that?" I said, "Yes."  He said, "Say, Allaahu akbar Allaahu akbar …"[4]

The tradition continues.  ‘Prophet Muhammad listened to the description of the dream and said, "This is a true dream, (meaning a dream sent by God).  Get Bilal and tell him what you have seen, teach him the words so that he can give the call, because he has a beautiful voice."  So I went to Bilal and told him my dream,  so he gave the call to prayer.  Umar ibn al-Khattab heard the call while still in his house; he rushed out, dragging his cloak behind him, saying, "By the One who sent you with the truth, O Messenger of God, I saw the same dream."  Prophet Muhammad was pleased and said "Praise be to God."‘[6]

In the decade after the migration Bilal accompanied Prophet Muhammad on all his military expeditions, and had the honour of carrying Prophet Muhammad’s spear. He fought in the Battle of Badr, and in the aftermath he killed his former master, Umayya ibn Khalaf.  Bilal was also present at the battle of Uhud and the battle of the Trench.[7]

Bilal’s  life after his conversion to Islam contained many moments of great joy however his finest hour must have been in 630 BCE, on an occasion regarded as one of the most hallowed moments in Islamic history.  After the Muslim forces had conquered Mecca, Bilal ascended to the top of the Kaba, the house of God, to call the believers to prayer.  This was the first time the call to prayer was heard within Islam’s holiest city.

After the death of Prophet Muhammad, Bilal never felt the same again.  A day after the Prophet’s death, Bilal went to make the usual adthaan for morning prayer.  While giving the adthaan he broke down and streams of tears began to roll freely down his cheeks.  He managed to finish the rest of the adthaan in a low voice.  After that, Bilal stopped calling the adthaan in Madina..

The memories of Madina were too hard for him to live with, and he left for another place.  Later, upon his visit to Madina at the behest of the Prophet Muhammad’s grandsons he agreed to give the adthaan.  Old memories that lay deep down in his heart were revived and those who had experienced the golden days with Prophet Muhammad could not hold back their tears.

It is believed that Bilal died in Syria between 638 and 642 BCE. Imam al-Suyuti in his book ‘Tarikh al-Khulafa’ writes, "He (Bilal) died in Damascus when he was just over sixty years old." Others are of the opinion that he died in Medina.  We can be sure that his eternal abode is Paradise for Prophet Muhammad, may the mercy and blessings of God be upon him, called Bilal "a man of paradise"[8].

[1] The one who calls the believers to prayer.

Previous: Bilal Ibn Rabah (part 1 of 2): From Slavery to Freedom

I am always filled with faith, love and joy, after reading this story. There is only one God, Allah is his name. With this knowledge, I remain hopeful. May Allah continue to protect us all.

MAY ALLAH HAVE MERCY TO ALL BELIEVERS FROM THE FIRST TO THE LAST , AMIIN