What is Scientology? (part 2 of 2): From Intergalactic Wars to Federal Prisons 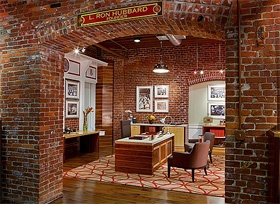 In part 1, a brief overview of Scientology, we learned that across the globe there are various government opinions about whether or not Scientology is a religion.  We also explored the basic belief system of Scientology.  Scientology is not a Christian sect but does profess to believe in a Supreme Being, Scientologists believe in reincarnation and consider humans to be spiritual beings, and higher states of enlightenment can be attained via a process called auditing.  In part 2 we will delve a little deeper and discover the origins of Scientology.

Our motivation for revealing the secrets of Scientology is not to denigrate scientologists or to make a judgement on whether or not Scientology is a religion.  Our motivation is only to compare other religions with Islam and to further the command to seek beneficial knowledge before making decisions.  Some of the information contained below sounds like a fantasy story however every effort has been made to use only reliable sources.  Please bear in mind that the sources used in Part 1 to outline the basic beliefs of Scientology were from official scientology web sites.  Now in the second part of the series we will look at the opinions of a growing body of people leaving Scientology and speaking out against their former religion.  We will also look at official government and law enforcement opinions and charges.

The story of  L Ron Hubbard’s life and rise to power is both interesting and colourful and can be found on line at numerous web sites both for and against Scientology.  As a university student Hubbard found moderate success as a writer of pulp fiction, publishing hundreds of stories in fantasy and science fiction magazines.  After world war 2, where he served briefly as a lieutenant in the Navy, Hubbard met John Whiteside Parsons, a sci fi buff and a founder of CalTech’s Jet Propulsion Laboratory.  Unauthorised biographies link Hubbard  and Parsons’ with black magic, satanic rites and British occultist Aleister Crowley.  Sci-fi writer Lloyd Eshbach  who met Hubbard in the late 1940s recalls him saying “I’d like to start a religion, that’s where the money is.” In 1954 L Ron Hubbard founded the first Church of Scientology in Los Angeles California.

Once Upon a Time

A long long time ago, 75 million years ago on a planet far far away, but still in our galaxy, there lived an intergalactic warlord named Xenu.  He was in charge of 76 planets in this part of the galaxy, including our own planet Earth (Teegeeack).  Xenu‘s problem was that all the plants he controlled were overpopulated.  He needed to get rid of the excess population, so he formulated a plan.  The evil plan could also be called Scientology’s creation story.  This according to countless ex-Scientologists is the first of the doctrines released after paying thousands of dollars to reach level 3 OT (operating thetan)[1]  Apparently the knowledge is potentially so dangerous it could kill those not ready to hear the brutal truth.

However because a Muslim has complete faith in God and knows with certainty that there is no god but God, the Sustainer and Creator of the universe, it is easy for us  to delve further into the intergalactic story and hear the brutal truth.  In contrast to Scientology, there is no secrecy in Islam, no one person is more worthy of being close to God or knowing how to worship Him correctly.  Islam is a religion of informed knowledge.

Thus, to continue the story, according to ex Scientolgists[2]  psychiatrists helped Xenu round up millions of people who were then dumped into volcanoes around the globe and vaporized with bombs.  “This scattered their radioactive souls, or thetans, until they were caught in electronic traps set up around the atmosphere and “implanted” with a number of false ideas — including the concepts of God, Christ and organized religion.  Scientologists later learn that many of these entities attached themselves to human beings, where they remain to this day, creating not just the root of all of our emotional and physical problems but the root of all problems of the modern world”[3].

Implanting false ideas about organised religion and God seems to be a direct contradiction to the stated Scientology belief in God or Supreme Being.  However the real nature of the Supreme Being and the nature of the universe is revealed as a person rises in the ranks of Scientology and undergoes more expensive auditing sessions.  In direct contrast Islam was revealed for all people, in all places, and at all times.  Social status,  or wealth have no bearing on how much Islam a person is entitled to know, nor does the length of time a person has been Muslim.

The Xenu story also helps to explain scientology’s deep hatred of psychiatry.  Scientologists consider many illnesses to be psychosomatic and don’t believe in treating them with medicine, even aspirin.  Islam, on the other hand  instructs the believers to seek a cure from ill health with God but to take full advantage of medical and scientific methods.

Scientology has been under attack, and accused of  criminal dealings almost from the beginning.  Rolling Stone magazine,[4]  in the 2006 article, Inside Scientology revealed and explained the policy known as Fair Game.  “...all who opposed Scientology could be tricked, sued or lied to and destroyed.  This policy was enforced by Scientology’s quasisecret police force, known as the Guardian’s Office.  By the 1970s, among its tasks was “Operation Snow White,” a series of covert activities that included bugging the Justice Department and stealing documents from the IRS.  The plan was discovered in FBI raids on Scientology’s Los Angeles and Washington, D.C., offices in 1977, which yielded wiretap equipment, burglary tools and about 90,000 pages of documents.  Eleven Scientology officials, including Hubbard’s third wife, went to federal prison for their role in the plot, which led to a 1982 sweep of the church’s upper management.”

In 2009 the Church of scientology narrowly avoided being banned in France after being prosecuted for fraud, four leaders were given suspended jail sentences.  In Belgium, too, Scientology is embroiled in a long criminal investigation.  In the same year, the Prime Minister of Australia Kevin Rudd expressed his concern over allegations of “a worldwide pattern of abuse and criminality”.

Scientology has been shut down in Greece, indicted in Spain, restricted in Russia, rebuffed by Sweden’s highest court, expelled from college campuses in Norway, convicted of crimes in Canada and denied status as a charitable organization or a religion in most European countries.  High-ranking Scientologists have been jailed in Italy, France and Spain in connection with what were called crimes associated with Scientology practices, and France keeps Scientology on a list of organizations that need to be monitored for cult activity.[5]

The church has frequently been accused of breaking up families and preying on the vulnerable and in early 2011 the Huffington Post reported that the Church of Scientology in the USA was under investigation for human trafficking and unpaid labour.  However, despite what appears to be overwhelming evidence to the contrary the Church of Scientology continues to describe itself as the religion whose goal is “a civilization without insanity, without criminals and without war, where the able can prosper and honest beings can have rights, and where Man is free to rise to greater heights.”

[4] Inside Scientology is archived at http://www.rollingstone.com/culture/news/inside-scientology-20110208

Previous: What is Scientology? (part 1 of 2): The Eclectic Religion