Description: Famed for his slam dunks and "skyhook", Kareem Abdul-Jabbar discovers the other side of life, spirituality, and accepts Islam. 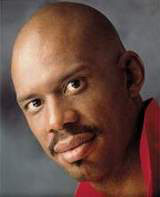 Acknowledged by many players as the greatest basketball player of all time, voted six times the National Basketball Association’s most valuable player, Kareem Abdul-Jabbar is also one of the most visible Muslims in the American public arena.  The 7’ 2”native upper Harlem, born Ferdinand Lewis Alcindor, starred for UCLA before entering the National Basketball Association with the Milwaukee Bucks in 1969.  Alcindor later went to the Los Angeles Lakers.  He was so dominant in college basketball that "dunking,”at which he excelled, was formally banned from the intercollegiate sport.  As a result, Lew Alcindor developed the shot for which he is personally the most famous-the "skyhook"-which has been called the shot that changed basketball, and with the help of which he was to score more than thirty eight thousand points in regular-season NBA play.  When Milwaukee won the NBA title in 1970-71, Alcindor, who was by then Kareem Abdul-Jabbar, was the acclaimed king of basketball.

Lew Alcindor first learned his Islam from Hammas Abdul Khaalis, a former jazz drummer ....  According to his own testimony, he had been raised to take authority seriously, whether that of nuns, teachers, or coaches, and in that spirit he followed the teachings of Abdul Khaalis closely.  It was by him that Alcindor was given the name Abdul Kareem, then changed to Kareem Abdul-Jabbar, literally "the noble one, servant of the Almighty.”  Soon, however, he determined to augment Abdul Khaalis’s teachings with his own study of the Quran, for which he undertook to learn basic Arabic.  In 1973 he travelled to Libya and Saudi Arabia to get a better grasp of the language and to learn about Islam in some of its "home”contexts.  Abdul-Jabbar was not interested in making the kind of public statement about his Islam that he felt Muhammad Ali had in his opposition to the Vietnam War, wishing simply to identify himself quietly as an African American who was also a Muslim.  He stated clearly that his name Alcindor was a slave name, literally that of the slave-dealer who had taken his family away from West Africa to Dominica to Trinidad, from where they were brought to America.

[…] Kareem Abdul-Jabbar affirms his identity as a Sunni Muslim.  He professes a strong belief in what he calls the Supreme Being and is clear in his understanding that Muhammad is his prophet and the Quran is the final revelation…

....For his part, Kareem accepts his responsibility to live as good an Islamic life as possible, recognising that Islam is able to meet the requirements of being a professional athlete in America.

Excerpts from His Book, Kareem

The following are excerpts from the second book he wrote about his basketball career, Kareem, published in 1990[1], telling his reasons for being drawn toward Islam:

[Growing up in America,] I eventually found that .  .  .emotionally, spiritually, I could not afford to be a racist.  As I got older, I gradually got past believing that black was either the best or the worst.  It just was.  The black man who had the most profound influence on me was Malcolm X.  I had read "Muhammad Speaks", the Black Muslim newspaper, but even in the early sixties, their brand of racism was unacceptable to me.  It held the identical hostility as white racism, and for all my anger and resent meant, I understood that rage can do very little to change anything.  It’s just a continual negative spiral that feeds on itself, and who needs that?

.  .  .Malcolm X was different.  He’d made a trip to Mecca, and realized that Islam embraced people of all color.  He was assassinated in 1965, and though I didn’t know much about him then, his death hit hard because I knew he was talking about black pride, about self-help and lifting ourselves up.  And I liked his attitude of non-subservience.

.  .  .Malcolm X’s autobiography came out in 1966, when I was a freshman at UCLA, and I read it right before my nineteenth birthday.  It made a bigger impression on me than any book I had ever read, turning me around totally.  I started to look at things differently, instead of accepting the mainstream viewpoint.

.  .  .[Malcolm] opened the door for real cooperation between the races, not just the superficial, paternalistic thing.  He was talking about real people doing real things, black pride and Islam.  I just grabbed on to it.  And I have never looked back.

KA[4]: Well you know that was who I started my life out as, I’m still my parent’s child, I’m still...my cousins are still the same, I’m still me though.  But I made a choice.  (SG: Do you feel different?  Is it a different feeling when you take on a different name, a different persona?) I really don’t think...I think it has more to do with evolution -- I evolved into Kareem Abdul-Jabbar, I don’t have any regrets about who I was but this is who I am now.

SG: And a spiritual journey, how important was that?

KA: Well as a spiritual journey, I don’t think I would have been able to be as successful as I was as an athlete if it were not for Islam.  It gave me a moral anchor, it enabled me to not be materialistic, it enabled me to see more what was important in the world.  And all of that was reinforced by people, very important people to me: Coach John Wooden, my parents, all reinforced those values.  And it enabled me to live my life a certain way and not get distracted.

SG: When you embraced Islam, was it difficult for other people to come to terms with that?  Did that create a distance between you and others?

KA: For the most part it was.  I didn’t try to make it hard on people; I did not have a chip on my shoulder.  I just wanted people understand I was Muslim, and that’s what I felt was the best thing for me.  If they could accept that I could accept them.  I didn’t...it wasn’t like if you’re going to become my friend you have to become Muslim also.  No, that was not it.  I respect people’s choices just as I hope they respect my choices.

SG: What happens to a person when they take on another name, another persona if you like?  How much did you change?

KA: For me it made me more tolerant because I had to learn to understand differences.  You know I was different, people didn’t oftentimes understand exactly where I was coming from; certainly after 9/11 I’ve had to like explain myself and...

SG: Was there a backlash against people like yourself?  Did you feel that at all?

KA: I didn’t feel like necessarily a backlash, but I certainly felt that a number of people might have questioned my loyalty, or questioned where I was at, but I continue to be a patriotic American...

SG: For a lot of black Americans, converting to Islam was an intensely political decision as well.  Was it the same for you?

KA: That was not part of my journey.  My choosing Islam was not a political statement; it was a spiritual statement.  What I learned about the Bible and the Qur’an made me see that the Qur’an was the next revelation from the Supreme Being - and I chose to interpret that and follow that.  I don’t think it had anything to do with trying to pigeon hole anyone, and deny them the ability to practice as they saw fit.  The Quran tells us that Jews, Christians, and Muslims: Muslims are supposed to treat all of them the same way because we all believe in the same prophets and heaven and hell would be the same for all of us.  And that’s what it’s supposed to be about.

SG: And it’s been very influential in your writing as well.

KA: Yes it has.  Racial equality and just what I experienced growing up in America as a kid really affected me to experience the Civil Rights Movement, and see people risking their lives, being beaten, being attacked by dogs, being fire hosed down streets, and they still took a non-violent and very brave approach to confronting bigotry.  It was remarkable and it certainly affected me in a very profound way.

alhumdulilah how lucky he is to have the guidance from Allah I wish that high profile personalities who are muslim would come to the forfront as dawah as I feel the youth need to see good examples before them. May Allah guides us all to his straight path Inshallah.