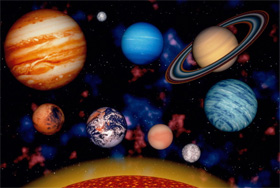 Hinduism is the third largest religion in the world.  There are approximately 950 million adherents, most of them in India or Nepal.  Central to Hindu worship is the image or icon, and central to Hindu belief is the concept of rebirth or reincarnation.  These two fundamental convictions in some ways make Hinduism and Islam polar opposites.

The most fundamental belief in Islam is the concept of One God.  He has no sons, daughters, associates or intermediaries.  He does not have partners or underlings; therefore, there are no demi gods or minor deities inherent in the concept of God.   He is not part of His creation and God is not in everybody and everything.  Praying to images, icons, statues, animals or stones is a grave sin.  Believing that someone or something other than God alone is able to affect your life or future is a grave sin.  Worshipping something or someone along with or instead of God and not sincerely repenting before death is considered to be the only unforgiveable sin in Islam.  The belief in more than one god is called polytheism and the pure monotheism of Islam is directly opposed to it.

Polytheism is the worship of many gods, demi gods or deities and in the modern world it is epitomised in the eastern religions, particularly Hinduism.  Hindus believe that everything is god or contains the energy of god therefore is worthy of worship, be it icons or symbols or nature itself.  The multiple heads or limbs often seen in Hindu iconography represent divine omniscience or omnipotence, and the use of animals represent qualities associated with that particular animal, such as wisdom, agility or power.  It is not difficult to see that the idol worship imbedded in all branches of Hinduism is very far away from the beliefs of Islam.

Hundreds of millions of people worldwide believe in reincarnation, or cyclic rebirths based on the transmigration of the human soul from one physical body to another.  One of the principle beliefs in Hinduism is that the soul reincarnates again and again until it becomes perfect and reunites with the source – Brahman.  The soul enters many bodies, assumes many forms, lives many lives and has many experiences.

Reincarnation is refuted by all the main Monotheistic religions of the world.  Reincarnation is against the basic teaching that the soul inhabits one human body, whose life is finite and upon which he or she will be judged, and punished or rewarded accordingly.  The religion of Islam unequivocally rejects the concept of reincarnation.

Until, when death approaches any of them, he prays: "O my God! Let me return [to life], so that I might act righteously in whatever I have failed [aforetime]!" Nay, it is indeed but a [meaningless] word that he utters: for behind those [who leave the world] there is a barrier [of death] until the Day when all will be raised from the dead! (Quran 23:99-100)

The words of God, in the Quran are clear.   When a person dies, he or she is unable to return to his or her old life. The soul stays in the grave and the person experiences torment or bliss based upon his/her beliefs and deeds until the Day of Judgment.  Islam teaches that the purpose of life is to worship God, no matter how short or long the life may be.  The soul is part of each unique created individual, it does not move from one body to another and it will never become part of God, who is separate from His creation.  The reasons why human beings are not sent to the world over and over again is also explained in the Quran,  when God says that if that were to happen they would just do the same things and commit the same sins.

"But if they were returned to the world, they would certainly revert to that which they were forbidden." (Quran 6:28)

Hinduwebsite[1]  explains the process of reincarnation in the following way.  ‘Hinduism speaks of the existence of heavens above and hells below.  The former are sun filled, inhabited by gods and innumerable divine souls.  The latter are dark worlds and populated by all the dark and demonic forces.  The individual souls go into these worlds according to their deeds.  But they do not stay there permanently till the end of destruction.  They go there basically as a consequence of their actions, either to enjoy or to suffer.  In either case they learn the lesson and come back to earth to start a new earthly life all over again.’

Islam, on the other hand states categorically that the soul cannot detach from a specially designed body and move on to another body, or upward and downward in a chain of worlds, heavens or hells.   For our life on this earth the soul and the body belong together, they cannot be mixed and matched.   There is only one soul belonging to one body that will be rewarded or punished on the Day of Judgement, to dwell forever in either Paradise or Hell.  This is in stark contrast to Hinduism where heaven and hell are temporary abodes and a soul regains freedom over and over until it reaches self realisation or oneness with the eternal life force.

There is nothing like unto Allah, and He is all-hearing, all-seeing. (Quran 42:11)