The Population of Muslims (part 2 of 2): Immigration and Conversion 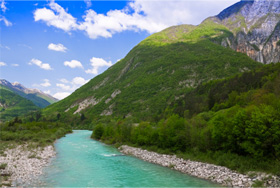 Islam is a global religion, and as we learned in the previous article it is no longer confined to those countries we think of as Arabic or Asian.  Close to 1.6 billion people across the globe identify as Muslim.  Growth projections paint a picture of unprecedented growth, faster than the world population growth.  2011 statistics tell us that 74.1% of the world’s Muslims live in the 49 countries in which Muslims make up a majority of the population.  More than a fifth of all Muslims (23.3%) live in non-Muslim-majority countries in the developing world, and about 3% of the world's Muslims live in more-developed regions, such as Europe, North America, and Australia.  Where in fact do these 3% of Muslims come from?

Immigration and conversion account for a large percentage of Muslims living in predominantly western countries.  Governments tend to keep strict immigration records however religious affiliation is not always recorded.  Conversion statistics are notoriously unreliable but do reveal that the number of people converting to Islam is also experiencing a high growth rate.  From across the globe and from various sources, both Muslim and non Muslim, government and nongovernmental, we have collected and collated statistical data in an effort to present a clear picture of how Muslim growth rates are proceeding into the second decade of the 21st century.

Let us begin in Australia.  According to the 2006 census, 1.7% of the Australian population identified with Islam, this represents a population growth of 20.9% on the 2001 count – only Hinduism (55.1%) and “no religion” (27.5%) had bigger percentage jumps in the same five-year period.  Where did this 20% growth rate come from? Apparently 36% were born in Australia, the majority claiming Lebanese, Turkish or broadly defined Arab ancestry.[1]  Other immigration source countries include the predominantly Muslim Iraq, Afghanistan, Pakistan, Indonesia and Bangladesh.  However, approximately two-fifths of Australia’s Muslims live in Melbourne, and originate from over 70 countries.[2]  There are no reliable statistics for conversions to Islam but mosques across Australia report that conversions take place frequently.

A report published in January 2011 by the Washington-based Pew Research centre[3]  suggests  Muslim numbers in Australia will increase by 80 percent, compared with 18 per cent for the population overall, growing from 399,000 at present to 714,000.  This is due first to higher reproduction rates - Muslim families typically have four or more children, while other Australians have one or two - and, second, to migration from Muslim majority countries such as mentioned above.

The estimates of how many Muslims live in Europe vary wildly, depending on where the statistics are from.  It is made even more difficult by the fact that they are the largest religious minority in Europe, and Islam is the fastest growing religion.  As would be expected Europe’s Muslim population are ethnically and linguistically diverse and Muslim immigrants in Europe hail from a variety of Middle Eastern, African, and Asian countries.  Converts are a tiny subset of the Muslim population, but their numbers are growing.  Studies in Germany and France have each estimated around 4,000 conversions a year in Europe or their respective countries.

In Germany, the estimated 4,000 converts each year[4], can be compared with an annual average of 300 in the late 1990s, still, less than 1 percent of Germany’s 3.3 million Muslims are converts.  A report by France’s domestic intelligence agency, published by Le Figaro, estimated last year[5]  that there were 30,000 to 50,000 converts in France.  The bulk of French Muslims are French citizens, and Islam is France’s second highest ranked religion.

Muslims are a minority in the United Kingdom, making up 2.7 per cent of the country's total population of some 60 million people.  The number of converts to Islam is, as expected very difficult to either predict or find hard data about.  One British newspaper however, the Independent, reports that the number of Britons converting to Islam has nearly doubled in the past decade, despite the fact that the UK has witnessed a rise in Islamophobia.  This is according to a comprehensive study by inter-faith think tank Faith Matters.

Previous estimates have placed the number of Muslim converts in the UK at between 14,000 and 25,000, but this study suggests that the real figure could be as high as 100,000, with as many as 5,000 new conversions each year.  By using data from the Scottish 2001 census - the only survey to ask respondents what their religion was at birth as well as at the time of the survey - researchers broke down what proportion of Muslim converts there were and then extrapolated the figures for Britain as a whole.[6]

In the United states of America, according to the Pew Research Centre, roughly two-thirds (65%) of adult Muslims living in the United States were born elsewhere, and 39% have come to the U.S.  since 1990.  A relatively large proportion of Muslim immigrants are from Arab countries, but many also come from Pakistan and other South Asian countries.  Among native-born Muslims, slightly more than half are African American (20% of U.S.  Muslims overall), many of whom are converts to Islam.[7]

As is the case in Europe and Australia, researchers say getting accurate estimates of converts to Islam is the most difficult challenge of all.  Data on conversion from another religion to Islam is virtually non-existent, and what estimates exist are based on conversion rates to other faiths that may not apply to the Muslim experience.

Statistics about converts to Islam are much easier to find in Arabian Gulf countries where Islamic Cultural Centres keep meticulous records.  For instance in Dubai, Huda Khalfan Al Kaabi, head of the New Muslims Section in the Islamic Affairs and Charitable Activities Department (IACAD) said, 1,365 people converted to Islam from January to June 2009 as compared to 878 over the same period in 2008.  Observing that 3,763 expatriates from 72 countries had converted to Islam in an 18 month period, Al Kaabi said most of them were from the Philippines, Russia, China and India.

Globalisation has contributed to the spread of Islam around the world, either by immigration or conversion.  Borders are more fluid than ever before and many people are able to make clear decisions about where they want to live and what religion they want to follow.  With or without hard statistical data it is possible to see clearly that across the globe people are converting to Islam in large numbers.  Islam is a global religion, no longer based on ethnicity or nationality.

[3] Pew Research Centre's Forum on Religion and Public Life, The Future of the Global Muslim Population: Projections for 2010-2030.  Using figures from the Australian Bureau of Statistics.

[4] A study financed by the Interior Ministry and carried out by the Soest-based Muslim institute Islam Archive Germany.  (2004-5)

Previous: The Population of Muslims (part 1 of 2): Statistics & Data

Since your last visit
This list is currently empty.
All by date
The Fine Tuning of the Universe
(Read more...)
The Month of Mercy
(Read more...)
VIEW MORE