The Population of Muslims (part 1 of 2): Statistics & Data 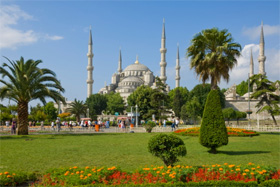 Islam today is a global religion.  It is no longer confined to Muslim majority countries such as Egypt, Saudi Arabia or Indonesia.  Small but significant communities exist across Europe, the Americas and Australasia.  For some time Muslims have been an invisible presence in the western world but one decade into the 21st century Muslims are no longer curiosities.  They are as much at home in London Paris or Chicago as they are in Istanbul, Damascus and Jakarta.

In 2011 Muslims in the West also no longer exist in immigrant communities but are second, third and fourth generation citizens participating in professional and civic life.  Islam is said to be the fastest growing religion in the United States.  It is estimated that more than 1 million Americans have converted to Islam.  In recent years due to an Islamic revival, believing and practicing Muslims have established a visible presence not only in Islamic societies but also in the West.

What do the latest data and statistics tell us about the number of Muslims in the world.  Where do they live? How many are born into the Muslim faith and how many choose to convert to Islam? The majority of the following statistics and data come from the Pew Research Centre.

According to the Pew[1]  Islam is growing about 2.9% per year.  This is faster than the total world population which increases about 2.3% annually.  The world’s Muslim population is expected to increase by about 35% in the next 20 years.  In mid 2010 the Pew forum estimated that there were 1.57 billion Muslims in the world.  This represents 22% of the world’s population.  Islam is the second largest religion in the world, beaten only by Christianity which represents 33% of the world’s population with a little over 2 billion adherents.

The Pew Forum on Religion & Public Life stated that Islam is the fastest-growing religion in Europe.  Driven by immigration and high birth rates, the number of Muslims on the continent has tripled in the last 30 years.  Most demographers forecast a similar or even higher rate of growth in the coming decades.

If current trends continue 79 countries will have a million or more Muslim inhabitants in 2030, up from 72 countries in 2011.  The seven new countries are expected to be Belgium, Canada, Congo, Djibouti, Guinea Bissau, Netherlands and Togo.  About 60% of the world’s Muslims will continue to live in the Asia-Pacific region, while about 20% will live in the Middle East and North Africa, as is the case in 2010.  One of the biggest changes expected is that Pakistan will almost certainly surpass Indonesia as the country with the single largest Muslim population.[2]

In 2011 statistics tell us that 74.1% of the world’s Muslims live in the 49 countries in which Muslims make up a majority of the population.  More than a fifth of all Muslims (23.3%) live in non-Muslim-majority countries in the developing world.  These minority Muslim populations are often quite large.  India, for example, has the third-largest population of Muslims worldwide.  China has more Muslims than Syria, while Russia is home to more Muslims than Jordan and Libya combined.[3]  About 3% of the world’s Muslims live in more-developed regions, such as Europe, North America, Australia, New Zealand and Japan.[4]

In the United States, the population projections show the number of Muslims more than doubling over the next two decades, rising from 2.6 million in 2010 to 6.2 million in 2030.  The number of Muslims in Canada is expected to nearly triple in the next 20 years, from about 940,000 in 2010 to nearly 2.7 million in 2030.  Muslims are expected to make up 6.6% of Canada’s total population in 2030, up from 2.8% today.  Argentina is expected to have the third-largest Muslim population in the Americas, after the U.S.  and Canada.  Argentina, with about 1 million Muslims in 2010, is now in second place, behind the U.S.

Finding statistics and data about the number of people converting to Islam from other religions or atheism can be difficult.  This is usually not a question asked by government authorities or research centers.  In the next article we will discuss Muslim growth rates across the globe due to conversion and immigration.

[1] The Pew Research Centre is an American think tank organization based in Washington, D.C.  that provides information on issues, attitudes and trends shaping the United States and the world.

Next: The Population of Muslims (part 2 of 2): Immigration and Conversion