Description: Natasa finds a purpose and direction in Islam after a life of emptiness. 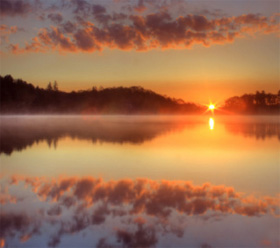 I converted to Islam two months ago and did not think it important to share my story, but in the past few days, I realized that I myself benefitted from other new Muslims’ stories, so why not let someone benefit from my journey to Islam? Inshallah (God-Willing) someone will read it and come to the truth as I have.

I came from a Catholic family from central Europe.  I don’t know if you have ever visited central Europe and seen the condition there?  Most of the people claim to be Protestants, Roman-Catholics, Orthodox Christians or some other sort of Christian. Islam is not popular or well known among people. I would to go to church and I learnt about the religion in school but I never really pondered over it. The only reason I was a Christian was because my parents were Christians.

It was only when I became 16 that I really began to think for myself and to question my faith. I no longer could take what was said to us “this is how it is, so accept it!” So often, would I go to church and listen to the sermons of the preacher and I remember that after Mass I would ask my mom so many questions. I must admit that many times the sermons were nice and the priest tried to give us direction in life but it felt as though I was a slave not having any will of my own. Do not understand me wrong, I know that people are not perfect and that they are in need of guidance; I just did not understand why a priest, as human as I, who was as prone to error as I, could yield so much authority.

At that time, I did respect priests and the Christian faith, for it is a religion with a very long tradition and indeed my whole family is catholic, but I felt it was not enough for me. It seemed to be a valueless object wrapped in a fancy cover. I apologize to any Christians who might feel hurt by this statement, I am just expressing my feelings. Christianity may be spiritually enriching for other people, but it wasn’t for me.

Going back to my story, I gradually began to distance myself from Catholicism. I stopped going to church, I stopped praying the Christian way; although, I kept having talks with God. My father was never a religious man, but he would take from different ideologies, religions and form his own opinion. So I started this search on my own, a search for the purpose of life and some principles that would be beneficial to me in the course of my life.

I believe that every person has an inner call towards something higher and more spiritual. As humans, we have been instilled with great intelligence as well as base desires that cause us to forget about more important things.  I had to go to the ‘other end of the world’ to find out that wealth was not as important as good friends and relationships that we have. I feel now that my life before was very empty and without any direction. When you go to a foreign country, you check the maps for some interesting places to visit, we rarely just go without knowing where we are headed. The same applies to our lives.  If our life is one big journey, we need to have guidance and we need to know what will await us at the end.

I am glad I felt like this because it made my heart open.  I was open to new opinions and ideas.  I wanted to try anything that seemed reasonable.  I went to India; I got to know Hinduism and Islam (mainly thanks to my Indonesian Muslim roommates who were so nice and open to any discussion about Islam).  But it was not until I had stayed one year in Indonesia that I finally found Islam.

I have to remind the reader that I come from Europe and the anti-Islamic propaganda also influenced me.  I respected my Muslim friends however I never wanted to be one of them.  I still had in mind stories of women who were treated in a very harsh way by their husbands, the terrorists that are so often portrayed in the media as Muslims, and I thought that the average Muslim could be so easily brainwashed that they could kill for their religion.  However I was open to learn and my awakening began during the month of Ramadan.  I lived with an Indonesian Muslim family, I took part in the fasting and I started learning so much about myself and I realized how important it is to be disciplined in order to achieve anything in our lives. I also realized how important it was not to be a slave of materialistic things. In fasting I had to control my mood and emotions which happened to be much harder than dealing with the feelings of hunger and thirst.  I started to look at the world from a different perspective. Suddenly materialistic things didn’t appear so important, what seemed important were the relationships between people, and treating others kindly and helping each other out.

This was the time when I felt awake.  I felt good and happy despite the fact that I was hungry and thirsty (A month before Ramadan I thought not drinking and eating was crazy!).  During this time, I began a soul searching for the true religion and it was at this point that I began to read the Bible.  In Christianity we don’t read the Bible.  I mean you read passages in church or in religious class but we never actually sit and read what is inside.  And the moment I started to read it I knew why we are not encouraged by priests to read it.  It is full of contradictions above my understanding.  I won’t go much into details because there have already been many stories about this and you can find the explanations anywhere on the internet (plenty of them have been published by scholars giving exact references to Bible or Quran for anybody who wishes to look into this).

However there was a moment when I decided to convert to Islam.  It was when I came across different statements of scientists which were supported by Quran.  I mean it was completely absurd to think that Muhammad,  may the mercy and blessings of God be upon him, could know these things himself, without any divine intervention.  He was an unlettered man! Science back then was even inaccurate, so it cannot be stated that the Prophet plagiarized what was in the Quran from the science of that day. If you believe that the world was created by someone it is not hard to accept the fact that there is only One God, One Creator and He revealed these things to his Messenger. Believing in God and his Messenger is Shahadah, the first pillar of Islam.

So after I realized this and I believed I knew I could not turn back.  If we are searching for something and we pray for it we cannot leave it once we find it.  I thank God for He opened my eyes and my heart to be able to find the right way and I hope many others will do so as well. Being a Muslim is challenging, but it perfects us. I slowly stopped fearing many things I feared before.  I put my trust in God. Since my conversion to Islam, I have become more disciplined; I worship my Creator in a state of complete harmony and peace. When looking at Islam, some may be prevented by the thought that they don’t want to be anyone’s slave. But ask yourself this, how many of us work from dawn to dusk just for the sake of money?  How many of us want to achieve something but never really find the time?  I am sure that I am not the only person who felt like this and Inshallah more people will find the right way and will be brave enough to live according to it.