Gather Blessings in the Mosques

Description: Why your heart should be attached to the mosque. 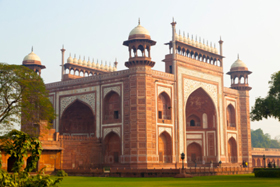 There are seven whom God will shade in His shade on the day on which there is no shade except His shade; a just imam, a youth who grows up worshipping God, a man whose heart is attached to the mosque when he leaves it until he returns to it, two who love each other for the sake of God and part on that, a man who remembers God when he is alone and his eyes overflow with tears, a man who refuses the approaches of a noble, beautiful woman, saying ‘I fear God,’ and a man who gives charity and conceals it so that his left hand does not know what his right hand gives.[1]

Is your heart attached to the mosque?  What do you think about when you see your local mosque?  What about when you see photos of mosques around the world?   How do you feel?  Are you reminded of beautiful architecture, towering minarets, and the melodic sound of the call to prayer?  Do you imagine lines of the faithful believers praying in comfortable companionship?  Can you hear the sounds of silence?

The mosque is all of those things, and feeling a special attachment should be easy.  It is a place of serenity occupied not only by people but also by angels.  The architecture ranges from Islamic classical to new state of the art designs.   Inside the mosque you might find columns, spiral staircases, plush carpets and Arabic calligraphy.  Outside there are domes and minarets, drinking fountains and shoe racks.  Mosques are as different as Muslims, they come in all shapes and sizes however in one way they are all exactly the same.  A mosque is a place in which Muslims worship God.

Muslim men are expected, under normal circumstances, to pray the five obligatory prayers in a mosque, and although women are also permitted to do this, it is not obligatory upon them.   It is in quiet, tranquil mosques that Muslims fulfill the right of God to be worshipped, but they can also gather rewards and good deeds for the hereafter.  Praying in the mosque and being attached to the mosque is a very pious and rewardable action.[2]

Prophet Muhammad, may the mercy and blessings of God be upon him, continually reminded his followers that God loves and rewards those who find repose and comfort in the mosques.

When a person goes to the mosques for prayer and the remembrance of God, God, the Most High, greets him joyfully, just as the family of one who is absent greets him with joy when he returns to them.  [3]

The mosque is the house of every pious person, and God has granted comfort and mercy for everyone for whom the mosque is his house, and that they will easily traverse the bridge to God’s Paradise.  [4]

There are six places in which a person is guaranteed the safekeeping of God, the Most High, as long as he is in one of them.   In a congregational mosque, with a sick person, at a funeral, in his house, with a just ruler  whom he supports and treats with respect, or at a place where people are fighting jihad.[5]

The comforting feeling that comes from pleasing God, and even more rewards, can be obtained by cleaning or building mosques.   Aisha, the beloved wife of Prophet Muhammad, said that her husband often reminded the people that God commanded that mosques be built among the houses and that they be kept clean and perfumed.[6]

Whoever builds a mosque seeking the pleasure of God, God builds a similar one for him in paradise.[7]

Whoever builds for the Mighty and Majestic God a mosque, even if it be very small, God builds for him a house in paradise.[8]

Once, while they were building a mosque, a companion of Prophet Muhammad noticed him carrying a heavy piece of mortar.  He offered to carry it but prophet Muhammad reminded him that there was no better living then in Paradise and suggested he carry his own piece of mortar for this noble cause.[9]

In the traditions of Prophet Muhammad we can find the story of a woman who cleaned and picked up rubbish in the mosque.  Prophet Muhammad did not learn of her death until he did not notice her, so he inquired about her.  He said to his companions, “If one of you dies inform me!”  He then prayed the funeral prayer for her and said, “I saw her in Paradise! She was rewarded for cleaning the mosque.”

Prophet Muhammad also reminded his followers that, “After the believer dies, he is followed by some of his work and good deeds including knowledge that he taught and spread, leaving a pious child (who would supplicate God for his father or mother), a Qur’an book he bequeathed, a mosque he built, a house he built for the wayfarer, a river he caused to flow, or charity extracted from his wealth during his life while in good health.”

Comfort, peace, tranquility, good companionship, angels and rewards can all be found in mosques and they are also among the best places on earth.  Prophet Muhammad said, the most beloved places to God are the mosques, and the most hated places are the markets.[10]

Mosques are special places filled with blessings and rewards, however, God has conferred a special blessing upon the nation of Muslims, the whole earth has been declared a mosque, so when the time for prayer comes and a believer is unable to pray in congregation in a building he may pray wherever he may be.[11]

The companion Abu Dharr asked Prophet Muhammad, “What was the first mosque on the earth?” He answered, “The Masjid al-Haram [in Makkah].” Abu Dharr then asked, “Which is the next oldest mosque?” The Prophet said, “The al-Aqsa Mosque.” Abu Dharr asked, “How much time was there between building the two mosques?” The Prophet replied, “Forty years.” Then he said, “Wherever you may be at the time of prayer you may pray, for it (the earth) is all a place for prayer.”[12]

[3] Ibn Majah, Ibn Khuzaimah and others.

[11] He unless otherwise stated always refers to both male and female.