Description: How to fully comprehend the existence of God. 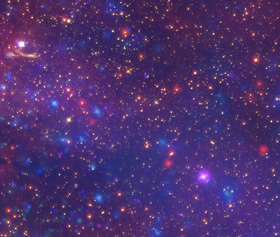 Why Islam?  The question “why?” demands a rational answer.  However, many people think that it is not possible to give rational answers to ideological commitments (by ideology, we mean a system of thought).  They believe that a commitment to any theistic ideology is an irrational act.  One cannot deny the fact that many people do commit themselves illogically to various ideologies and continue to hold onto them only because they find themselves to be raised up in particular communities.  They accept such ideologies in just the same way as they would accept a traditional form of dress handed down to them through the generations.  For example, a person might be deeply committed to a nationalistic ideology simply because it may be the best way to win the support of the masses and thereby gain personal political power.

·        The first states that a commitment to any ideology which involves some type of deity must necessarily be irrational.

The premise of those who say this is that the fundamental claims of all such ideologies are beyond the comprehension of the human mind.  Those who have accepted such a premise have concluded that all types of such ‘belief’ must be based on irrational and imaginary thoughts rather than on reality.

·        The opposite view is held by people who seek to justify their ‘belief’ in certain irrational ideas by claiming that reason is limited.

In fact, the followers of this ideology state that people should commit themselves to such ideas by simply having ‘faith’.  The conclusion of these people is that ultimate reality must be irrational in essence and therefore incomprehensible to the human mind.  They go on to say that their ideology must be accepted or ‘believed’ without reason, in order to attain some type of ‘salvation’.

This kind of argument is very difficult to accept because as human beings, we may ask: What do we have other than the usage of our minds for acquiring knowledge?  If we are told to ‘believe’ in something that is irrational (i.e.  beyond all reason), such as a type of being which is both mortal and immortal, we cannot possibly digest such an idea.  Therefore it does not seem unnatural for us to demand that our way of thinking and living be based solely upon those concepts which can be verified as being true.

Going back to the first view regarding ideological commitments, we see that this view contends that we cannot and should not believe in that which we cannot comprehend.  The emphasis lies on the word comprehend, and so it must be defined.  It is true that one cannot have an adequate mental picture of some mathematical and scientific facts.  For example, one cannot have an adequate mental or visual picture of the curvature of space, or one of the mathematical concepts of infinity.  Nor can we really have an adequate mental picture of the way in which certain animals experience things, such as the way in which bats ‘see’ by using ultrasonic waves.  However, we know these concepts to be true because of solid evidence and not because of some non-rational ideas.  Therefore we can say that we do indeed comprehend them.

Now what about the concept of a singular, all-knowing entity which has created the universe?  It is impossible to have any mental or visual picture of such an entity, for evidence tells us that this entity must be unlike anything in the universe because this entity must be independent of space and time.  The evidence for the existence of this single intelligence lies in the design of nature itself, which we can freely examine; hence, such an ideology is rational.  If one realizes this - through confirmation - then one can proceed to answer the question: Why Islam?

One of the main problems with an atheistic ideology is that it cannot explain intelligence in the processes of the universe.  Another problem is that it tends to deprive life of meaning.  Furthermore, we know that human beings are naturally inclined to be honest; however, in atheism there is a denial of an ultimate originator and of anything beyond death, which creates a contradiction and leads to an inconsistency in behaviour – on the one hand a person would be inclined to be honest, and on the other to be dishonest ‘to make the most of this world’.[1]

Broadly speaking, with regard to theistic ideologies we have the revealed, the distorted and the man-made.  One can easily say that a way of life communicated to humankind by the creator of this universe is preferred to man-made ideologies.  If one wants to follow the advice of that which has made the universe and all that it contains - regarding what is beneficial or harmful - then it is better to refer to pristine communication from this originator, than to that communication which has been fabricated or distorted by man.

Those ideologies claiming to be based on revelations can be subjected to a number of tests, the first and most important of which is that of consistency.  We must look for two types of consistency: internal and external.  Internal consistency means that a statement made in a book must not contradict another statement in the same book.  External consistency means that a statement made in a book must not contradict facts as we know, be they psychological, physical, chemical, historical, geographical, biological and so on.  Applying these tests, consider the most important truth that all the supposedly revealed ideologies proclaim, that is, the existence and perfect attributes of God.  God for all ideologies, that claim to be revealed, is supposed to be all knowing, all merciful, everlasting etc.  However, some books imply that God’s knowledge is limited and imperfect by saying that, for example, God was deceived by a human.  In contrast, the Quran provides the perfect concept of an all-knowing, singular originator of this universe.

This leads us to the next test - that of authenticity.  The question that should be asked is whether the scriptures that we have today are indeed a communication from the Creator to humankind.  A study of the history of Islam would show that the present Quran is exactly the same as that which was communicated over one thousand four hundred years ago.  During its revelation it was committed to memory by a large number of people and also written down.

Yet another test is that of comprehensiveness.  A truly comprehensive ideology, revealed to humankind by the designer of the universe, would describe the most beneficial system in all spheres of life including the political, economical, social, medical and environmental spheres.

Lastly, we might look at the test of universality.  Clearly, an ideology which is historically or graphically bound is not as good as that which applicable to all human beings, irrespective of the time and place of their origin.

In conclusion, if one uses the criteria of universality, comprehensiveness, authenticity and above all, consistency, one would find the Quran unique and worthy of investigation.  It is interesting to note that the Quran itself stresses the above-mentioned approach.  For example, in verse 82 of chapter 4, it is said, “Will they not ponder about the Quran?  If it had been from other than God, then they would have surely found in it many inconsistencies.”

In fact, i really enjoy your website. I have acquired a lot of knowledge and cannot afford to hide it. Thank you very much for that educative ideas. Keep it up and may ALLAH SUBHANA WATAALAA richly bless you.