The Basis of Islam

Description: A detailed explanation of the first part of the testimony of faith “None is rightfully worshipped except God (La ilaaha ‘ill-Allah).” 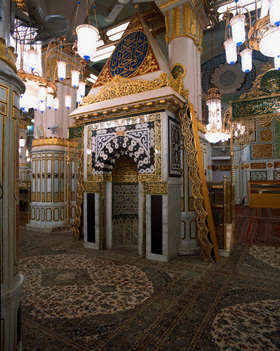 The basis of the religion of Islam is the attestation to two phrases:

(i)   None is rightfully worshipped except God (La ilaaha ‘ill-Allah), and

(ii)  Muhammad is the Messenger of God (Muhammad-ur-Rasool-ullah).

This phrase is known as the shahaadah, or testimony of faith.  Through the belief and attestation of these two phrases one enters the fold of Islam.  It is the motto of the believers which they maintain throughout life, and the basis for all their beliefs, worship and existence. This article will discuss the first part of this testimony.

The Importance of the Statement ‘Laa Ilaaha ill-Allah’

As mentioned earlier, this testimony is by far the most important aspect of the religion of Islam, as it asserts the belief in Tawheed, or the Oneness and uniqueness of God, upon which the whole religion is built.  For this reason, it is called, “The declaration of Tawheed”.  This uniqueness and oneness necessitates God’s sole right to worship and obedience.  The religion of Islam is basically a way of life in which a person worships and obeys the orders of God and none else.  It is the only true monotheistic religion, stressing that no worship should be directed to any other except God.  For this reason, we see that in many narrations, the Prophet, may the mercy and blessings of God be upon him, said that whoever says this phrase and practices it will enter Paradise for eternity, and whoever opposes it will doomed to Hellfire for eternity.

“And I have not created neither jinn nor humans, except to worship Me Alone.” (Quran 51:56)

The message of Tawheed found in this declaration is not particular to Islam.  Due to the importance, reality and truth of this message, it was the message brought by all prophets.  Since the dawn of humanity, God sent messengers to every people and nation, commanding them to worship Him Alone, and to reject all false deities.  God says:

“And indeed We have raised amongst every nation a messenger, (commanding them) ‘Worship God, and reject all false deities….” (Quran 16:36)

It is only when this notion of Tawheed is ingrained in the heart and minds of a person that they will willingly follow the commandments of God and render all worship to Him Alone.  For this reason, the Prophet called his people for thirteen years in Mecca to Tawheed alone, and only a minimal amount of worship was mandated at that time.  It was only when this notion became firm in the believers’ hearts and they were willing to sacrifice even their own lives for it that the majority of the other commandments of Islam were revealed.  If this base is missing, nothing after it will be of avail.

The Meaning of Laa Ilaaha ill-Allah

La ilaaha ill-Allah, literally means “There is no god (deity) except Allah”.  Here, god with a small case ‘g’ is anything which is worshipped.  What this declaration implies is that although there might be other gods and deities being worshipped by humans in existence, none of them are rightfully worshipped, meaning that no object considered as a god has any right to that worship, nor does it deserve it, except the One True God.  Thus, laa ilaaha ill-Allah means, “There is no god rightfully worshipped except Allah.”

La ilaaha… (There is no god rightfully worshipped…)

These two words deny the right of any created being to worship.  Muslims reject the worship of everything besides God.  This rejection extends to all superstitions, ideologies, ways of life, or any authority figures who claim divine devotion, love, or absolute obedience.  God in the Quran mentions in many places that all things which people take as objects of worship besides Himself do not deserve any worship, nor do they have any right to it, as they themselves are creations and have no power to bring any benefit.

“Yet they have taken besides Him other gods that created nothing but are themselves created, and possess neither [the power to] harm nor benefit for themselves, and possess no power [of causing] death, nor [of giving] life, nor of raising the dead.” (Quran 25:3)

Some worship another object or being because they believe that it has some special power, such as some control over the universe, some power to benefit or harm, or that it deserves worship in and of itself due to its greatness of being.  God negates the notion that these things which people take as objects of worship, whether they be aspects of nature, such as the wind, trees, stones, wind; or conscious beings, such as humans, prophets, saints, angels, kings, have any power in themselves.  They are mere creations like the worshippers themselves and have no power to help even their own selves, and thus they are not to be worshipped.  They are mere creations with deficiencies, subject to the Will of God, and thus they do not deserve any aspect of worship.

In reality, many believe in the ultimate control and power of God, but they imagine the Divine Kingdom of God to be like earthly kingdoms.  Just as a king has many ministers and trusted associates, they imagine ‘saints’ and minor deities to be our intercessors to God.  They take them as agents through whom God is approached, by directing some acts of worship and service to them.  God says:

“And verily, if you ask them: ‘Who created the heavens and the earth?’

In truth, there are no intercessors in Islam.  No righteous person is to be venerated, nor is any other being to be worshipped.  A Muslim directs all worship directly and exclusively to God.

After denying the right of any created being to be worshipped, the shahaadah affirms divinity for God alone, with ‘…except God’.  In many places in the Quran, after God negates that anything of the creation has power to bring benefit and harm, thus deserving no worship, He states that He Himself is to be worshipped, as He has control over and ownership of the whole universe.  It is God Alone who provides for his creation; He is in total control.  He is the only one who can bring benefit and harm, and nothing can impede His Will from becoming reality.  Thus it is He Himself, through His perfection, through His ultimate powers, due to his total ownership, and due to His greatness, who deserves all worship, service and veneration exclusively.

“Say: ‘Who is the Lord of the heavens and the earth?’

Say: ‘Have you then taken (for worship) deities other than Him, such as have no power either for benefit or for harm to themselves?’

Say: ‘Is the blind equal to the one who sees?  Or darkness equal to light?  Or do they assign to God partners who created the like of His creation, so that the creation [which they made and His creation] seemed alike to them?’

“Is not He Who created the heavens and the earth and sends down for you water (rain) from the sky, whereby We cause to grow wonderful gardens full of beauty and delight?  It is not in your ability to cause the growth of their trees.  Is there any ilaah (god) along with Allah?  Nay, but they are a people who ascribe equals (to Him)!” (Quran 27:60)

As God is the only being who is deserving of worship, anything worshipped besides or along with Him is done so wrongfully.  All acts of devotion are to be directed towards God alone.  All requirements should be sought through Him.  All fear of the unknown should be feared from Him, and all hope should be placed in Him.  All divine love should be felt for him, and all that one hates should be hated for His sake.  All deeds of good should be done to seek His favor and pleasure, and all wrong should be avoided for his sake.  In these ways do Muslims worship God alone, and from this, we understand how the whole religion of Islam is based upon this declaration of Tawheed.