The Journey into the Hereafter (part 8 of 8): Conclusion

Description: Some reasons for the existence of Paradise and Hell. 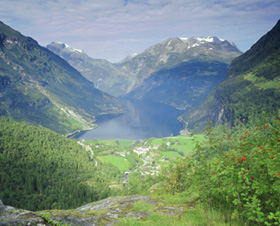 Muhammad, the Prophet of Islam, who passed away in 632, related:

Thus, it is from the great mercy and justice of God that he created Heaven and Hell.  Knowledge of the Hellfire serves to dissuade man from wrong-doing while a glimpse into the treasures of Paradise incites him towards good deeds and righteousness.  Those who deny their Lord, work evil and are unrepentant will enter Hell: a place of real pain and suffering.  While the reward for righteousness is the place of unimaginable physical beauty and perfection that is His Paradise.

Often, people testify to the goodness of their own souls by claiming that any good they do is purely and solely out of a genuine love of God or to live by a universal moral and virtuous code, and for that, they do not need any sticks or carrots.  But when God speaks to man in the Quran, He does so knowing the fickleness of his soul.  The delights of Paradise are real, physical, tangible delights.  Man can begin to appreciate just how desirable the perfect, abundant and unending food, clothing and homes of Paradise can be precisely because he is aware of how satisfying and sweet those things can be in this present reality.

"Beautified for men is the love of things they covet: women, children, hoards of gold and silver, branded beautiful horses, cattle and well-tilled land.  Such is the pleasure of the present life; but with Allah is the excellent return (to Paradise)." (Quran 3:14)

Likewise, man can begin to appreciate just how tortuous and terrifying Hellfire and its furnishings could be precisely because he is aware of how awful a burning by fire can be in this world.  So, the journey of the soul after death, as described to us in vivid detail by God and His Prophet, Muhammad, may the mercy and blessings of God be upon him, should and must serve as nothing but an incentive to what all of humanity surely and truly recognizes as its noble purpose: the worship and service of its Creator in selfless love, awe and gratitude.  After all,

"…they were not commanded except that they should worship Allah (alone), being sincere to the upright religion (of Islam)." (Quran 98:5)

But, as for those many multitudes amongst mankind who, throughout the ages, neglect their moral duty to their Lord God and their fellow man, let then not forget that:

"Every soul will taste death, and you will only be given your [full] compensation on the Day of Resurrection.  So whoever is drawn away from the Fire and admitted to Paradise, it is indeed he who has succeeded.  And what is the life of this world except the enjoyment of delusion." (Quran 3:185)

Previous: The Journey into the Hereafter (part 7 of 8): The Unbeliever and Hell

The materials presented in this website are so heart-touching that if anybody goes through it in a open mind insha_Allah he is sure to get the right path. May Allah bless you all for this excellent webpage.

Thank you for your excellent work. May Allah reward you for your work. Let's us be on the rigth path and enter paradise. Insha Allah

Assalamualaikum, Although i m a born Muslim, this website is really great. I enjoy reading the articles- everyone of them. waalaikumsalam.

Mashallah this website is the best of the bests and whom ever made this website well surely be rewarded by Allah......may Allah enlighten us all and make us all into believers!!!!

MasaAllah! this is a very touching article, it deeply touches my heart and mind. May the Great Allah bless the author for conveying the meaning of qur'an clearly to those non-arab speaking individual like me.

Assalamoualikum, I hav just lost my husband at the age of 33 last week and i find your information very interesting. Its also reassuring when i read about all the benefits that there are in janaat. Right-now i am facing a very hard and tough time but Allah is giving me Sabr.

Allahou Akbar! May Allah forgive us and guide us. May we earn Heaven and never to come across hell.Amen

As-salam Malaikum, peace be onto all believers. I pray our Generous and Merciful Lord forgives us all and admits us into paradise and grants us an easy reckoning. Laa-illaha illalah. Allahu Akbar.

Always fascinating to read about the Hereafter. Excellent article keeps me close to Allah and the Deen. I know who my Lord is, my religion, my Prophet (saw) and how I know these things. Ameen.