Out of Egypt: The Story of Passover in the Quran

Description: In the Quran, one of the most recounted stories is the story of the bondage of the Children of Israel and their deliverance from Egypt’s Pharaoh. 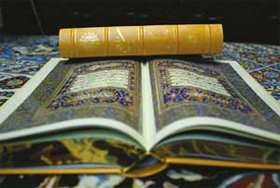 Many Jews may be surprised to learn that Islam as preached by Muhammad, may the mercy and blessings of God be upon him, was the same religion preached by Abraham, as well as of all other prophets mentioned in the Torah and the Bible.  Muslims honor all the prophets of the Jews – Abraham, Jacob, Joseph, Moses, David and Solomon among others – as their own prophets and believe that they all preached on message, that is the belief in the Oneness of God.

Here is how God ordered Muhammad to uphold the belief in the Oneness of God, which was upheld by Prophet Abraham:

“Then We revealed to you, [O Muhammad], to follow the religion of Abraham, inclining toward truth; and he was not of those who associate with Allah. .” (Quran 16:123)

It is particularly noteworthy that in the Quran, there is no story that is recounted as many times and with as much emphasis, as the story of the bondage of the Children of Israel and their subsequent deliverance from Egypt’s Pharaoh.  The Quran quotes Moses as saying to his people:

“O my people!  Remember the blessings which God bestowed upon you when he raised up prophets among you, and made you your own masters, and granted unto you favors such as He had not granted to anyone else in the world.” (Quran 5:20)

It was Moses, with the help and guidance of God Almighty, who led them out of Egypt towards a land of promise.  God in the Quran says what means:

“O children of Israel! Remember those blessings of Mine with which I graced you, and how I favored you above all other people.  And guard yourselves against a day when no soul will in aught avail another, nor will intercession be accepted from it, nor will compensation be received from it, nor will they be helped.  And remember the time when We saved you from Pharaoh’s people, who afflicted you with cruel suffering, slaughtering your sons and sparing only your women — which was an awesome trial from your Sustainer; and when We cleft the sea before you, and thus saved you and caused Pharaoh’s people to drown before your very eyes.” (Quran 2:47-50)

The story is narrated elsewhere in the Quran, where we may read these verses:

“And We took the Children of Israel across the sea, and Pharaoh and his soldiers pursued them in tyranny and enmity until, when drowning overtook him, he said, "I believe that there is no deity except that in whom the Children of Israel believe, and I am of the Muslims." Now? And you had disobeyed [Him] before and were of the corrupters? So today We will save you in body that you may be to those who succeed you a sign. And indeed, many among the people, of Our signs, are heedless. And We had certainty settled the Children of Israel in an agreeable settlement and provided them with good things. And they did not differ until [after] knowledge had come to them. Indeed, your Lord will judge between them on the Day of Resurrection concerning that over which they used to differ” (Quran 10:90-93)

But he was arrogant and refused to free the Jews, until the last of the plagues God sent as punishment.

Under guidance from God, the Israelites fled Egypt; while the Pharaoh and his men pursued them.  It seemed like their journey would end at the Red Sea which prevented their escape.

But a miracle happened when Moses struck the water with his staff: The waves of the Red Sea parted and the Israelites hurried along the passage between the parted waves.  Pharaoh and his soldiers followed; but by the time the Israelites reached the other shore, the sea closed in engulfing their pursuers.  Thus the Israelites were delivered from bondage, and the Pharaoh and his people perished.

When the Prophet Muhammad came to Madinah on the tenth of the lunar month of Muharram, he found that the Jews there were fasting.

“The Prophet asked them why they were fasting on this day, and they explained that it was the day that God saved the Children of Israel from the Pharaoh, and that Moses fasted in thanks on this day.  The Prophet said, “We have more claim to Moses than you.” He fasted on that day and commanded Muslims to fast on the day.” (Saheeh Al-Bukhari)