The Rights of Non-Muslims in Islam (part 5 of 13): The Right to Freedom of Belief I

Description: Islam gives members of other faiths the right to practice their faiths.  A historical analysis of Islamic principle of ‘No compulsion in religion.’ 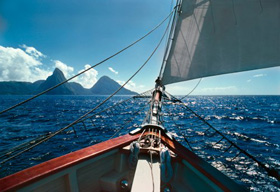 Islam does not compel people of other faiths to convert.  It has given them complete freedom to retain their own faith and not to be forced to embrace Islam.  This freedom is documented in both the Quran and the prophetic teachings known as Sunnah.  God addresses the Prophet Muhammad in the Quran:

"If it had been your Lord’s will, they would all have believed – all of who are on earth!  Will you then compel humankind, against their will, to believe?" (Quran 10:99)

Prophet Muhammad, may the mercy and blessings of God be upon him, would give people a choice between entering Islam and retaining their religion.  He would ask them to accept Islam only after making an agreement with them, once they had become residents in the Islamic state and felt secure about their personal safety and property.  This allowed them to appreciate the security of the covenant with God and His Prophet.  It is precisely for this reason that the non-Muslim citizens are referred to as dhimmis.[1]  When the Prophet of God sent a commander of an army or a battalion off to war, the Prophet would command him to be conscious of God in his conduct and to treat his Muslim companions well.  Then the Prophet of Mercy would instruct him:

"Set out for battle for the sake of God and fight those who disbelieve in Him.  Go into battle, but do not go to extremes, behave treacherously, mutilate their dead, or kill children.  When you meet your enemies, the unbelievers, offer them three options, and accept any one of them to which they agree and cease the battle:

(a)  Invite them to join Islam.  If they agree, then accept this and cease the battle.  Then invite them to move from their lands to the Land of the Immigrants (Medina), and inform them that if they do so, they will have the same privileges and obligations as the other migrants.  If they refuse to migrate from their lands, inform them that they will have the same status as the nomadic Muslims: that they will be subject to the Law of God which applies to all Muslims, and that they do not have a share in wealth obtained from conquest, unless they participate in the jihad with the Muslims.

(b)  If they refuse, then ask them to pay the jizyah,[2]  and if they agree, then accept it from them and cease the battle.

These directives of the Prophet were in obedience to what God says in the Quran:

"Let there be no compulsion in religion; truth stands clear from error: whoever rejects false gods and believes in God has grasped the most trustworthy hand-hold that never breaks.  And God hears and knows all things." (Quran 2:256)

Edwin Calgary, an American scholar, wrote about this verse, ‘There is a verse in the Quran that is filled with truth and wisdom, and it is known to all Muslims.  Everyone else should know it as well; it is the one that says there is no compulsion in religion.’[4]

This verse was revealed concerning some of the residents of Medina.  When none of the children of the pagan women of Medina survived infancy, they would make a vow to make the child a Jew or a Christian if he lived.  When Islam came to Medina, they had adult children who were Jewish or Christian.  The parents tried to compel them to embrace the new religion, so this verse was revealed to prevent them from doing so.  The verse and the history of its revelation reveals that it is not permissible to force anyone to become a Muslim.  This is the case even if it is the parent who wants the best for their offspring, and their children become members of another religion.  The Quran rejects forcing anyone to join Islam.[5]  God says in the Quran:

"Say, ‘The truth is from your Lord,’ let him who will, believe and let him who will, reject, it.  For the wrongdoers We have prepared a Fire whose (smoke and flames are) like the wall and roof of a tent, will hem them in: if they implore relief they will be granted water like molten brass that will scald their faces.  How dreadful the drink!  How uncomfortable a couch to recline on!" (Quran 18:29)

Not only does Islam give the freedom of religious freedom to non-Muslims, its tolerant law extends to the preservation of their places of worship.[6]  God says in the Quran:

"(They are) those who have been evicted from their homes without right — only because they say, ‘Our Lord is God.’  And was it not that God checks the people, some by means of others, there would have been demolished  monasteries, churches, synagogues, and mosques in which the name of God is much mentioned (praised).  And God will surely support those who support Him (meaning His cause).  Indeed, God is Powerful and Exalted in Might." (Quran 22:40)

The Muslim caliphs used to order their military leaders who went on military campaigns to take steps to guarantee this matter.  The first example is the command of Abu Bakr to Usamah ibn Zayd:

‘I command you to do ten things: kill no woman, no child, nor an elderly person; do not cut down fruit trees, or vandalize homes, or wound a sheep or camel except if you must eat it; do not drown a palm tree, or burn it, do not be treacherous; do not be cowardly; and you will pass by people who have devoted themselves to monastery life; leave them alone to their devotions.’[7]

The second example is the treaty of Umar ibn al-Khattab with the people of Iliya of Jerusalem:

‘This is the security given by the slave of God, Umar, the Commander of the Faithful, to the people of Iliya: they are guaranteed the security if their persons, possessions, churches, crucifixes, and everyone within, whether sick or in good health, as well as everyone in their community.  Their churches will not be occupied or demolished, nor will anything be taken from them: neither furnishings nor crucifixes or money.  They will not be forced away from their religion, or harmed because of it.  They will not be occupied by the Jewish settlers in Iliya.’[8]

As a result, since the era of the rightly-guided caliphs, Jews and Christians have held their services in freedom and security.[9]

[2] Jizya: a protection tax payable by non-Muslims as a tribute to the Muslim ruler.