The Rights of Non-Muslims in Islam (part 3 of 13): Right to Preservation of Dignity as Human Beings I

Description: The right of non-Muslims to preservation of their human dignity with discussion of historical precedents and textual evidence. 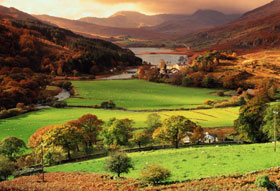 God has created human beings with certain dignity, Muslims and non-Muslims alike, and has elevated their status above much of His creation.  God says in the Quran:

"We have honored the children of Adam; provided them with transport on land and sea; given them for sustenance things good and pure; and conferred on them special favors, above a great part of Our creation." (Quran 17:70)

As a token of honor and to elevate his status, God commanded the angels to prostrate out of humility before Adam, the father of humanity.  God informs us in the Quran:

"When We said to the angels, ‘Prostrate yourselves to Adam,’ they prostrated themselves, but not Satan; he refused." (Quran 20:116)

God bestowed many favors on humanity, some of which are obvious, while others are hidden.  For instance, He subjected the heavens and earth to human beings to honor them.  He says:

"It is God who created the heavens and earth and sends down rain from the sky, and with it brings out fruits therewith to feed you; it is He Who has made the ships subject to you, that they may sail through the sea by His command; and the rivers (also) He has made subject to you.  And He gives you of all that you ask for, but if you count the favors of God, never will you be able to count them.  Surely, man is given up to injustice and ingratitude." (Quran 14:32-34)

The God-given status of humanity forms the basis of the principle of human dignity in Islam, whether the person is Muslim or non-Muslim.  Islam emphasizes the origin of all humanity is one; therefore all human beings have certain rights over one another.  God says:

"O mankind!  We created you from a single (pair) of a male and female, and made you into nations and tribes, that you may know each other (and not hate one another).  Surely, the most honored of you in the sight of God is (he who) is the most righteous of you.  And God has full knowledge and is well acquainted (with all things)." (Quran 49:13)

The Messenger of God declared in his farewell sermon, addressing the largest gathering in Arab history till that point:

An example of the preservation of the human dignity of non-Muslims is the right that their feelings be respected, for example, that they are shown good manners in speech and debate in obedience to the divine command:

"And dispute you not with the People of the Scripture, except in the best way, unless it be with those who do wrong, but say, ‘We believe in the revelation which has come down to us and in that which came down to you; our God and your God is One; and it is to Him we submit (in Islam).’" (Quran 21:46)

Non-Muslims have the right not to have their religious beliefs mocked.  It may not be an exaggeration to state that no other religion or sect in the world is as fair as Islam to people of other faiths.  For example, let us look at a verse from the Quran:

"Say, ‘Who gives you sustenance from the heavens and the earth?’  Say, ‘It is God; and it is certain that either we or you are on the right guidance or in manifest error.’" (Quran 34:24)

The verse ends with what Arabs linguists call a rhetorical question whose answer is common knowledge to the intended audience.  The verse blends certainty with doubt: Muslims following guidance and the error of the unbelievers is presented as something doubtful.  In doing so, God emphasizes the truth by allowing the reader to draw his own conclusion.  God does not state in this verse who is following guidance and who is not.  The verse treats the fictitious "opponent" with justice by presenting the argument and allowing the listener to judge.  Az-Zamakhshiri, a classical linguist and exegete of the Quran, elaborates this point:

‘This is equitable speech: whoever hears it, supporter or opponent, will tell the person to whom the speech is directed that the speaker has treated him justly.  It draws the listener to the inevitable conclusion, after the argument has been presented, that there is no doubt about who is following guidance and who is in error.  Suggestion of the facts, as if the question were a conundrum, provides a more cogent proof of the truth, the opponent being gently disarmed, without resort to heated quarrelling.’[2]

An example of the style employed by the Quran would be someone saying in a debate, ‘God knows who is telling the truth and who is a liar.’[3]

God has also forbidden Muslims from speaking ill of the gods and deities worshipped by non-Muslims so that they do not speak ill of the One, True God.  It will be difficult to find a similar example in any scripture of the major world religions.  If the polytheists were to hear Muslims speak ill of their gods, it might lead them to speak ill of Allah (the personal and proper Name of God).  Also, if Muslims were to speak ill of pagan gods, it might instigate the polytheists to soothe their wounded feelings by hurting the feelings of Muslims.  Such a scenario is against human dignity of both sides and would lead to mutual rejection and hatred.  God says in the Quran:

"Do not revile those whom they call upon besides God, lest they revile God out of spite in their ignorance.  Thus, We have made alluring to each people its own doings.  In the end will they return to their Lord and He shall then tell them the truth of what they did." (Quran 6:108)