Accepting Islam (part 1 of 2): A religion for all people, in all places 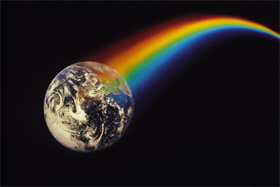 Many people throughout the world today are searching for the truth; they search for meaning in their lives, and wonder what life is all about.  Men and women ask the question, why am I here?  In the midst of suffering and pain, humankind calls out silently or loudly asking for relief, or understanding.  In the midst of pleasure often, a person seeks to understand the source of such elation.  Sometimes people contemplate accepting Islam as their true religion but find some obstacles.

In life’s most joyous moments or darkest hours, a person’s most instinctive reaction is to reach out for a connection to some sort of Supreme Being, to God.  Even those who would consider themselves atheists or non-believers have at some stage in their lives experienced that innate sense of being part of a grand plan.

The religion of Islam is based on one core belief, that there is One God.  He alone is the Sustainer and Creator of the Universe.  He is without partners, children, or associates.  He is the Most Merciful, the Most Wise, and the Most Just.  He is the all Hearer, all Seer, and the All Knowing.  He is the First, He is the Last.

It is comforting to think that our trials, tribulations, and triumphs in this life are not random acts of a cruel unorganised universe.  Belief in God, belief in One God, the Creator, and Sustainer of all that exists is a fundamental right.  Knowing with certainty that our existence is part of a well-ordered world and that life is unfolding as it should is a concept that brings serenity and peace.

Islam is a religion that looks at life and says this world is but a transient place and our reason for being is to worship God.  Sounds simple doesn’t it?  God is One, acknowledge this and worship Him and peace and serenity are obtainable.  This is within the grasp of any human being and can be had simply by believing sincerely that there is no god but God.

Sadly in this brave new century, we continue to push the boundaries and rediscover the world in all its glory but have forgotten the Creator, and forgotten that life really was meant to be easy.  Finding our connection to God and establishing a relationship with Him is paramount if we are to live peacefully and throw off the shackles binding us to pain, psychological turmoil and sadness.

Islam was revealed for all people, in all places and at all times.  It was not revealed for men or for a particular race or ethnicity.  It is a complete way of life based on the teachings found in the Quran and the authentic traditions of Prophet Muhammad.  Once again, sounds simple doesn’t it?  Guidance revealed by the Creator to His creation.  It is a foolproof plan to achieve everlasting happiness in both this life and the next.

The Quran and the authentic traditions explain the concept of God and give details of what is permissible and what is forbidden.  They explain the basics of good manners and morals, and give rulings about worship.  They tell stories about the Prophets and our righteous predecessors, and describe Paradise and Hell.  This guidance was revealed for all of humankind, and God Himself says that He does not want to place humankind in difficulty.

“God does not want to place you in difficulty, but He wants to purify you, and to complete His Favour to you that you may be thankful.” (Quran 5:6)

When we reach out to God, He listens and responds and the truth that is Islam, pure monotheism, is revealed.  This all sounds simple, and should be uncomplicated, but sadly, we, humankind, have a way of making things difficult.  We are stubborn yet God continuously leaves the path clear for us.

Accepting Islam as the one true religion should be simple.  There is no god but God.  What could be clearer than that statement?  Nothing is less complicated, but sometimes considering the prospect of redefining out belief system can be scary and fraught with obstacles.  When a person is considering Islam as their religion of choice they are often overcome by reasons for not accepting what their hearts are telling them is the truth.

Currently, the truth of Islam has become blurred by what appears to be a set of rules and regulations that seem almost impossible to fulfil.  Muslims do not drink alcohol, Muslims do not eat pork, Muslim women must wear scarves, Muslims must pray five times every day.  Men and women find themselves saying things like, “I could not possibly stop drinking”, or “I would find it too difficult to pray every single day let alone five times”.

The reality however is that once a person has accepted that there is no god but God and developed a relationship with Him the rules and regulations drift into insignificance.  It is a slow process of wanting to please God.  For some accepting the guidelines for a happy life is a matter of days, even hours, for others it can be weeks, months, or even years.  Every person’s journey into Islam is different.  Every person is unique and every person’s connection to God comes about via a unique set of circumstances.  One journey is not more correct than another.

Many people believe that their sins are too big and too frequent for God to ever forgive them.  They hesitate to accept what they know is the truth because they fear they will not be able to control themselves and give up committing sins or crimes.  Islam however is the religion of forgiveness and God loves to forgive.  Although the sins of humankind may reach the clouds in the sky, God will forgive and go on forgiving until the Final Hour is almost upon us.

If a person truly believes that there is no god but God, he or she should accept Islam without delay.  Even if they believe they will continue to sin, or if there are some aspects of Islam they do not fully understand.  Belief in one God is the most fundamental belief in Islam and once a person establishes a connection with God changes will occur in their lives; changes they would not have believed possible.

In the following article we will learn that there is only one unforgiveable sin and that God is the Most Merciful, oft Forgiving.

Next: Accepting Islam (part 2 of 2): The Religion of Forgiveness

This article is so simple and easy to understand. I am a non Muslim but reading this article helps me to understand the core principles of the beautiful religion of Islam.

Really want to be come a muslim