What Islam Says About Children (part 5 of 5): Custody & Fairness

Description: Rights are embedded in all issues involving children. 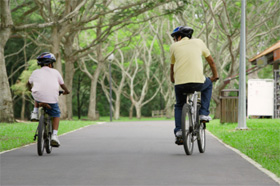 In the previous four articles, we discussed what Islam says about children, particularly in relation to children’s rights.  In this final article, we will talk about some issues concerning children that do not, at first glance, appear to be about the rights of children. The issues are custody, gift giving and fairness among siblings.  We will discover that the rights of children and their best interests are embedded into all issues pertaining to children.

The main issue in custody disputes is what is in the best interest of the child.  Ibn Qudaamah al-Maqdisi, Islamic scholar of the 12th century said , “Custody is aimed at looking after the child, so it should not be given in a way that will be detrimental to his welfare and his religious commitment.”[1]

If a marriage ends and there is a dispute about who should have custody of the children or who should financially support them; then the solutions can be found within the teachings of Islam.  Until the child reaches the age of discernment, the mother is more entitled to custody than the father, unless the mother remarries, in this case the custody belongs to the father.  That is unless he agrees with the mother on something that is better for their child.  Muslim scholars over the centuries have differed in their views regarding child custody; however, they have all agreed that the child's best interests must be the primary concern.

A divorced woman whose ex-husband was claiming custody of their child went to Prophet Muhammad, may the mercy and blessings of God be upon him, and said, “My womb was a vessel for this son of mine, and my breasts gave him to drink, and my lap was a refuge for him, but his father has divorced me and he wants to take him away from me.  Prophet Muhammad said to her, “You have more right to him so long as you do not remarry.”[2]

According to Islam the period of discernment is around the age of seven or eight, at which time the official period of custody ends and the period of kafalah or sponsorship begins. This period lasts until the child reaches puberty at which time the child is free to choose with which parent he or she will reside with.  The choice however is dictated by the need for certain conditions to be fulfilled.

These conditions include that the parent or guardian is a Muslim who is able to be held accountable (i.e., an adult of sound mind etc.) is of good character and is able to fulfill all obligations towards the child.

Maintenance however is obligatory upon the father whether the mother is rich or poor.  He is responsible for accommodation, food, drink, clothing and education, and other everyday needs.  However, the monetary amount is based on the father’s circumstances and means.  Every situation is different.

Islam tells us that it is important to treat children fairly. Prophet Muhammad, may the mercy and blessings of God be upon him, said, “Fear God and treat your children fairly.”[3]

In relation to spending this means giving each child what he or she needs.  For instance, one child may need a school uniform worth $200 while another child’s uniform may only cost $100. Another example would be if one child is getting married and the parents have arranged it, they should do the same for other children when they desire to get married..

It is not permissible to show preference to one gender over the other or to one child over the others.  This can lead to sibling rivalry, jealousy, and bad feelings within the family.  In extreme cases, it may even lead to the breaking of family ties.

Some of the scholars are of the opinion that it is permissible to show preference to some children in regards to gift giving under certain specific circumstances.  For instance,  it may be permissible if  one of them is disabled or has a large family or is preoccupied with seeking knowledge or if there is some other reason that means he or she is in need of extra financial aid.  It may also be permissible to withhold gifts or money from your children if they are engaged in forbidden actions.[4]

Sheikh IbnUthamien, noted Islamic scholar of the 20th century said, “If a parent granted one of his children financial remuneration to fulfill a necessity, such as a medical treatment coverage, the cost of a marriage, the cost of initializing a business, etc., then such a grant would not be categorized an act of injustice and unfairness.  Such a gift will fall under the right to spend in the essential needs of the children, which is a requirement that a parent must fulfill.

Islam is a religion concerned with justice and respect.  It is a religion that places great emphasis on rights and responsibilities.  It is a religion concerned with individual needs only as far as they do not impinge on the needs of a cohesive community.  Children have certain rights, the most important being that they are able to know and love God.  It is the parents (caregivers and guardians) responsibility to feed, clothe, educate, and nurture the children that have come under their care.

Previous: What Islam Says About Children (part 4 of 5): Nurture, Love, and Education

Masha'Allah and I want to be part of the team