Description: The context of Jesus’ second coming, the trials and tribulations before it, the rise of the Mahdi and the advent of Maseeh ad-Dajjal (the False Messiah), and Jesus’ role killing him.

The Rise of the Mahdi, and Advent of the False Messiah

The circumstances of the second coming will involve two other people from the end times, the Mahdi[1]  and the Maseeh ad-Dajjal, Arabic for the False Messiah, and the trials and tribulations associated with them.  The primary task of Jesus on his return will be to save the world from the False Messiah and unite it once more under the Rule of God.

The advent of the False Messiah, however, will be preceded by a man who unites all Muslims under his leadership.  Of this man, the Prophet, may the mercy and blessings of God be upon him, said that before the world ends, a person from his family with his name (Muhammad ibn Abdullah) will rule the Arabs, filling the earth with equity and justice where before there had been oppression and injustice, for 7 years.[2]  He further said that he will be supported by the Muslim nation, of whom it was said:

"A group of my people will not cease fighting for the Truth and will prevail till the Day of Resurrection.  And Jesus son of Mary will descend and their (the Muslims’) leader will say, ‘Come and lead us in Prayer.’" (Saheeh Muslim)

Thus, before the coming of Jesus, the Muslim nation will defend the religion under a man directly descended from the prophet, who will invite Jesus to lead the prayer interrupted by his coming.  How long he will have been leading the Muslim Nation will be less than 7 years, but how much less is not known exactly.  What is known is that he will be a reluctant commander whom people will flock to, only after an army attacking Mecca is swallowed up by the earth.

"There will also be several campaigns, the first against internal elements[5], and then against external elements.  An army consisting of the best Muslim soldiers in the world will come from Medina to counteract the western invasion of Ash-Sham[6]."

"When they arrange themselves in ranks, the Romans will say: ‘Do not stand between us and those who took prisoners from amongst us.  Let us fight with them.’  The Muslims will say: ‘No, by God, we will never stand aside for you or our brethren so that you can fight them.’" (Saheeh Muslim) 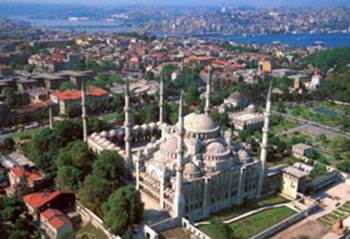 The fight would last three days with great slaughter on all sides until, on the fourth day, the remnants of the Muslim Army will defeat the Western forces and go on to conquer Istanbul.  While the soldiers are looting the city a false rumor that the False Messiah had arrived will reach them, so they will make for Syria again.  By the time they reach Damascus, where the Mahdi will prepare them for war against the False Messiah’s coming, the False Messiah will truly appear.

His stay on earth will be 40 days. However, these 40 days will have something special about them.  The first day and night will last a full year, the second a full month, and the third a full week, and the remaining 37 days would be normal.[7]  It is in these final 37 days that Jesus will probably come, since he will kill the False Messiah shortly after his arrival.

The False Messiah will appear out of the east, on the way between Syria and Iraq[8], and his coming will spread great troubles and injustice right and left.  He will range far and wide, like a wind driven cloud, coming to first one people and then another.  He will invite people to follow him, rewarding the ones who respond and affirm their faith in him by commanding the sky to rain, which will cause the land and domestic animals to flourish and produce.  Those who refuse him will suffer drought, famine, and loss of wealth.  Wherever he goes, he will call forth the land’s treasures, which will gather before him like swarming bees, and he will even kill a man, cutting him in half and then bring him back to life.

The Coming of Jesus and Death of the False Messiah

As can be seen, the False Messiah will have been given miracles to convince people to stray from the path, and many will follow him.  Some hadeeths mention that many people, especially the Jews[9], will take him for the real Messiah, as he will announce himself to be God’s representative.  However, he will soon claim divine power himself, and eventually claim to be the Lord.[10]  He will conquer most of the world and go against the Mahdi in Damascus, and this will be the time the true Messiah, Jesus, will descend.

"God will send the Messiah, son of Mary, who will descend at the white minaret on the eastern side of Damascus wearing two garments, lightly dyed with saffron, his hands resting on the wings of two Angels.  When he lowers his head, beads of perspiration will fall from it, and when he raises it up, beads like pearls will scatter from it.  Every non-believer who smells him will die, and his breath will reach as far as he is able to see." (Saheeh Muslim)

In another hadeeth it says,

"Certainly, the time of prayer shall come, and then Jesus, the son of Mary, will descend and will lead them in prayer.  When sees he him, the enemy of God will [begin to] dissolve just as salt does in water." (Saheeh Muslim)

The first hadeeth continues to say that he will meet him at Lydda:

"He (Jesus) will pursue the False Messiah until he captures him at the gates of Lydda and kills him." (Saheeh Muslim)

Jesus will use a spear guided by God in this killing,[11]  by which the forces of temptation will be vanquished.

"Then, a people whom God had protected will come to Jesus, son of Mary, and he will wipe their faces and inform them of their ranks in Paradise." (Saheeh Muslim)

This information is not the Judgment of Judgment Day, but knowledge given to Jesus by God.  These people are not the elect of the Christian rapture, but the survivors of the turmoil surrounding his coming.  And this is but the first episode of the Messiah’s life on his return, which the next article will elaborate on, if God wills.

[1] Al-Mahdi literally means ‘the paver of the way’ but the meaning of the proper name is ‘the one who is directed by God to the truth’.

[3] The corner of the Kabah nearest the door. The black stone is built into that corner.

[4] The station of Abraham is the rock upon which he stood in order to build the walls of the Kaaba.

[5] The ‘Expedition of Kalb’, mentioned by Umm Salamah in Sunan Abu Dawood.

[6] Ash-Sham is the geographical area including Syria, Lebanon, Jordan, Palestine and parts of Iraq.

[8] The exact location has been variously reported in Musnad Ahmad as being ‘Khorastan’or ‘Yahwadiah in Asbahan’, the latter being associated with Shahrstan.

[9]  Anas ibn Malik said that the Messenger of God said, "The False Messiah will be followed by 70,000 Jews from Asbahan.’ Saheeh Muslim.

[10] Saheeh Bukhari. The evidence for this is indirect. In the hadeeth it is the followers of the False Messiah who ask a man who denies him, ‘Don’t you believe in our Lord?’ Later, after killing the man and restoring him to life, the False Messiah asks, ‘Now do you believe in what I claim?’ In two other hadeeths from the same source, the Prophet, may the mercy and blessings of God be upon him, says: ‘Verily, God is not blind in one eye! However, the False Messiah is blind in his right eye, being an eye (like) a floating grape.’ And: ‘There is not a prophet who has not warned his nation of that lying one-eyed man  (The False Messiah); for he is truly one-eyed, and, verily, your Lord, Most Powerful and Sublime, is not one-eyed.’ The implication is that we should not confuse the False Messiah with our Lord God, no matter what he claims.