Description: Similarities and differences about the second coming of Jesus between Christians and Muslims.  The Messiah at the end of times according to Judaism. 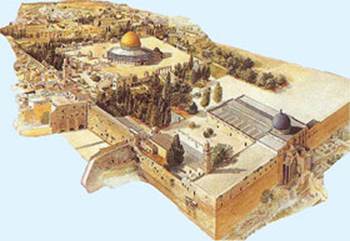 Both Islam and Christianity expect the return of Jesus at the end of times, and both expect trials and tribulations to occur at the time.  Many of the themes of these trials are similar, but they are also very different in detail and definition.  Both religions expect the nation of believers to be the final victors, but the Christian believes that these are defined as the believers in the Gospel of the New Testament and in Christ as ‘the Savior’ and ‘the Incarnation’ of God, whilst the Muslim knows that it refers to those who believe in the pure monotheism entailed in submission to the One and Only True God.

The return of Jesus is preceded in both religions by signs, again similar in general description, but subtly different in detail.  Both religions teach that the return of Jesus will be preceded by a great and powerful figure of falsehood and temptation, called the Maseeh ad-Dajjal (The False Messiah) by the Muslims and the Anti-Christ by the Christians.  Before this event other signs that agree with each other include a general increase in immorality and fornication, murder and crime, and general lawlessness, debauchery and falling away from religion and true knowledge.  Accompanying these signs of civil malaise will be internecine[1]  wars, and natural disasters following closely one upon the other.  The details and timings of these, however, are substantially different, even within particular faiths.  How the Christian faith regards the second coming depends on the doctrinal view held.  Four broad views are prominent: Historical and Dispensational Ante-millennialism, and Preterist Post and A-millennialism.[2]

Ante-millennialism[3]  has two branches of interpretation.  Both postulate that Jesus will come and then, after defeating the Anti-Christ, will rule the earth with the ‘elect’ for 1000 years before the evil souls are resurrected, and Satan is unbound in the resurrected Anti-Christ[4].  They differ significantly concerning the events around this second coming. 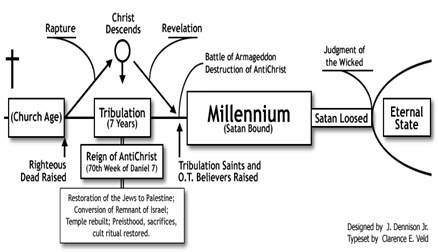 While both agree that it will occur during a seven year period of Tribulation when the Anti-Christ reigns, one places the return of the Jews to Israel and the rebuilding of the temple during this seven year period, while the other holds that Jesus will re-establish Jerusalem as his Capital, rebuilding of the temple during his reign.  The former determines that the past elect of Church will be raised to life before the tribulation starts, and then chosen to rule with the descended Jesus, while the righteous Jews will be resurrected along with heroes who stood against the Anti-Christ and died at the end of the tribulation, heralding his reign of peace and plenty.  The latter holds that the ‘rapture’ of all the elect, these being all the dead saints of Christianity and the righteous of Judaism before the advent of Christ, will be at the second coming of Jesus, and will thereafter constitute, with their offspring, the deserving citizens of the millennium rule.  When Satan is finally loosed in the resurrected Anti-Christ, a great battle will be fought with the minions of Satan and Satan, the false prophet, will be defeated and hurled into Hell, ushering in the end of the world.  Here, again, the two branches differ.  The Historicist sees Gog and Magog as the nations Satan leads in rebellion when he is loosed, while the Dispensationalist, although he agrees Satan will lead an army of deceived nations, does not place The Gog and Magog as being among them.[5] 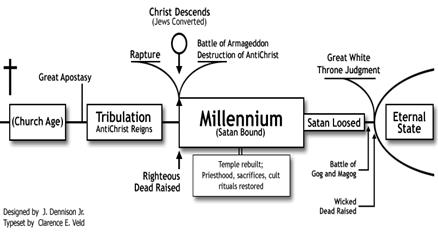 After the defeat of the forces of evil, mountains will crumble, the earth will become a flat plain and Judgment will be instituted on the people of earth.  The true believers in Christ will be rewarded with heaven and eternal communion with God, and the disbelievers and unrepentant sinners will be consigned to hell and eternal separation from God.

Preterism is the general name for the viewpoint found in both the views that oppose Ante-millennialism.  It sees the return of Jesus as having already happened at the time of the destruction of the temple Jerusalem, at least in terms of judgment.  That is, they see people as judged when they die.  Hence it sees the earth itself as everlasting, and that perfecting our faith and the truth about God is a never ending task set us by God.[6]  Among the partial Preterists, the moment of perfection is the second physical coming of Jesus, who will then reign forever over those who have achieved salvation.

Post-millennialism sees the 1000 year reign of Jesus as more figurative than literal, and that it has already begun.  Jesus is literally the king of earth right now, judging the dead as they die, and the Christian church is in the process of perfecting belief in him and defeating Satan.  Then Jesus will return to vanquish the Anti-Christ, heralding the end of the world, and establish the Church to rule with him.

A-millennialism[7] also sees the 1000 year reign as figurative and already established, but, like ante-millennialism, it envisages Judgment Day as the day of sorting out the good from the bad and eternally consigning them to their respective destinations.

These viewpoints often overlap, so one is not sure where one doctrine leaves off and the other starts.  None of them, however, conform to the Islamic view of the reign of Jesus and his role in the second coming.

Islam sees Jesus’ return as a completion of his life and work, which he left incomplete.[8]  As the true Messiah, he alone has the power granted to him by God to defeat the false Messiah at the end of time.  His rule will witness the invasion of the Gog and Magog, whom not even he will be able to defeat.  Rather, he will pray to God who will then destroy them Himself.  The end of the Gog and Magog will herald the beginning of a world hegemony in which every one will believe, or at least submit to, his reign as God’s representative.  He will rule by God’s Law as taught by Muhammad (i.e. Islam), may the mercy and blessings of God be upon him, until he dies at the age of about 70 or 75.  In this period of time there will be plenty for all, and peace throughout the world.  Then, some time after he dies and is buried, all the Muslims will be caught up by a breeze and wafted into the hereafter.  The remaining people on earth will be unbelievers, and they alone will witness the final chapter of earth.

Many of these events described in Islam echo the concept of the Messiah at the end of times conceived of in Judaism, although they believe the Law with which he will reign will be the Law of Moses, rather than Muhammad, peace be upon them.  Both Islam and Judaism regard the coming of the Messiah as essentially uniting, gathering believers together from the ends of the earth.  Both see his rule as returning to the fundamentals of faith and Law.  Both see his role as that of a leader who will fight God’s war against the forces of evil, and that this war will be followed by a peaceful hegemony in which God’s Law will prevail throughout the world.

Where they differ is in who this end of time figure represents.  To the Jews, the Messiah necessarily will be a Jewish leader who re-establishes Israel and the temple and all its rites in Jerusalem.  To the Muslim, he represents the championing of pure Islam, sorting hypocrites from true believers.

All three visions of the Messiah at the end of time hold something in common.  In the next four articles, however, we will expound the Muslim picture of the future, which is envisioned to be just around the corner.  This vision is very clear and subject to little doctrinal variation, unlike both Jewish and Christian viewpoints.  It is up to you to draw the parallels that are apparent and reject that which does not reflect the truth represented herein.

[1] Of mutual slaughter and destruction

[3] The four diagrams are taken from (http://www.blueletterbible.org/faq)

[4] The False Prophet is often envisaged as the resurrected Anti-Christ, possessed or influenced by Satan, but not always. Other interpretations see him as essentially independent; neither possessed nor resurrected nor the Anti-Christ.

[5] It is not clear in either case how the ‘wicked nations’ survived the Millennium, whether or not they are constituted of the Gog and Magog.

[6] THE PAROUSIA: A Careful Look At The New Testament Doctrine Of The Lord’s Second Coming , by  James Stuart Russell, (1878)

[7] See: AMILLENNIALISM, or The truth of the Return of the Lord Jesus, by Rev. D. H. Kuiper

[8] This does not refer to the mission given to him by God until his ascension. As Jesus did not die, and eventually must, his life is not over, nor is the remainder of the works that constitute the complement of his life undertaken yet. In John 16:12, Jesus may have been alluding to this when he said, "I still have much to tell you, but you cannot bear it now," just prior to the retreat to Gethsemane.