Description: When one looks into current affairs, one cannot help but to note that the Muslim world is distraught with unrest and violence.  This article will discuss how colonization and Western interference has played the primary role in forming this state of affairs. 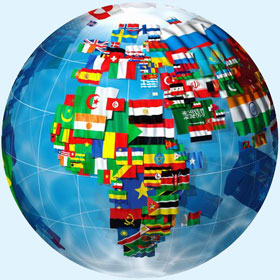 The Quran and the Sunnah have been the guide of Muslim political and moral activism throughout the centuries.  The example of how the Prophet Muhammad and his companions led their lives and developed the first Muslim community serves as a blueprint for an Islamically guided and socially just state and society.

More than a prophet, the Prophet Muhammad, may the mercy and blessings of God be upon him, was the founder of a state.  In the era of the Prophet Muhammad and his successors, all Muslims belonged to a single community whose unity was based upon the interconnection of religion and the state, where faith and politics were inseparable.  Islam expanded from what is now Saudi Arabia across North Africa, through the Middle East and into Asia and Europe.  Historically, Islam has been the religious ideology for the foundation of a variety of Muslim states, including the great Islamic empires: Umayyad (661–750), Abbasid (750–1258), Ottoman (1281– 1924), Safavid (1501–1722), and Mughal (1526–1857).  In each of these empires and other sultanate states, Islam was the basis of the state’s legal, political, educational, economic, and social institutions.

By the 11th century the Islamic world was under attack by the Turks and the Mongols.  They were not conquered by Islam; rather, they entered the Islamic world as conquerors and converted to Islam over the following centuries.

Over the last two centuries the Islamic world has been under another transformation from the West.  The Europeans who came in the 19th and 20th centuries to militarily colonize the Muslim world did not convert like the Turks and Mongols.  For the first time, Muslims were politically subjugated by the European empires of Russia, Holland, Britain, and France.

The 20th century was marked by two dominant themes: European colonialism and the Muslim struggle for independence.  The legacy of colonialism remains alive today.  Colonialism altered the geographical map of the Muslim world.  It drew the boundaries and appointed leaders over the Muslim countries.  After WWII,  the French were in West and North Africa, Lebanon, and Syria; the British in Palestine, Iraq, Arabian Gulf, the Indian Subcontinent, Malaya, and Brunei; and the Dutch in Indonesia.  It replaced the educational, legal, and economic institutions and challenged the Muslim faith.  Colonial officers and Christian missionaries became the soldiers of European expansion and imperialism.  Christianity was seen by the colonialists as inherently superior to Islam and its culture.  This attitude can be seen in the statement of Lord Cromer, the British counsel in Cairo from 1883-1907, “…as a social system, Islam has been a complete failure.  Islam keeps women in a position of inferiority…it permits slavery…its general tendency is intolerance towards other faiths…”

European colonialism replaced Muslim self rule under Islamic Law, which had been in existence from the time of the Prophet Muhammad, by their European lords.  The colonialists were modern Crusaders – Christian warriors going out of their way to uproot Islam.  The French spoke of their battle of the cross against the crescent.  The only difference was that the Europeans came, this time, not with cavalry and swords, but with an army of Christian missionaries and missionary institutions like schools, hospitals, and churches, many of which remain in Muslim countries to this day.  The French seized the Jami’ Masjid of Algiers and turned it into the cathedral of Saint-Philippe with the French flag and cross on the minaret, symbolizing Christian domination.[1]

The Muslim world’s centuries of long struggle with Western colonial rule was followed by authoritarian regimes installed by European powers.  The absence of stable states has led many to ask whether there is something about Islam that is antithetical to civil society and rule of law.  The answer to this question lies more in history and politics than in religion.  Modern Muslim states are only several decades old and they were carved out by European powers to serve Western interests.

In South Asia, the British divided the Indian subcontinent into India and Pakistan, giving portions of the Muslim-majority state of Kashmir to each of them.  The conflicts that resulted from these actions have led to the deaths of millions in the communal warfare between Hindus and Muslims, the civil war between East and West Pakistan that led to the creation of Bangladesh, and conflicts in Kashmir over Indian rule that persist to the present day.  In the Middle East, the French created modern Lebanon from portions of Syria, and the British set the borders for Iraq and Kuwait and created a new entity called Jordan.  They also created a new country called Israel, ousting non-Jewish locals and taking land once belonging to Christians and Muslims and surrendering it to a foreign Jewish authority.  Such arbitrary borders fed ethnic, regional, and religious conflicts including the Lebanese Civil War between Christians and Muslims, the occupation of Lebanon by Syria, the Gulf War, which resulted from Saddam Hussein’s claim to Kuwaiti territory, and the Israel-Palestinian conflict which need no further explanation.

Political and economic models were borrowed from the West to replace the Islamic political and economic systems after independence from colonial rulers in the mid-twentieth century, creating overcrowded cities lacking social support systems, high unemployment, government corruption, and a growing gap between rich and poor.  Rather than leading to a better quality of life, Westernization led to the breakdown of traditional family, religious, and social values.  Many Muslims blame Western models of political and economic development as the sources of moral decline and spiritual malaise.

Unelected governments, whose leaders are kings, military or ex-military officers, rule the majority of countries in the Muslim world.  State power is heavily reliant on security forces, police, and military, and where freedoms of assembly, speech, and press are severely limited.  Many Muslim states operate within a culture of authoritarianism that is opposed to civil society and a free press.

In addition to influencing those who came to power in emerging modern Muslim nation-states, Europe, and later America, forged close alliances with authoritarian regimes, tolerating or supporting their non democratic ways in exchange for, or to ensure, Western access to oil and other resources.

When people ask themselves why the Muslim world is distraught with violence and unrest, the answer can surely be found in the colonial interference, both past and present, in the region.  Therefore, any future success depends upon returning to a society which is governed by the principles of the people who live in it, one in which all its affairs are governed by Islam.

[1] Some of the early imperialist policies of the colonial powers carried not only economic, but religious and cultural agendas.  The French, for example, sought to replace Islamic culture with their own by, among other measures, imposing controls on Islamic courts and suppressing many Muslim institutions.  After transforming the Grand Mosque of Algiers into the Cathedral of Saint-Philippe, for example, the archbishop of Algiers announced a missionary plan to “save” Muslims from “the vices of their original religion generative of sloth, divorce, polygamy, theft, agrarian communism, fanaticism and even cannibalism.”  Azim A. Nanji, ed., The Muslim Almanac (Detroit: Gale Research, Inc., 1996), p. 123; Arthur Goldschmidt Jr., A Concise History of the Middle East, 3rd ed. (Boulder, Colo.:Westview Press, 1988), p. 231; John L. Esposito, The Islamic Threat: Myth or Reality?, 3rd ed. (New York: Oxford University Press, 1999), p. 50; Fawaz A. Gerges, America and Political Islam: Clash of Cultures or Clash of Interests?  (Cambridge: Cambridge University Press, 1999).

This is actually very true, I am an Indonesian, and I can say that the effect of colonialism in my country is strongly present. Although I am born Muslim, and the fact that Indonesia is about 90% Muslim, only recently have I started to learn about my religion, His Mercy and Guide upon us all, and even worse, before I learn about Islam, I have the same misconception about Islam as the Westerners. The good thing is, the interest in (going back to) Islam is growing quickly here, more and more people are more aware about the true Islam, Islamic books have become an abundance, more Ulama are appearing everywhere, more people learn about Islam. I pray that someday, the Muslim world will integrate once again, creating a unified nation that is ruled by Allah's Law. May Allah's Mercy and Blessing be upon us all. I apologize if someone is offended in this comment.