The Prophecies of the Quran

Description: The fulfillment of the various prophecies in the Quran is a clear proof that it is from a Divine source. 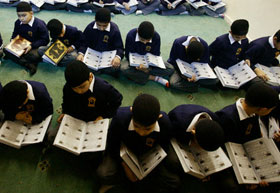 The Quran contains many prophecies that have been fulfilled, but in this discussion, we will limit ourselves to only five.[1]  The first two prophecies are noteworthy: unlike any other world scripture, the Quran prophesizes its own preservation under divine care, and we will demonstrate how it actually occurred.

The Protection of the Quran from Corruption

The Quran makes a claim no other religious text makes, that God Himself will keep its text safe from alteration.  God says:

"Behold, it is We Ourselves who have gradually revealed this reminder, and, behold, it is We who shall truly guard it [from all corruption]." (Quran 15:9)

The Ease of Memorizing the Quran

God has made the Quran easy to memorize:

The ease with which Quran is memorized is inimitable.  There is not a single scripture or religious text in the world that is as easy to memorize; even non-Arabs and children commit it to memory easily.  The entire Quran is memorized by almost every Islamic scholar and hundreds of thousands of ordinary Muslims, generation after generation.  Almost every Muslim has some portion of the Quran memorized to read in his prayers.

Before the rise of Islam, the Romans and the Persians were two competing superpowers.  Romans were led by Heraclius (610–641 CE), a Christian Emperor, whereas the Persians were Zoroastrians led by Khosrow Parviz (reigned 590–628 CE), under whom the empire achieved its greatest expansion.

In 614, the Persians conquered Syria and Palestine, taking Jerusalem, destroying the Holy Sepulcher and the ‘True Cross’ carried to Ctesiphon.  Then, in 619, they occupied Egypt and Libya.  Heraclius met them at Thracian Heraclea (617 or 619), but they sought to capture him, and he rode madly back to Constantinople, hotly pursued.[2]

The Muslims were grieved by the Roman defeat as they felt spiritually closer to Christian Rome than Zoroastrian Persia, but the Meccans were naturally buoyed up by the victory of pagan Persia.  To Meccans, the Roman humiliation was a sinister omen of the defeat of the Muslims at pagan hands.  At the time God’s prophecy comforted the faithful:

"The Romans have been defeated - in a land close by; but they, (even) after (this) defeat of theirs, will soon be victorious- within ten years.  With God is the Decision, in the past and in the future: on that Day shall the believers rejoice with the help of God.  He helps whom He will, and He is the Mighty, the Most-Merciful." (Quran 30:2-5)

The Quran made a prophecy of two victories:

(i)   The future Roman victory within ten years over Persians, something unimaginable at the time

Both of these prophecies actually occured.

In 622, Heraclius left Constantinople as prayers rose from its many sanctuaries for victory over the Persian Zoroastrians and the reconquest of Jerusalem.  He devoted the next two years to campaigns in Armenia.  In 627, he met the Persians near Nineveh.  There, he killed three Persian generals in single combat, killed the Persian commander, and scattered the Persian host.  A month later, Heraclius entered Dastagird with its stupendous treasure.  Khosrow was overthrown by his son, who made peace with Heraclius.  Returning to Constantinople in triumph, Heraclius was hailed as a hero.[3]

Also, in the year 624 AH, Muslims defeated the Meccans in the first and decisive Battle at Badr.

In the words of an Indian scholar:

"…a single line of prophecy was related to four nations and the fate of two great empires.  All this proves the Holy Quran to be the Book of God."[4]

The Prophecy of Pagan Defeat

The Quran predicted the defeat of unbelievers in Mecca while Prophet Muhammad and his followers were still being persecuted by them:

"Or do they (the Meccan disbelievers) say: ‘We are a great multitude, and we shall be victorious?’  Their multitude will be defeated, , and they shall turn their backs [in flight]!" (Quran 54:45)

The prophecy was revealed in Mecca, but was fulfilled at the Battle of Badr, two years after the Prophet’s migration to the city of Medina.

The Fate of Specific Individuals

Waleed ibn Mugheera was a staunch enemy who openly ridiculed the Quran:

The Quran prophesized he will never accept Islam:

"Soon will I cast him into Hell-Fire!  And what will explain to thee what Hell-Fire is?  It leaves naught nor does it spare aught." (Quran 74:26-28)

Waleed died in a state of disbelief as prophesized by the Quran.

Also, concerning Abu Lahab, a fiery opponent of Islam, the Quran foretold he will die opposing the religion of God:

"May the hands of Abu Lahab perish, and [indeed] he has perished.  His wealth and gains will not profit him.  He will be plunged in flaming Fire." (Quran 111:1-3)

Specifically, three prophecies were made about Abu Lahab:

(i)   The conspiracies of Abu Lahab against the Prophet would not succeed.

(ii)  His wealth and children would not benefit him.

(iii) He would die opposing God’s religion and enter the Fire.

Abu Lahab also died in a state of disbelief as prophesized by the Quran.  Had Waleed or Abu Lahab accepted Islam even outwardly, they would have disproved its prophecies and thus its heavenly source!

In addition, Abu Lahab had four sons, two of whom died at a young age during his lifetime.  The other two sons and a daughter embraced Islam and frustrated his hopes!  Finally, he died of a plague; people would not touch his body out of fear of contamination and dumped mud and stones on him where he died to make it his grave.

A key foundation to believing that a scripture is actually a revelation of God is internal truth, whether it be in regards to occurrences in the past, to come in the future, or in contemporary ages.  As one can see, there are many prophecies mentioned in that which is to come, some of which were fulfilled in the Prophet’s lifetime, or have been fulfilled since his death, while others are yet to appear.