Description: Prophet Moses led his people, the Children of Israel, out of Egypt. 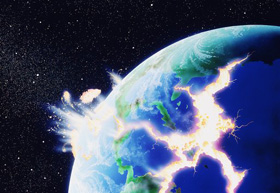 They left under the cover of darkness, carrying their meagre possessions headed across the desert towards the Red Sea.  When they reached the sea, the Pharaoh’s army was pursuing them closely, the people of Moses could see the dust stirred up by the approaching army.  They looked at the sea in front of them and felt trapped.  By the will and permission of God, Moses struck the sea with his staff and the sea parted revealing a pathway.  The Children of Israel walked across the seabed.  When the last person had safely crossed, the sea fell back into place and drowned the army of Egypt including the tyrannical Pharaoh.

The Children of Israel were a people oppressed and humiliated over a long period.  Several generations had lived under the yoke of the Pharaoh.  They had become a belligerent people.  Always expecting the worst.  Always longing for a slice of the good things of this world.  There sense of honour and self-confidence had been eroded.  During their journey out of Egypt to the Promised Land, there was ample opportunity for their character flaws to become obvious.  The Children of Israel were ungrateful to God, despite His care and attention to them.  They were incapable of behaving submissively and accepting the will of God.

When the Children of Israel came across a people worshipping idols, their eagerness to be like those people they perceived to be happy became manifest and they asked Moses to let them have an idol, completely forgetting the miracles of God they had just witnessed.  When God provided them with delicious food which was till then unknown to them, they complained, wanting the inferior food they were used to.  When Moses directed them to march into a town and overthrow the Canaanites they refused, mostly out of fear and thus disobeyed the command of God.  Ibn Kathir narrates that Moses was able to find only two men willing to fight.

The ‘days of wandering’ began.  Each day was like the one before it.  The people travelled with no destination in mind.  Eventually they entered the Sinai; Moses recognised it as the place where he had spoken to God before his great journey into Egypt had begun. God ordered Moses to fast, as purification, for thirty days, and then added ten more days.  After the fast was completed, Moses was ready to once again communicate with God.

“And We appointed for Moses thirty nights and added to the period ten more, and he completed the term, appointed by his Lord, of forty nights.  And Moses said to his brother Aaron, “Take my place among my people, act in the Right Way (by ordering the people to obey God and to worship Him Alone) and follow not the way of the mischief makers.”  And when Moses came at the time and place appointed by Us, and his Lord spoke to him, he said, “O my Lord!  Show me (yourself) that I may look upon You.”  God said, “You cannot see Me, but look upon the mountain, if it stands still in its place then you shall see Me.”  So when his Lord appeared to the mountain, He made it collapse into dust, and Moses fell down unconscious.  Then when he recovered his senses he said, “Far removed are you from every imperfection, I turn to You in repentance and I am the first of the believers.”  God said, “O Moses, I have chosen you above men by My Messages, and by My speaking to you.  So hold that which I have given you and be among the grateful.” (Quran 7:142-144)

God gave Moses two stone tablets, written upon them were the Ten Commandments.  These commandments form the basis of the Jewish law, the Torah, and they are standards of morality still set by the Christian churches.  Ibn Kathir and the early scholars of Islam state that the Ten commandments are reiterated in two verses from the Quran.

“Come, I will recite what your Lord has prohibited you from, Join not anything in worship with Him; be good and dutiful to your parents; kill not your children because of poverty- We provide sustenance for you and for them; come not near to shameful sins whether committed openly or secretly; and kill not anyone whom God has forbidden, except for a just cause.  This He has commanded you that you may understand.  And come not near to the orphan’s property, except to improve it, until he or she attains the age of full strength; and give full measure and full weight with justice.  We burden not any person but that which he can bear.  And whenever you give your word (i.e. judge between men or give evidences) say the truth even if a near relative is concerned, and fulfil the Covenant of God.  This He commands you, that you may remember.” (Quran 6:151-152)

Moses had been absent for forty days.  His people had become restless, they were like children, complaining and acting impulsively.  Ibn Kathir describes their descent into the unforgiveable sin of idolatry.  “As-Samiri, a man who was inclined towards evil, suggested that they find themselves another guide, as Moses had broken his promise.”  He said to them, “In order to find true guidance, you need a god, and I shall provide one for you.”  So he collected all their gold jewellery, and melted it down.  During the casting, he threw in a handful of dust, acting like a magician to impress the ignorant.  From the molten metal, he fashioned a golden calf.  It was hollow, and when wind passed through it, it produced a sound.”

It was as if they had succeeded in making themselves a living God.  Moses’ brother Aaron had been afraid to stand up to the people but when he saw the idol and realised what a grave sin was being committed he spoke up.  He reminded the people to worship God Alone and he warned them of dire consequences for their actions both from Moses on his return and from God Himself.  Those who remained true to their belief in One God separated themselves from the idol worshippers.  When Moses returned to his people he saw them singing and dancing around the golden calf.  He was furious.