A Description of Hellfire (part 1 of 5): An Introduction

Description: The Names of Hell, its presence and eternalness, and its guardians. 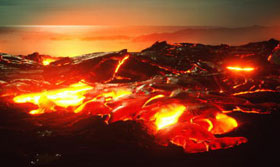 Islam teaches that Hell is a real place prepared by God for those who do not believe in Him, rebel against His laws, and reject His messengers.  Hell is an actual place, not a mere state of mind or a spiritual entity.  The horrors, pain, anguish, and punishment are all real, but different in nature than their earthly counterparts.  Hell is the ultimate humiliation and loss, and nothing is worse than it:

"Our Lord!  Surely, whom You admit to the Fire, indeed You have disgraced him, and never will the wrongdoers find any helpers." (Quran 3:192)

"Know they not that whoever opposes God and His Messenger (Muhammad), certainly for him will be the Fire of Hell to abide therein?  That is the extreme disgrace." (Quran 9:63)

The Names of Hell

Hell Fire has different names in Islamic texts.  Each name gives a separate description.  Some of its names are:

Jaheem – fire -  because of its blazing fire.

Jahannam - Hell - because of the depth of its pit.

Ladthaa - blazing fire - because of its flames.

Sa’eer - blazing flame - because it is kindled and ignited.

Saqar - because of the intensity of its heat.

Hatamah - broken pieces or debris - because it breaks and crushes everything that is thrown into it.

Paradise and Hell Presently Exist and are Eternal

Hell exists at the present time and will continue to exist forever.  It will never die down, and its inhabitants will remain in it forever.  No one will come out of Hell except sinful believers who believed in the Oneness of God in this life and believed in the specific prophet sent to them (before the coming of Muhammad).  The polytheists and unbelievers will reside in it forever.  This belief has been held from classical times and is based on clear verses of the Quran and confirmed reports from the Prophet of Islam.  The Quran speaks of Hell in the past tense and states that it has already been created:

"And fear the Fire which is prepared for the disbelievers." (Quran 3:131)

In another report, the Prophet said:

"Surely, the soul of a believer is a bird hanging on the trees of Paradise, until God returns it to his body on the Day of Resurrection." (Muwatta of Malik)

These texts make it clear that Hell and Paradise exist, and that souls may enter them before the Day of Resurrection.  Speaking of Hell’s eternity, God says:

"They will long to leave the Fire, but never will they leave there from; and theirs will be a lasting torment." (Quran 5:37)

"Surely, those who disbelieve and did wrong; God will not forgive them, nor will He guide them to any way except the way of Hell, to dwell therein forever." (Quran 4:168-169)

"Surely, God has cursed the disbelievers, and has prepared for them a flaming Fire wherein they will abide for ever." (Quran 33:64)

"And whosoever disobeys God and His Messenger, then surely, for him is the fire of Hell, he shall dwell therein forever." (Quran 72:23)

The Keepers of Hell

Mighty and stern angels stand over Hell who never disobey God.  They do precisely as ordered.  God says:

"O you who believe, save yourselves and your families from a Fire whose fuel is men and stones over which are (appointed) angels, stern and severe, who flinch not (from executing) the commands they receive from God, but do (precisely what) they are commanded." (Quran 66:6)

They are nineteen keepers of Hell as God says:

"Soon I will cast him into Hell Fire.  And what will explain to you what is Hellfire?  Nothing does it allow to endure, and nothing does it leave alone!  Darkening and changing the color of man!  Over it are nineteen (angels as keepers of Hell)." (Quran 74:26-30)

One should not think that the inhabitants of Hell will be able to overcome the keepers of Hell because there are just nineteen of them.  Everyone of them has the strength to subdue all humanity by himself.  These angels are called the Guards of Hell by God in the Quran:

"And those in the Fire will say to the Guards of Hell, ‘Call upon your Lord to lighten for us the torment for a day!’" (Quran 40:49)

The name of the chief angel guarding over Hell is Malik, as mentioned in the Quran:

"Surely, the disbelievers will be in the torment of Hell to abide therein forever.  (The torment) will not be lightened for them, and they will be plunged into destruction with deep regrets, sorrows and in despair therein.  We wronged them not, but they were the wrongdoers.  And they will cry: ‘O Malik! Let your Lord make an end of us’ He will say: ‘Surely, you shall abide forever.’  Indeed We have brought the truth to you, but most of you have a hatred for the truth" (Quran 43:74-78)

Next: A Description of Hellfire (part 2 of 5): Its Appearance

This Article really brings the fear of God. Dont know how every individual spent their life every second but once when they read this article or the QURAN which reminds about the eternal, hereafter LIFE they would realise the plight they gonna meet... this article is ANOTHER REMINDER!! Many options like SAVE, PRINTS ETC... are good. article is very informative. Mashallah! May Allah reward u for the effort u all have taken Inshallah!! dua'z Amina Mehar Nisha

Assalamu alaikum This is a very informative and useful website. The describtion and pictures are attractive. May Allah bless you all.

this is sooo true mashallah who ever made this site!

may allah protect and guide us to the right path

I wanted to let you know, in 2010 i found this page, this hell fire page. this is the very first thing i ever read about islam. i was a devoted christian. just say three weeks later after reading this. i became muslim. i have been now muslim over 10 years all because of this page. its guiding page. who ever made this, you are getting life time rewards from it. thank you so much may allah reward you.