Description: By the permission of God, Moses defeats the magicians. 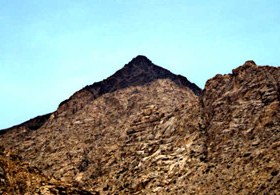 Quran narrates several conversations between Moses and Pharaoh.  One of the most detailed accounts is in chapter 26 which is entitled ‘The Poets’.  Moses speaks kindly to Pharaoh about God, His Mercy, and His Paradise, but Pharaoh reacts disdainfully and arrogantly.  He reminds Moses of his past crime and asks Moses to be grateful that he was raised in the palace amongst luxuries and wealth.  Moses excuses himself by saying he committed the crime of killing an innocent man when he was ignorant and  points out that he was raised in the palace only because he was unable to live with his own family due to Pharaoh’s indiscriminate killing of baby boys.

“Moses said, “I did it then, when I was an ignorant (as regards my Lord and His Message).  So I fled from you when I feared you.  But my Lord has granted me religious knowledge, and Prophethood, and appointed me as one of the Messengers.  And this is the past favour with which you reproach me, and that you have enslaved the children of Israel.”

Pharaoh said, “And what is the Lord of the mankind, jinn, and all that exists?”

Moses replied, “The Lord of the heavens, and the earth, and all that is between them, if you seek to be convinced with certainty.”

Pharaoh said to those around, “Do you not hear what he says?”

Moses said, “Your Lord and the Lord of your ancient fathers!”

Pharaoh said, "Indeed, your 'messenger' who has been sent to you is mad."

Moses said, “Lord of the east, and the west, and all that is between them, if you did but understand!”

Pharaoh said, “If you choose a god other than me, I will certainly put you among the prisoners.”

Moses said, “Even if I bring you something manifest (and convincing).”

Pharaoh began by mocking Moses, then accusing him of being ungrateful and finally he threatened him.  During this historical period, many people in Egypt practiced magic.  There were even schools teaching classes in magic and illusion.  Pharaoh jumped to the wrong conclusion, he thought that the manifest signs Moses was able to show by the permission of God were magic tricks and illusions.

When Moses threw his stick and it became a serpent, slithering and sliding along the ground, and when he withdrew his hand from his cloak and it strongly shone bright and white, Pharaoh presumed that Moses has learned the art of illusion.  Ibn Kathir narrates the Pharaoh detained Moses and Aaron while he despatched couriers throughout Egypt to summon all the magicians to the palace.  Pharaoh promised the magicians prestige and money in return for their tricks.  A contest was set up between Moses and the Egyptian magicians.

Pharaoh was confident that his magicians were unbeatable.  He had long been using them to influence the hearts and minds of the people.  Pharaoh used their conjuring tricks and illusions to dominate and control his subjects.  Moses was able to set the day for the contest and he chose a customary festival day.  The streets would be crowded with people and the power and strength of God would be visible to all.  There would be maximum exposure to the truth of the words that, there is none worthy of worship except God alone.

“O Moses!  Have you come to drive us out from our land with your magic?  We can also show you magic to match it, so set an appointment between us and you, which neither we nor you shall forget to keep, in a fair (open) place.’

Moses said, ‘Let the encounter be on the day (of the Festival) of Adornment, and let the people assemble at forenoon.’” (Quran 20:56-59)

Moses asked the magicians to perform first.  It is narrated that there were up to 70 magicians lined up in a row.  The magicians threw their sticks and ropes in the name of the Pharaoh and the ground became a seething sea of serpents, writhing and slithering.  The crowd looked on in amazement.  Moses was afraid, but he was steadfast, secure in the knowledge that God would protect him and make his task easy.  God covered him with tranquility and directed Moses to throw his stick.

Moses stick transformed into a huge serpent and quickly devoured all the illusionary serpents that covered the ground.  The crowd rose up like a great wave, cheering and shouting for Moses.  The magicians were astounded. They were well skilled in the art of magic and illusion, for they were the best magicians in the world at the time, but their conjuring was nothing but a trick.  The magicians knew that Moses’ serpent was real.  They collectively fell in prostration declaring their belief in the Lord of Moses and Aaron.

“And the magicians fell down prostrating.  Saying: “We believe in the Lord of mankind, jinn, and all that exists.  “The Lord of Moses and Aaron.”  Pharaoh said, “You have believed in him before I give you leave.  Surely, he indeed is your chief, who has taught you magic!  So verily, you shall come to know.  Verily, I will cut off your hands and your feet on opposite sides, and I will crucify you all.”  They said, “No harm!  Surely, to our Lord we are to return.  “Verily!  We hope that our Lord will forgive us our sins, as we are the first of the believers in Moses and in the Monotheism which he has brought from God.”

The magicians began that day as disbelievers, corrupt and interested only in riches and fame; however, within a few hours they had recognised the truth.  They saw with their own eyes the omnipotence of God and repented for their errant ways.  God is the most merciful, and He will forgive those who turn to Him with sincere and humble repentance.

Moses and Aaron left the contest field.  The magicians, as it is told,  were put to death, their bodies hung in the squares and market places to teach the people a lesson.  Pharaoh returned to his palace and his rage magnified.  He quarrelled with his ministers and advisors.  He sent them away and then summoned them into his presence.  He turned to his chief minister and said, “Am I a liar Oh Haman?”  The Pharaoh had built his kingdom on the fact that he was a god, what was he to do now that Moses had revealed that there is no god but the one and only God.

“O Haman!  Build me a tower that I may arrive at the ways, - the ways of the heavens, and I may look upon the God of Moses but verily, I think him to be a liar.”  Thus, it was made fair seeming, in Pharaoh’s eyes, the evil of his deeds, he was hindered from the Right Path, and the plot of Pharaoh led to nothing but loss and destruction for him.” (Quran 40:36-37)