The Style of the Quran

Description: The article addresses the major themes of the Quran, the topics it discusses, its style of presentation, and some points of comparison with their own scriptures for Christian and Jewish readers. 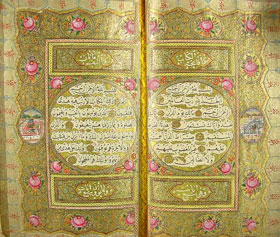 What topics does the Quran discuss?  It covers various subjects.  Most importantly, it talks about the unity of God and how to live a life which accords to His Will.  Other topics include religious doctrine, creation, criminal and civil law, Judaism, Christianity, polytheism, social values, morality, history, stories of past prophets, and science.

The Quran calls the great human exemplars of the past prophets and mentions their great sacrifice in spreading the message of God, the most important of them being Noah, Abraham, Moses, and Jesus.  The Quran elaborates on the ways in which the followers of the prophets, specifically the Jews and the Christians, have or have not lived up to the prophetic messages.  It also discusses the fate of past nations who rejected their Prophets, such as Noah and Lot.  It issues instructions on how to live a life pleasing to God.  It commands people that they should pray, fast, and take care of the needy.  It discusses matters of human interrelationships, sometimes in great detail - such as laws of inheritance and marriage - in a manner reminiscent of parts of the Hebrew Bible but foreign to the New Testament.  The Quran tells people that they should observe God’s instructions purely for God’s sake, not for any worldly aims.  It warns those who deny God’s messages that they will be thrown into the fire of Hell, and it promises those who accept the messages that they will be given the bliss of Paradise.

The Quran retells in their original form many of the stories from the Biblical heritage, especially that of Moses (mentioned by name more than any other person, followed by Pharaoh, his great enemy, who is the Quranic archetype of human evil).  However, it does not offer a sustained narrative of the kind found in the Book of Exodus.  It has much to say about the moral and legal duties of believers, but contains nothing like the law-code which is the centerpiece of the Book of Deuteronomy.  Many Quranic passages could aptly be described as preaching; but where the voice of the preacher in the Gospels is that of Jesus during his ministry on earth, in the Quran it is that of the ever-living God.

Also, the Quran repeats certain verses and themes at times, shifts topics, and often relates narratives in summarized form.  We can see two reasons for this characteristic.  First, it serves a linguistic purpose and is one of the powerful rhetorical techniques of classical Arabic.  Second, all themes of the Quran, no matter how varied, are wrapped around one common thread running through the entire book: that all types of worship rendered to others besides or alongside God is false, and that obedience to Him and His prophets, Muhammad being one of them, is a must.  The Quran, unlike the Bible, does not mention genealogies, chronological events, or minute historical details, but rather uses events from both past and present to illustrate its central message.  So, when the Quran is discussing the healing properties of honey or the life of Jesus, neither topic is an end in itself, but each is related in one way or another to the central message – unity of God and unity of the prophetic message.  No matter what the topic may be, it finds occasion to refer the discussion back to this central theme.

Another important point to keep in mind is that the Quran was not revealed in one sitting, but was revealed in parts over a span of 23 years.  Like the previous scriptures, many passages were revealed in response to specific events.  Often, Quranic revelation would come from the angel Gabriel to Prophet Muhammad as a response to questions raised by those around him, whether believers or unbelievers.  The Quran addresses the People of the Scripture (a term used by the Quran for Jews and Christians), humanity at large, believers, and, finally, it addresses the Prophet himself, commanding him what to do in certain situations or supporting him and giving him solace in the face of ridicule and rejection.  Knowing the historical and social context clarifies the text.

Some other notable features of Quran’s style are the following:

(1)  The use of parables to stir curiosity of the reader and explain deep truths.

(2)  More than two hundred passages begin with the Arabic word Qul - ‘Say’ - addressing Prophet Muhammad to say what follows in reply to a question, to explain a matter of faith, or to announce a legal ruling.  For example,

“Say: ‘O People of the Scripture!  Do you disapprove of us for no other reason than that we believe in God, and the revelation that has come to us and that which came before (us), and because most of you are rebellious and disobedient?’” (Quran 5:59)

(3)  In some passages of the Quran, God takes oaths by His marvelous creation to strengthen an argument or to dispel doubts in the mind of the listener,

“By the sun and its brightness,

by the moon when it follows it,

by the day when it displays it,

by the night when it covers it,

by the sky and He who constructed it,

by the earth and He who spread it,

Sometimes God takes an oath by Himself:

“But no, by your Lord, they will not (truly) believe until they make you, (O Muhammad), judge concerning that over which they dispute among themselves and then find within themselves no discomfort from what you have judged and submit in (full, willing) submission.” (Quran 4:65)

(4)  Lastly, the Quran has what is called ‘the disjointed letters,’ composed of letters of the Arabic alphabet which taken together do not have a known meaning in the Arabic lexicon.  Their meaning is only known to God.  They appear at the beginning of twenty nine surahs, and upon recital, each letter is pronounced and not the words they form.  For example, the first aayah of Surat-ul-Baqara appears as Alif-Lam-Mim, three letters of the Arabic alphabet pronounced individually.

A person unfamiliar with the Quran may find it a little difficult to read, especially at the start, but if they keep these points in mind, they will become more accustomed to it, and they will indeed find that even though it is a translation, it is truly profound book incomparable to any other.

May Allah (s.w.t) reward you all. This indeed is worth reading. May it benefits us (readers) and you (writer) in this world and the in the world to come.