The Authority of the Talmud in Judaism

Description: Both classical and modern-day Judaism gives precedence to the Talmud more than the Torah and other books of the Old Testament.  The article establishes the central role and authority of Talmud from standard Jewish and secular sources. 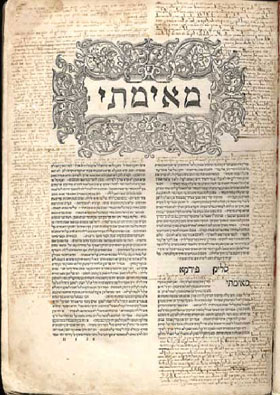 There is a misconception about Judaism common among Christians and Muslims.  This is the misleading idea that Judaism is a ‘biblical religion’; that the Old Testament has in Judaism the same central place and legal authority which the Bible has for Protestant or even Catholic Christianity.  The legal interpretation of sacred texts is rigidly fixed in Judaism - but by the Talmud, rather than by the Bible itself (Shahak 1994).  The supremacy of the Talmud over the Bible may be seen in the case of the black Ethiopian Jews.  Ethiopians are very knowledgeable of the Old Testament.  However, their religion is so ancient that it pre-dates the Talmud, of which the Ethiopians have no knowledge.  The New York Times wrote, “The problem is that Ethiopian Jewish tradition goes no further than the Bible or Torah; the later Talmud and other commentaries that form the basis of modern traditions never came their way.”[1]  Because they are not versed in Talmudic tradition, the black Ethiopian Jews are discriminated against and have been forbidden to perform marriages, funerals and other services in the Israeli state.  It is the natural consequence of Jewish belief of considering the Talmud superior to the Torah.  The Talmud states,

Rabbi Adin Even Israel Steinsaltz is the founder of the Israel Institute for Talmudic Publications, and has enjoyed the backing of Israeli presidents and prime ministers; he is a recipient of Israel’s highest civilian honor, the Israel Prize.  He is currently translating the Talmud into English, French, and Russian.  He writes,

“If the Bible is the cornerstone of Judaism, then the Talmud is the central pillar, soaring up from the foundations and supporting the entire spiritual and intellectual edifice.  In many ways the Talmud is the most important book in Jewish culture, the backbone of creativity and of national life.  No other work has had a comparable influence on the theory and practice of Jewish life, shaping spiritual content and serving as a guide to conduct.”[2]

“Historically speaking, the Talmud is the central pillar of Jewish culture.  This culture is many faceted, but each of its numerous aspects is connected in some way with the Talmud.  This is true not only of the literature that deals directly with the interpretation or continuation of the Talmud, but also of all other types of Jewish creativity.”[3]

The importance of the Talmud and its authority can be understood by what the Universal Jewish Encyclopedia states,

“The Talmud is undoubtedly one of the most remarkable literary productions of all times.  It is an encyclopedia covering the whole scene of human life.  It is almost impossible to convey to one who has not spent years in the study of this complex work an idea of its true nature, as even the most exact translations cannot catch the inner spirit of the Talmud … As a repository of the Oral Law, the Talmud’s authority is regarded as divine by Orthodox Jews, and hence it is held to be binding and immutable.  Conservative and Reform Jews, however, do not recognize the absolute binding power of the Talmud, although they acknowledge the great part it has played in determining Jewish religious ideas and observances.”[4]

Herman Wouk is a Pulitzer Prize-winning author of eleven novels, three plays, and two works of nonfiction.  In his book, This is My God; the Jewish Way of Life, serialized in the New York Herald-Tribune in 1959, he wrote:

“The Talmud is to this day the circulating heart’s blood of the Jewish religion.  Whatever laws, customs or ceremonies we observe — whether we are Orthodox, Conservative, Reform or merely spasmodic sentimentalists — we follow the Talmud.  It is our common law.”[5]

Role of Talmud in Contemporary Judaism

The Talmud is not an ancient document with no relevance to modern Judaism.  On the contrary, Encyclopedia Britannica tells us that with the rebirth of a Jewish national state since 1948 and the revival of Jewish culture, the Talmud has achieved renewed importance.  Orthodox Judaism has always focused upon its study and has believed it to be the absolute religious authority.  It has become one of the aims of religious (Orthodox) Jews there to establish the law of Talmud as the general law of the state.  Aside from Israel, the legal system described above has continued to function down to the present day in Jewish communities all over the world.  The jurisdiction of rabbinic courts is voluntarily accepted by Orthodox Jews.  These courts continue to exert authority, especially in the areas of family and dietary law, the synagogue, and the organization of charity and social activity.  Furthermore, Conservative Judaism, too, has always been committed to the Talmud.  Thus, a network of day schools and higher institutions of learning in which the Talmud occupies a major role in the curriculum has been established.  Scores of young Conservative Jews now search in the Talmud for answers to their crucial problems.[6]

[5] Herman Wouk, This is My God; the Jewish Way of Life quoted by Elizabeth Dilling in The Jewish Religion: Its Influence Today, page 2.

I agree entirely with this article. I was also under the misconceptions mentioned in the article about the source of Jewish traditions and beliefs. A Jewish acquaintance expressed the same views as herein to me just a few hours ago....Well done. Well researched. More grease...