Is the Quran Authentic?

Description: The Quran is the final and authentic book revealed by God Al-Mighty. 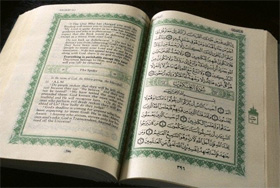 The Quran, sometimes called the Holy Quran or the Noble Quran is the divine scripture or sacred text of the religion of Islam.  Muslims believe that the Quran is the literal word of God.  It was revealed to God’s final messenger Muhammad, to bring humankind out of the darkness of polytheism and ignorance and into the light of Islam.  Quran confirms the books that were sent before it, including the Jewish Torah and the Gospels of Jesus.  It became the book of guidance for all humankind.  Quran abrogates all scriptures before it.  It contains signs of God’s greatness, miracles, parables, and lessons.  The Quran explains the names and attributes of God and His creation.  It calls us to believe in God, His angels, His Books, His Messengers, the Last Day, and in in fate or the divine decree.

“And We have sent down to you the Book (the Quran) as an exposition of everything, guidance, a mercy, and glad tidings for those who have submitted themselves.” (Quran 16:89)

“The Messenger (Muhammad) believes in what has been sent down to him from his Lord and (so do) the believers.  Each one believes in God, His Angels, His Books, and His Messengers.  (They say)  ‘We make no distinction between one another of His Messengers’ — and they say, ‘We hear, and we obey.  (We seek)  Your forgiveness, our Lord, and to You is the return (of all)’”. (Quran 2:285)

“And We have sent down to you (O Muhammad) the Book (this Quran) in truth, confirming the Scripture that came before it and trustworthy in highness and a witness over it (old Scriptures).” (Quran 5:48)

The Quran is the greatest of all scriptures.  Through it, God speaks to humankind.  He shows us His mercy, His love, His justice, and His wisdom.  It is guidance, and a comfort to the heart.  It is a most important book indeed.  How then can we be sure that God’s words have not be changed or lost?  How can we be sure that the Quran we hold in our hands today is authentic?

Muslims have no doubt that Quran is exactly the same today as it was more than 1400 years ago when it was first revealed to Prophet Muhammad.  The authenticity of Quran is  established in several ways.  The most important way we can be sure that the Quran is authentic is the fact that when God revealed the Quran, He promised to preserve it.

“It is We Who have sent down the remembrance (i.e. the Quran) and surely, We will guard it from corruption.” (Quran 15:9)

In the time of Prophet Muhammad, may the mercy and blessings of God be upon him, the Arabs, although predominantly illiterate, were masters of the spoken word.  Their poetry and prose were considered outstanding, and a model of literary excellence. When Prophet Muhammad recited the Quran – the words of God – the Arabs were moved tremendously by its sublime tone, eloquence, and extraordinary beauty.  The Quran was Prophet Muhammad’s miracle from God.

The Quran was also preserved by the people around Prophet Muhammad, they  memorised the words of the Quran as they were revealed and  paid careful attention to each word. Until today there are people who memorize the Quran with direct chains of memorization that span back to the Prophet, may the mercy and blessings of God be upon him, himself. Besides this record of memorization there is the written record as well, whereby trustworthy scribes wrote down the revelation. They wrote on flat stones, bark, bones, and even animal skins.

Prophet Muhammad himself supervised the memorisation and writing of the Quran.  The preservation of Quran was also a major priority for the four men destined to follow Muhammad as leaders of the Muslim nation.  Through their extraordinary effort and by the permission of God the Quran came to be written in book form.  Generation after generation, one after the other, went to great lengths to preserve the word of Quran exactly as they were revealed.

One of Quran’s most remarkable qualities and another reason for believing its authenticity is the complete consistency between the Quran and many of the discoveries of modern science.  Quran even pre-empts facts only discovered in the last 50 years or less.  More information about the marvellous symbiotic relationship between the Quran and scientific discoveries can be found on this website in the section entitled The Scientific Miracles of the Holy Quran.  Dr Maurice Bucaille, a French medical doctor specialising in gastroenterology had the following words to say about the scientific information contained in Quran.

“The Quran follows on from the two Revelations that preceded it,  and it  is not only free from contradictions in its narrations, but provides a quality all of its own for those who examine it objectively and in the light of science, i.e. its complete agreement with modern scientific data.  What is more, statements are to be found in it (as has been shown) that are connected with science: and yet it is unthinkable that a man of Muhammad’s time could have been the author of them.  Modern scientific knowledge therefore allows us to understand certain verses of the Quran which, until now, it has been impossible to interpret.”

The Quran used by more then 1.5 billion Muslims throughout the world today is known as the Uthmani Quran.  It was compiled by the third leader of the Islamic nation, Uthman ibn Affan, and copies were distributed throughout the Caliphate.  Each book is a copy of the original and it is believed that two of these original copies exist to this day in Turkey and Uzbekistan.

The words of Quran have remained unchanged. Over the centuries Muslims and non Muslims alike have examined copies of Quran more than 1000 years old and found that they are all identical, apart from the introduction of vowel marks in the 7th century CE. These marks were introduced to further guard the authenticity of Quran by demanding strict adherence to pronunciation rules.

The preservation of Quran is a tale of wonder and amazement. It is a testament of God's love for humankind, a book of guidance and a source of comfort. Muslims around the globe bear witness that it is the divinely revealed words of God.  Words from the Most Merciful to His slaves.  From the moment it was revealed to Prophet Muhammad it has been protected and preserved by God from the corruption of mankind and generations of men, women, and children have stood guard over Quran with their hearts, minds and lives.

Wonderful. I love this site!